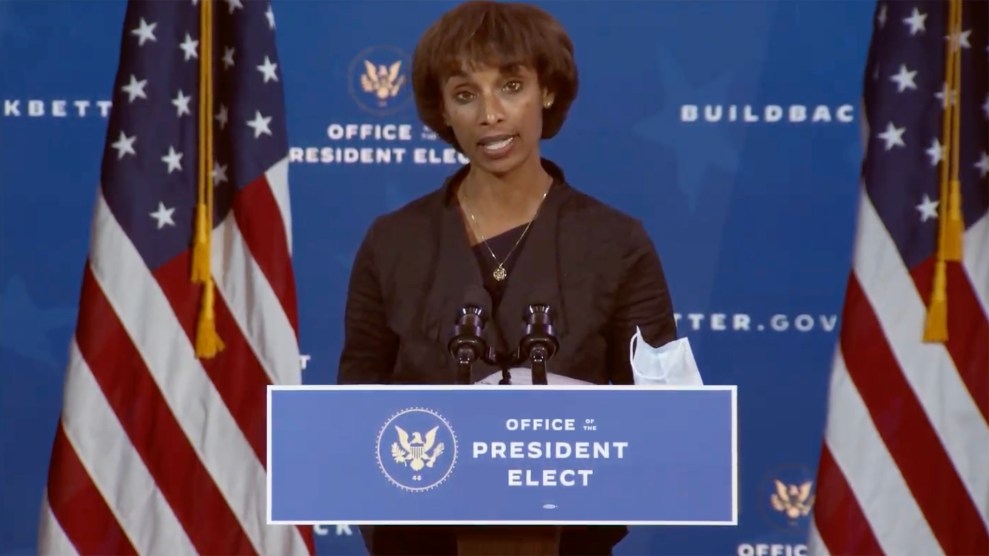 When it comes to advising a new president facing competing economic priorities through a recession, Cecilia Rouse—President Joe Biden’s choice to serve as his top White House economist—has a lot of experience.

On Thursday Rouse, a Princeton economist and dean, will go before a Senate committee seeking confirmation to lead the Council of Economic Advisers—the three-member group tasked with guiding White House economic policy. From 2009 to 2011, Rouse was a member of the CEA in the early years of President Barack Obama’s administration, as millions of Americans were out of work, and struggling to stave off eviction, hunger, and any further slide into poverty.

Rouse would be the first African American to chair the Council of Economic Advisors.

If confirmed, Rouse’s appointment would itself be historic—making her the first African American to chair the CEA since it was established in 1946. In her new role, she’ll face a moment of history similar to twelve years ago, but with one key difference: The pain of the COVID economic crisis is more unequally distributed than any other in recent memory, with health and economic impacts being disproportionately felt by low-wage workers, mothers of school-age children, and Black Americans.

Through her work as a labor economist and government official, Rouse has spent three decades steeped in the data, research, and policy thought underpinning these forms of inequality. Her academic research has focused on how workers, women, low-income students, and others face uneven opportunities, including extensive work examining inequality and discrimination. Other economists and colleagues say that background situates her well to help steer administration policy during and beyond this crisis.

“She is someone who is used to thinking about how the real world and economic theory connect, and how policies influence the real world,” says Jay Shambaugh, an economist at George Washington University who served on the CEA during Obama’s second term. “She is very well placed to handle a job like this, as this CEA faces a huge set of challenges.”

While Rouse has repeatedly researched labor market inequity, her most famous paper is a 2000 co-authored study that gathered years of professional orchestra records, revealing gender discrimination in the hiring of musicians and the extent to which blind auditions improved female applicants’ job prospects. Austan Goolsbee, a University of Chicago economist who chaired the CEA when Rouse was a member, told the New York Times that he expects Rouse to bring her labor market expertise to bear as leader of the CEA by focusing on the issues facing workers in the gig economy—a growing class legally regarded as independent contractors who tend to earn lower wages and few benefits.

Rouse has also carved out a particular focus on the economics of education, researching topics like college financial aid and how student loans affect employment choices. Shambaugh says such research will enable Rouse to serve “a crucial role” in crafting policy targeting the educational inequity issues—from student debt to college affordability—that Biden has vowed to prioritize.

Unemployment—which has, every week since the start of the pandemic, been worse than it was at the depths of the Great Recession—will be a key issue for the CEA in the coming months. It’s proven to be one of the most intractable pieces of the COVID economic crisis, as industries like hospitality and food service have severely contracted under social-distancing. It’s also been hotly debated, with some Republican lawmakers insisting, in an idea disavowed by many economists, that expanded pandemic-era unemployment benefits have served as a disincentive to work.

“A lot of the policies that are being proposed as part of these big COVID [relief] packages are things that labor economists study,” says Black, another former CEA member. “’If you extend benefits, does it provide a work disincentive?’ There’s a lot of economic research that has spent time trying to identify these things. So she and Heather and Jared will be well placed to advise the president on what the research is showing.”

“She is very well placed to handle a job like this.”

Biden’s CEA will also have to maintain a dual focus as it works not only on immediate economic policy questions, notes Shambaugh, but on structural issues that predate the pandemic, like racial justice, rising income inequality, and climate change.

“It’s going to be a challenge for the administration and the CEA to make contributions on both fronts,” he says. But it’s a challenge that Shambaugh, who was a CEA staffer when Rouse served on the body under Obama, says she has handled before when she helped juggle 2009 economic recovery efforts alongside Obama’s more ambitious proposals, like the health care system overhaul that became the Affordable Care Act.

“They were trying to move that along and at the same time deal with the biggest economic crisis we’d had since the Great Depression,” he says. “Now she’s coming back in not the exact same situation, but again with an economy in real struggle—and a lot of other things to worry about.”