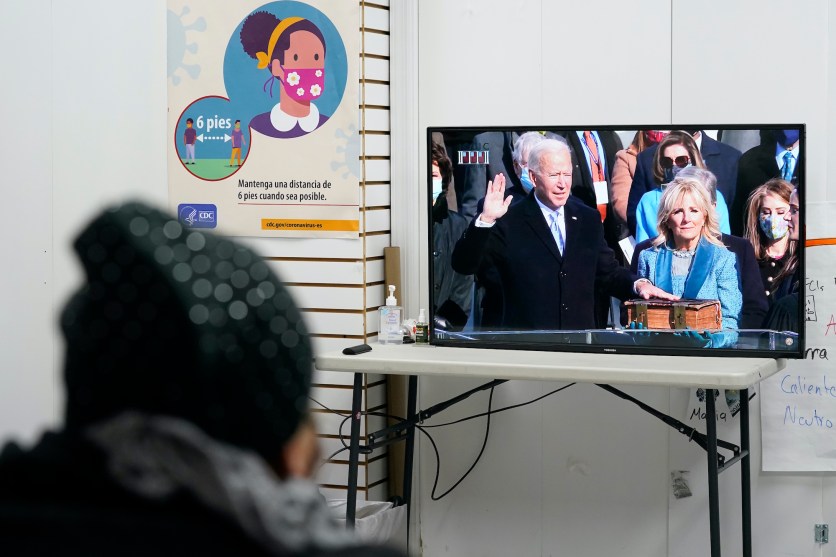 A woman from El Salvador watches as President Joe Biden takes the oath of office.Kathy Willens/AP

On Tuesday night, the acting Department of Homeland Security secretary David Pekoske signed a memorandum implementing a 100-day moratorium on certain deportations starting January 22. The measure was announced as part of an agency-wide directive to review policies and practices—including those regarding detention and cooperation with local and state law enforcement—and ensure “a fair and effective immigration enforcement system” based on “sensible priorities” and limited resources. The halt in deportations applies to all immigrants with orders of removal as long as they were in the United States before November 1, 2020, don’t present a national security or terrorism threat, and are not required to be deported by the law.

The memo also indicates that the Biden administration’s overall enforcement priorities starting in early February will focus on recent arrivals at the border, national security threats, and those considered a public safety threat who have been convicted of aggravated felonies, which can range from theft to presenting false documents. The enforcement priorities would apply not only for deportations, but also arrests, detention, and other actions. Setting forth these priorities are another way in which the new administration is distancing itself from its predecessor’s approach in which all undocumented immigrants became a target for potential deportation. Even on Trump’s last day in office, deportation flights to Mauritania and Haiti continued to depart.

Immigrant rights groups had been hoping and calling for the new administration to follow through with the promise to halt deportations. New York City Public Advocate Jumaane Williams was among those using Twitter to call for the president to immediately institute a deportation moratorium, saying “more must be done to create justice for immigrants.”

BREAKING: Today’s celebration ain’t over yet, Biden admin just announced a 100 day moratorium on deportation. We made this happen!! #Undeniable Immigrant youth traveled to Iowa back in 2019 to make this demand of candidate Joe Biden, and today we delivered. More details soon. pic.twitter.com/2aJ2GymZpW

President Biden comes to this issue with some baggage from his time as vice president in the Obama administration. During Obama’s eight years in office, about 3 million people were removed from the United States, many of whom had been convicted of minor offenses or had no criminal record at all. During the campaign, Biden criticized the Obama administration’s record on removals—which earned the president the nickname of Deporter-In-Chief— describing the policies as a “big mistake.” In a February interview with Jorge Ramos on Univision, Biden said, “It was too many,” and, “it took too long to get it right.”

On March 15, 2020, Univision news anchor and presidential debate moderator Ilia Calderón addressed then-presidential hopeful Biden: “What commitment will you make tonight, that as President, you won’t deport millions again?” In response, Biden said “no one will be deported at all” during the first 100 days of his administration. Later, he added, only immigrants who committed felonies would face deportation. “It’s about uniting families,” Biden said. “It’s about making sure that we can both be a nation of immigrants, as well as a nation that is decent.”

“It’s about uniting families. It’s about making sure that we can both be a nation of immigrants, as well as a nation that is decent.”

On inauguration day, Biden sent Congress a comprehensive immigration bill that would create paths to citizenship for millions of undocumented immigrants, but the proposed legislation is likely to face roadblocks, with a number of GOP elected officials already criticizing the proposal. Biden also wasted no time and signed several executive orders reversing harmful policies implemented by the Trump administration, including the Muslin ban.

Advocates and immigration lawyers see these measures as first steps in the right direction and victories that are the results from extensive grassroots organizing. But many say they aren’t enough.

“A deportation moratorium is a good thing, but it should go further to cover arrests/detention,” Alina Das, a professor of clinical law and co-director of the immigrant rights clinic at NYU, tweeted on Wednesday.

Several organizations have also urged the new administration to prioritize the release of all immigrants from detention centers, especially during a pandemic. In a letter to Biden’s Homeland Security secretary nominee Alejandro Mayorkas, the American Civil Liberties Union asked that ICE review the current cases of people in detention and release them “unless it finds by clear and convincing evidence they are a danger or flight risk.” There are currently 14,715 immigrants detained, according to ICE data.

Immigration lawyers also have expressed concern over the fact that a 100-day moratorium could result in prolonged detention, for instance, in cases when the person has no relief from deportation available. “Some folks would rather be released within the US and leave on their own or be removed to get back home to their families,” Memphis-based immigration lawyer Lily Axelrod told me. “Keeping them in detention for another three-and-a-half months could be a public health and human rights nightmare.”

The document released by DHS on Wednesday allows for immigrants to waive their right to stay in the country if they are made “aware of the consequences” and had the opportunity to access counsel. That particular point has raised questions and skepticism among immigration lawyers about how the agency can enforce this rule and the potential for ICE to coerce and pressure people into self-deporting.

“It’s amazing that we have anyone detained during a pandemic,” Axelrod said. “People are sitting in jail cells and being warehoused for logistical reasons, not to be punished for a crime. In addition to the torture of being detained, they are now at risk of contracting the virus without being able to protect themselves.”

Ending detention contracts and phasing out the system should be key parts of this "comprehensive review." Not doing so will inevitably mean more unnecessary harm to immigrant communities and those seeking asylum in addition to continued spread of the virus. #FreeThemAll