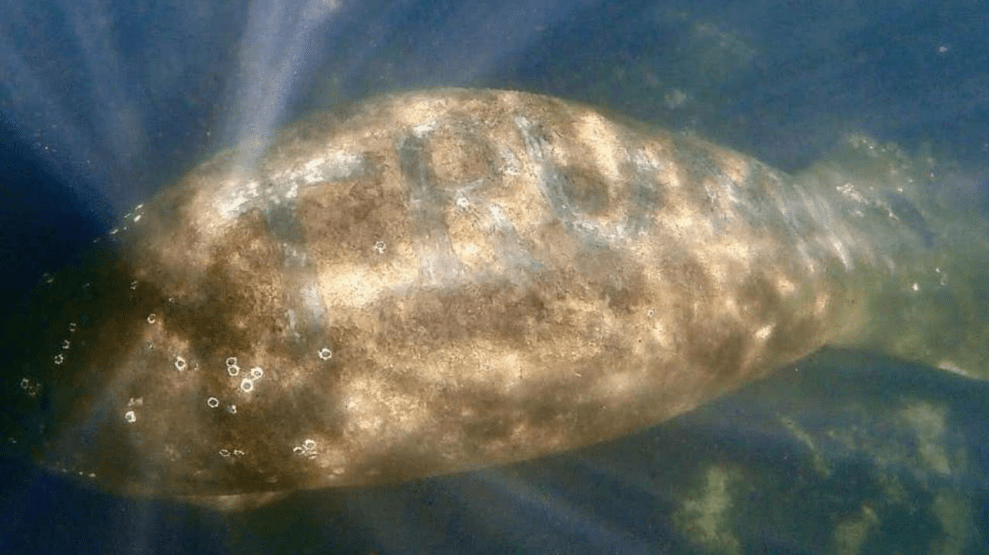 Manatee with 'Trump' etched onto its back spotted in the US. Twitter/@savethemanatee

The US Fish and Wildlife Service has shed some light on viral photos and video of a Florida manatee with the name “Trump” on its back.

On Tuesday, the local newspaper Citrus County Chronicle reported that a West Indian manatee discovered Sunday in the Homosassa River “had the word ‘Trump’ scraped into its back.”

That same day, posts featuring photos and a video of a sea cow with President Donald Trump’s name “scraped” or “carved” into its back circulated on Twitter.

⚠️HELP FIND WHO MUTILATED A MANATEE: U.S. Fish and Wildlife Service is investigating who carved the word "Trump" on a Florida manatee. USFWS is looking for any information: cal Florida Fish and Wildlife Conservation hotline at 888-404-3922. https://t.co/FXQ2l3fYTj pic.twitter.com/jI9kL1BNe5

“The U.S. Fish & Wildlife Service is investigating the harassment of a manatee…reported to federal authorities over the weekend discovered w/ words "Trump" scraped in its back …discovered in Blue Hole on the Homosassa River” (via @CitrusChronicle )
–
Insurrectioning wildlife? pic.twitter.com/PvzI3pZ5Xn

A spokesperson for the Fish and Wildlife Service told HuffPost via email that the federal agency is “investigating this matter” but added that the manatee “does not appear to be seriously injured.”
The letters seem to have been formed by someone scraping away sections of the algae on the manatee’s back, the FWS spokesperson explained.

“It’s a little hard to see the extent of damage from the video,” she said. “It is harassment, regardless. If the scrape penetrates the skin, then it likely caused some pain and stress. The animals have nerves and sensory hairs in the skin. Additionally, open wounds could become infected.”

But even if no physical damage was done to the animal, the act is still likely a crime. “Harassing or harming a West Indian manatee in any way (including touching or writing on it) is a violation of the Endangered Species Act and the Marine Mammal Protection Act,” the FWS spokesperson said. The agency could not provide any photos or video of the harassed manatee.

“West Indian manatees are essential members of the ecosystems in which they inhabit and are protected under the Endangered Species Act and the Marine Mammal Protection Act,” Aurelia Skipwith, director of the FWS, said in a statement sent to HuffPost.

According to the FWS website, there are more than 6,300 manatees in Florida ― a significant increase from the estimated 1,267 in 1991.

Yet it seems that 2020 wasn’t a great year for Florida manatees, the Miami Herald noted earlier this week. The newspaper reported that 10 manatees were crushed or drowned by floodgates and locks, per the Florida Fish and Wildlife Conservation Commission’s preliminary mortality report. That is twice the number of manatees killed by flood control structures the previous year. And Florida boaters remained a huge threat to the survival of manatees, killing more than 130 in 2019 and at least 90 in 2020, according to the mortality report.

Skipwith added in her statement that the federal agency is working closely with the state’s conservation commission.

The FWS director urged anyone with information regarding this case to call the wildlife crime tips hotline at 1-844-397-8477 or email FWS_TIPS@FWS.GOV.

The story has been updated with more information on the nature of harm to the manatee.