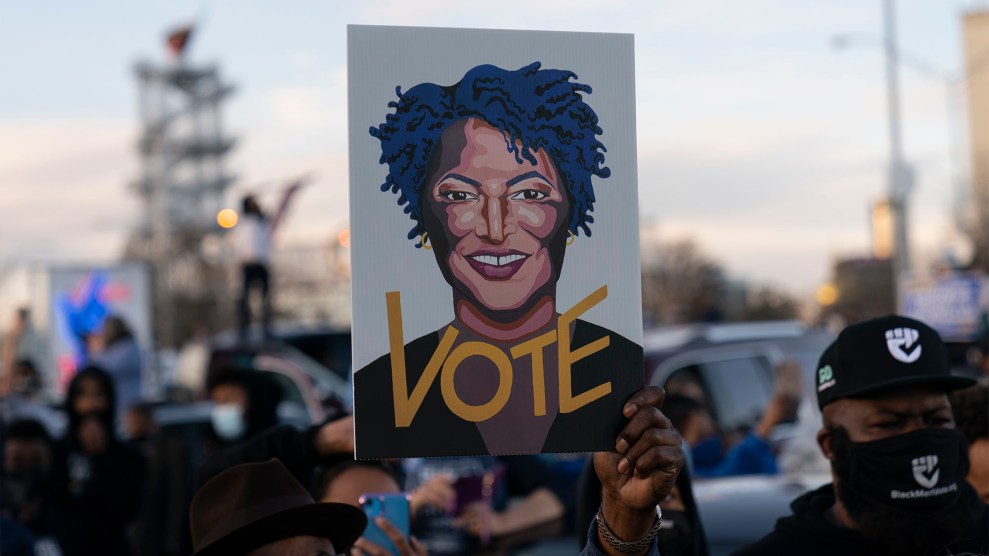 People in the crowd hold up an image of Stacey Abrams as President-elect Joe Biden speaks in Atlanta, Jan. 4, 2021, to campaign for Georgia Democratic candidates for U.S. Senate, Rev. Raphael Warnock and Jon Ossoff. Carolyn Kaster/AP

Georgia set up runoff elections in the early 1960s for the explicit purpose of disenfranchising Black voters. Segregationist state Rep. Denmark Groover called them “a means of circumventing what is called the Negro bloc vote,” by preventing Black voters from electing candidates with a plurality of the vote. Since then, the electorate in runoffs has been smaller, older, whiter, and more Republican than in general elections.

But that trend was decisively reversed on Tuesday when Black voters turned out in record numbers—likely even surpassing their turnout in the November presidential election—to lead a multiracial coalition that elected Democratic candidates Raphael Warnock and Jon Ossoff to the US Senate. (Ossoff’s race has not been called, but he leads incumbent Republican David Perdue by 17,000 votes and is expected to win most of the outstanding ballots.)

In past runoff elections, which have overwhelmingly favored Republicans, turnout dropped by more than 40 percent compared to the general, but turnout in the January 5 runoffs approached 90 percent of what it was in November. A big reason why: Nearly 50,000 Black voters who didn’t vote in November cast ballots during the early voting period, according to Tom Bonier, who runs the Democratic data firm Target Smart. Though votes are still being counted, Bonier tweeted that it was “likely that more Black voters cast a ballot in this election in Georgia, held in early January, than have voted in any election in the state, ever.”

Looks like strong Black turnout is what's powering Democrats to likely victories in both Senate races.

Counties that are <10% Black barely shifted from the general election to the runoff.

The Democratic victories are in large part a result of determined organizing by Stacey Abrams, the 2018 gubernatorial candidate and organizer, and many other Black activists and groups in Georgia, who created the conditions for Biden’s surprise victory in November—and the even more surprising Senate victories in January—by focusing on removing barriers to the ballot box and engaging communities of color who had been ignored by Democrats in past campaigns.

Abrams founded the New Georgia Project in late 2013 with the goal of registering hundreds of thousands of voters of color in the state and creating a “New American Majority” powered by people of color, young voters, and women. Warnock became its chairman.

Widespread voter suppression against Black voters—from purging the voting rolls to closing polling places to blocking registration drives—thwarted Abrams’ 2018 bid to become the first Black woman governor in US history. But after that crushing defeat, she and other Black organizers doubled down on their goal of creating a multi-racial electorate that would turn the state blue, as I reported in December:

A host of Black-led organizing groups, from Fair Fight to Black Voters Matter to the New Georgia Project, channeled their anger over what happened in 2018 into concerted efforts to remove barriers to the ballot box. LaTosha Brown of Black Voters Matter compared it to a scene in the ESPN documentary The Last Dance where Michael Jordan loses a key playoff game and shows up to practice the next day furiously motivated. “We took the energy of what happened to us with voter suppression and literally redirected that energy to be a motivating factor to organize and energize people,” she says.

After Biden’s victory in November, far more money, resources, and organizing power poured into Georgia than in past runoffs, with the specific goal of getting communities of color back to the polls. The New Georgia Project, which has registered 500,000 new voters since Abrams founded it, knocked on 2 million doors, texted 3 million voters, and made 5 million phone calls. Abrams’ voting rights group Fair Fight, which focuses on advocacy and litigation in addition to registration and mobilization, raised $22 million between November 24 and December 16 and gave it to grassroots groups working to register and mobilize voters of color. Brown and her co-founder Cliff Albright traveled across the state in the “Blackest Bus in America” handing out voter registration and turnout materials in Black neighborhoods, along with Thanksgiving turkeys and Christmas presents.

These efforts paid off and have created a political playbook for Democrats that puts organizing against suppression and engaging communities of color at its center. History came full circle on Tuesday night when votes from DeKalb County in metro Atlanta, which is 54 percent Black and part of John Lewis’ former congressional district, put Warnock in the lead around 11 p.m. and then Ossoff ahead in the early hours of the morning.

As a Black teenager growing up in Waycross, GA in the 1950s, my mom used to pick somebody else's cotton. Today, those 82 year old hands picked her son to be a United States Senator from Georgia. God bless her, and God bless America. pic.twitter.com/8nb9Jn2qqS

Warnock’s parents were born under Jim Crow and couldn’t vote for many years because of literacy tests and poll taxes designed to disenfranchise Black votes. His mother picked cotton to help support the family. Now he has defeated a system designed to protect white supremacy—and overcome barriers to the ballot box that for so many years continued to suppress Black voters. “Because this is America,” Warnock said in his victory speech on Tuesday night, “the 82-year-old hands that used to pick somebody else’s cotton went to the polls and picked her youngest son to be a United States senator.”