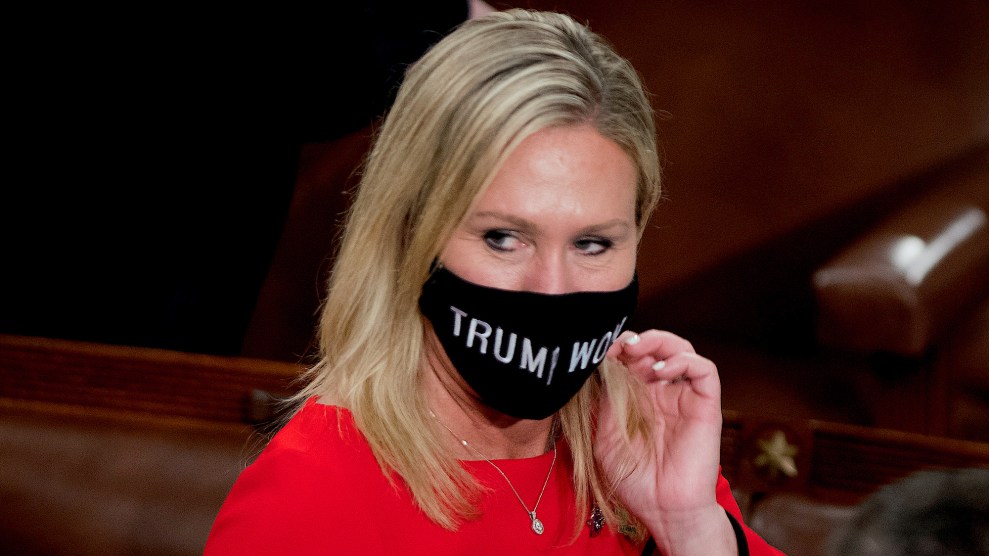 Evidence continues to emerge that Rep. Marjorie Taylor Greene of Georgia has over the past several years promoted deranged conspiracy theories and endorsed violence against perceived political enemies. The latest revelations this week about the newly elected Republican congresswoman included her suggesting in videos and online comments that the Sandy Hook and Parkland mass shootings were hoaxes and promoting claims that Hillary Clinton gruesomely murdered children. Content from Greene’s social media pages uncovered by CNN and others also showed her endorsing calls to execute FBI agents deemed disloyal to President Donald Trump and to target top Democrats, including “a bullet to the head” for Speaker Nancy Pelosi.

On Twitter, Greene called CNN’s story a “hit piece on me focused on my time before running for political office,” while also suggesting that responsibility for the content lay with “teams of people” managing her social media accounts. But previously unreported video footage obtained by Mother Jones reveals that Greene continued using violent rhetoric just before the November elections.

On October 27, one week before Election Day, Greene sat down for a live interview with pro-gun activist Chris Dorr broadcast on Facebook from a Pennsylvania gun shop. In the 22-minute video, posted by the Pennsylvania Firearms Association, the two held forth about the Second Amendment and the necessity of backing Trump and other far-right Republicans in the election. Greene warned ominously about fending off “socialists” like Joe Biden and Bernie Sanders, claiming they would confiscate Americans’ guns. “If this generation doesn’t stand up and defend freedom, it’s gone,” Greene said, addressing viewers. “And once it’s gone, freedom doesn’t come back by itself. The only way you get your freedoms back is it’s earned with the price of blood.”

“This is it,” Greene went on to say. “November 3rd, freedom is on the ballot.” Americans who didn’t vote for Trump and Republicans down-ballot, she said, would be voting “to completely end America as we know it” and would no longer be able to “stop a tyrannical government.”

It wasn’t the first time that Greene campaigned using menacing gun imagery. In September, a post on her official Facebook page showed her posing with an assault rifle next to photos of Democratic Reps. Alexandria Ocasio-Cortez, Ilhan Omar, and Rashida Tlaib, with Greene referring to them as “Hate America leftists” who want to “take this country down.”

After Trump was defeated and spent two months inciting the deadly insurrection at the US Capitol, Greene continued to support the outgoing president’s baseless claims that the presidential election was “stolen” through massive fraud. She even wore a face mask in the House chamber bearing the slogan “Trump won.”

On Thursday, Democratic congressional leaders continued to blast their counterparts over Greene, an open QAnon supporter, and other GOP members furthering Trump’s insurrectionist politics. “The enemy is within the House of Representatives, a threat that members are concerned about, in addition to what is happening outside,” said Speaker Pelosi, during an extraordinary press conference. Asked by a reporter to clarify who the enemy was, Pelosi said she was talking about “members of Congress who want to bring guns on the floor and have threatened violence on other members of Congress.”

Greene’s office did not respond to a request for comment.

The stark hostilities within Congress come as the Department of Homeland Security warned this week that the country faces a rising threat from “violent domestic extremists” emboldened by the insurrection at the US Capitol on January 6. A New York Times report on Friday detailed Greene’s ties with extremist militia groups, including the Oath Keepers and Three Percenters, some of whose members participated in the assault on Congress.