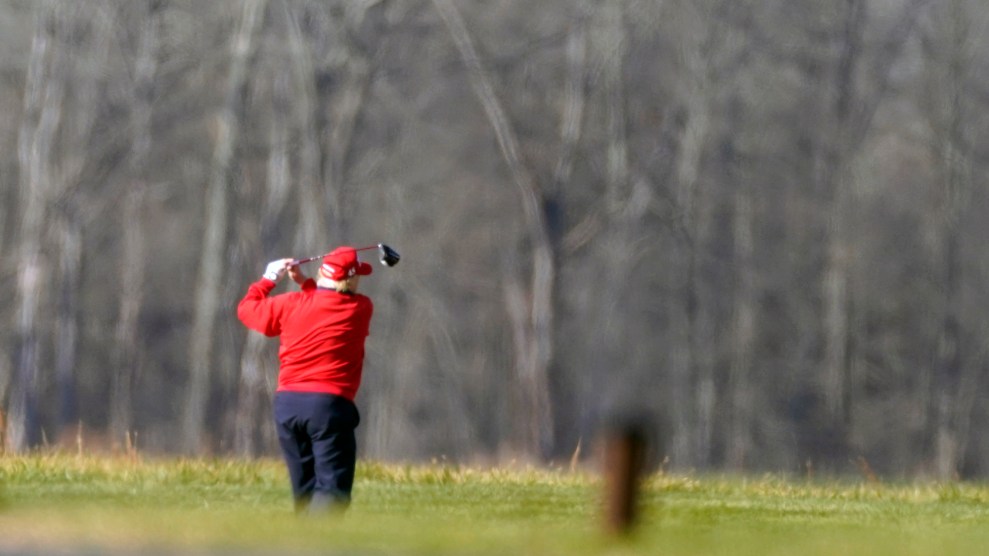 Golf has always been Donald Trump’s escape—the day the 2020 election was called for Joe Biden, he was golfing—and increasingly it’s been the future of his businesses. Despite his reputation as a New York City real estate magnate, Trump has gambled most of his future financial stability on Scottish golf courses, and some of his largest debts are tied to his Doral golf course in Florida. Trump, who cheats obsessively despite reports that he is a good golfer in his own right, has cumulatively spent nearly a year of his presidency on the golf course. But the sport seems to be done with him now.

Sunday night, the PGA of America, announced that it was nixing its plans to hold the 2022 PGA Championship at Trump’s New Jersey golf course. It’s not a small move. Championships are named far in advance—the PGA website currently lists the site of future Championships through 2034—and the PGA has been planning on using Trump Bedminster for its 2022 Championship since 2014. Since he started purchasing and developing golf courses, Trump has avidly pursued PGA events at his properties. These events not only bring media attention and crowds of visitors, but they confer the kind of acceptance Trump has always struggled to win from the moneyed and powerful classes. Losing one of the so-called four “major” golf events of the year will be a blow to his ego.

“He’s got to be devastated,” says longtime sports columnist Rick Reilly, who has golfed with Trump and wrote a 2019 book entitled Commander In Cheat: How Golf Explains Trump. “This is going to be as bad as losing the election, which he did and he can’t deny any more than he can deny he no longer has a major.”

As he has relentlessly done with his election defeat, Trump is likely to sue over the PGA’s decision. In a statement, the Trump Organization told ABC News the decision was a “breach of a binding contract.”

“He might think he can sue, but it’s over. The PGA will write whatever check they have to. He’s done.”

But Reilly notes there are limitations to litigation: “He might think he can sue, but it’s over. The PGA will write whatever check they have to. He’s done.”

In a nearly simultaneous blow, the R&A, golf’s Scotland-based governing body outside of the United States, issued its own statement early Monday morning. It announced that it will avoid using Trump’s premiere Scottish golf course, Turnberry, for the “forseeable future” for any of its championships. Turnberry is a legendary course and is one of a handful of courses in the United Kingdom that has been allowed to host a British Open Championship—one of the most prestigious events in all of golf. Trump purchased the course in 2014, and while it hasn’t hosted an Open Championship since then, the R&A stated in 2015 it wouldn’t be using it for the 2020 Championship as many had expected. Today’s announcement officially closes the door on any chance of the tournament returning.

It’s yet another major slap in the face for Trump and his striving for acceptance the higher levels of golf. The R&A is a spin-off from the Royal and Ancient Golf Club of St. Andrews, founded in 1754 and often thought of as the ancestral home of the sport.

His ego aside, all of these rejections by the powers-that-be will also seriously hurt Trump financially. According to his most recent personal financial disclosure (filed last year, and covering 2019) roughly $237.7 million, or about half, of the Trump Organization’s revenue came from the operation of his golf courses. While many in the golf world have either remained loyal to Trump or studiously apolitical over the last four years, any downturn in the appeal of his courses comes at a perilous time for the president, who faces hundreds of millions of dollars in debt coming due in the next several years.

One of the biggest is the $125 million mortgage on his Doral golf course in Florida. Like Turnberry, though far less revered, Doral is a well-regarded course with a long history that predated Trump’s 2012 purchase. It held a PGA Tour event from 1962 until 2016 when the association moved it to a course in Mexico. But the course is in need of renovation and has struggled with declining revenue since Trump took office.

Trump’s decision to build a high-end Scottish golf course in Aberdeen, in north-eastern Scotland, and then purchase Turnberry, south of Glasgow has been viewed by many in the golf industry as an attempt by Trump to claim a British Open Championship. His Scottish golf investments have cost a fortune—by his own estimates he has spent $200 million rehabbing Turnberry, and tens of millions more constructing Aberdeen. It’s not entirely clear that he had the financial resources to do so, especially as both Scottish courses have become money pits.

Neither has turned a profit while Trump has operated them, and both lost money again in 2019. In the most recent annual corporate reports filed by Trump’s corporations in the UK, the Trump Organization wrote that the impact of the COVID pandemic on the entire golf industry was “unprecedented.” Both courses were shut for much of the 2020 playing season and, even when open, were largely cut off from the well-heeled international clientele that have made up much of their business.

There have been calls by some members of the Scottish parliament for the UK government to invoke an anti-money laundering tool, called an unexplained wealth order, against Trump over the course’s finances. While top Scottish lawmakers have been reluctant to use it against a sitting president, the increasing speed at which Trump is falling from grace as his term ends may change the calculus.

Last year Trump won approval to build a potentially highly-lucrative housing development alongside his Aberdeen course. The scheme, which Trump told local planning authorities would cost around $200 million, could be a financial jackpot, but it could also be extremely risky. Although the course is generally well-regarded, it seems doubtful many people who can afford a $1 million golf villa would opt for the blustery North Sea coast for a vacation home. Plus, Trump has never built a large housing development. In the last decade, the two courses have emerged as the nexus of Trump’s future business hopes. Given his level of investment, they could either make or break him over the next few years. But the stigma from the public scolding from the R&A certainly won’t help attract the wealthy future homeowners he’s banking on.

Following the insurrection Trump incited at the Capitol last week, several prominent Scottish lawmakers began calling for the UK government to prohibit Trump from entering the country, with more lawmakers joining the campaign over the weekend. Losing any shot of hosting the British Open and seeing the world’s top golfers tee off at Turnberry under his marquee may just be the start of Trump’s Scottish problems. By the time Trump leaves office, he might be lucky just to be able play a few rounds at Turnberry himself.