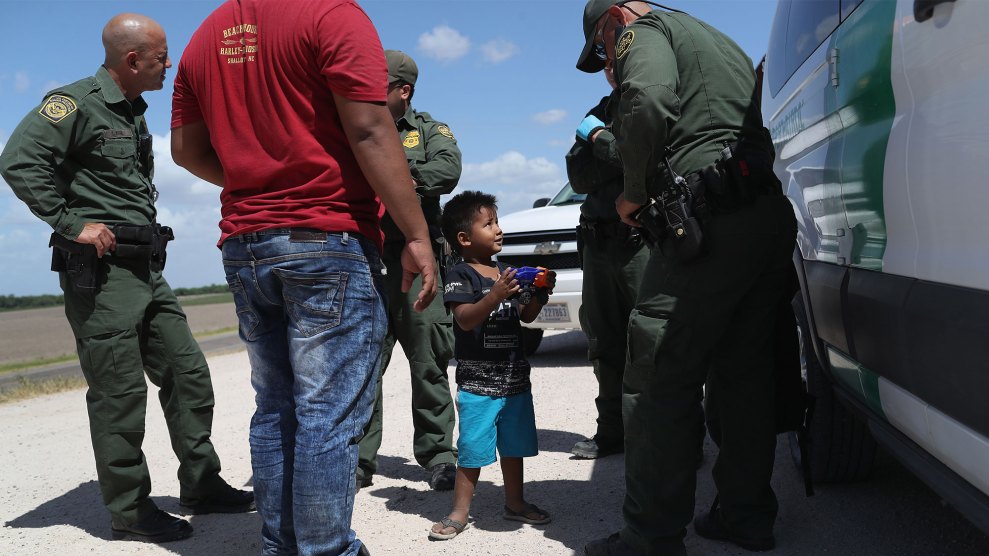 A boy and father from Honduras are taken into custody by Border Patrol agents in Texas in June 2018.John Moore/Getty Images

On his first day in office, President Joe Biden signed four executive orders undoing several of the Trump administration’s most draconian immigration policies, including ending the notorious travel ban. But immigration experts are already looking ahead to next week’s executive orders, when Biden is expected to tackle perhaps the most heinous policy of the last four years: family separation.

Trump’s so-called “zero tolerance policy,” first implemented in 2017 as a pilot program before its official rollout in 2018, led to migrant parents being separated from their children after being apprehended at the US-Mexico border. An estimated 5,500 families were separated under this policy, in which parents were sent to detention centers, prosecuted for illegal entry, and deported, while their children were ripped from their arms—sometimes literally—and treated as unaccompanied minors in the custody of the US government. All this came at the direction of then-Attorney General Jeff Sessions, who helped develop zero tolerance as part of the White House’s broader plan to deter migrants and asylum seekers from even considering coming to the United States.

Many in the immigrant rights world, including nonprofits working with children, have high expectations for the Biden White House to not only end any lingering remnants of family separation, but also to work on a reunification process for those who already suffered at the hands of the previous administration. The American Civil Liberties Union has been working to stop family separation from the beginning, suing the US government and winning in 2018 to put a stop to the policy. To this day, though, lawyers can’t find the parents for more than 600 children who remain separated. The ACLU has continued to fight this case in court, seeking damages on behalf of the thousands of parents and children who were traumatized in this process.

I spoke with Lee Gelernt, lead ACLU attorney in the family separation lawsuit, about what the Biden administration could do to right this wrong, and what to expect in the coming months and years.

First, I’d like to ask about the recent watchdog report, a very thorough investigation by the Department of Justice Office of Inspector General, that showed just how negligent the administration was when separating children and infants from their parents. What was your response when you read the report?

The report highlights that DOJ was integrally involved in family separation, and that makes sense because something this large could not have been done without the involvement of multiple agencies. The cruelty of this policy really comes through in this report—in particular, the Justice Department’s refusal to exempt even babies and toddlers from the family separation practice. The Justice Department should have known that the family separation practice was unlawful, even if they were unwilling to stop it on moral grounds.

President Biden is expected to sign something on family reunification. What do you expect from that executive order?

I do not know what the specifics will be but we expect him to be creating a task force. We hope the task force will take shape immediately and begin implementing policies right away. If the task force is not going to include non-governmental advocates who have been working on these issues for years, then at least they should be in constant communication with the task force. And we are hoping that the Biden administration will provide whatever additional information contact information. We need to find the more than 600 families that haven’t been found yet.

What are your top priorities for what Biden can do to help reunify parents and children who were separated at the border?

What would be something the Biden administration could do right away?

What could be the biggest challenges?

I think what is a longer-term issue is providing a mechanism for the families to obtain permanent legal status. But this is one of those issues that we do not believe should present real legal or political problems for the Biden administration. One thing that we saw from the family separation practice is revulsion on the part of people on both sides across the ideological spectrum. This is one of those issues that resonated with people regardless of their political affiliation, and regardless of what they think about macro immigration policy in general. What people said across the ideological spectrum is, “In the United States, we do not take small children, including babies, away from their parents.” There is no justification for that, period.

What do we as a country owe these hundreds and hundreds of families who were separated and who undoubtedly have suffered tremendously—and will continue to suffer long-term consequences from the separation?

As a country, the United States needs to eliminate the stain of this barbaric practice, and to move forward. We deliberately abused them and their children. What we did to these families was inhumane, and physicians have called it straight child abuse. So given that we abused these families and children in such a barbaric way, we need to do everything we can to make them whole. That includes not only providing them safety in the United States, but real help getting their lives back together to the extent that’s possible.

This conversation was edited for brevity and clarity.