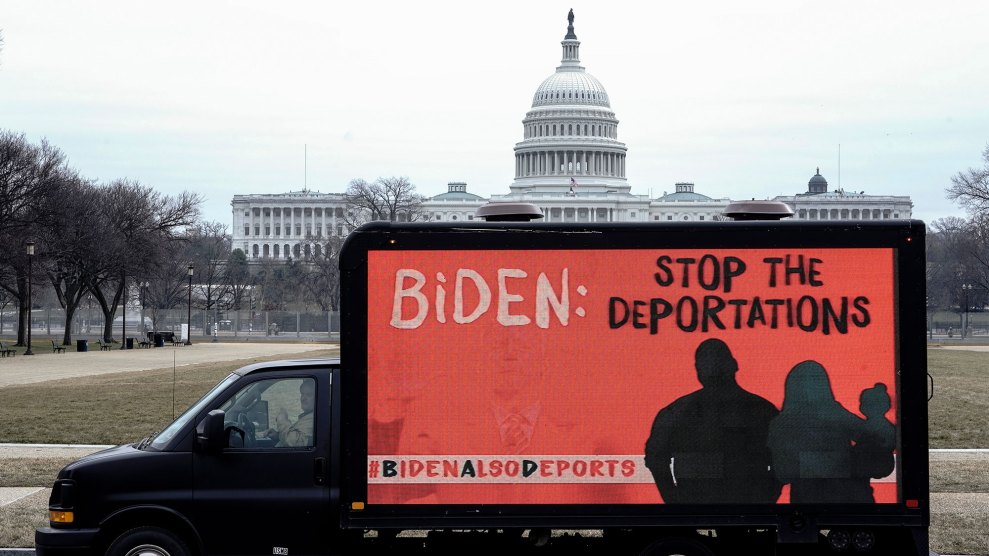 WASHINGTON, DC - FEBRUARY 15: An L.E.D. truck displaying messages expressing concern over the continuing mass deportations of Black immigrants drives past the Capitol Building prior to a #BidenAlsoDeports rally.Jemal Countess/Getty Images

When Juan Carlos Perla, his wife, and three young children first arrived in Tijuana in the winter of 2019 after fleeing El Salvador, they knew the process of asking for asylum at the border wouldn’t be easy. Donald Trump was president, after all. But they never anticipated they’d be stuck in the Mexican border city for two years. Last month, when President Joe Biden took office, Perla felt that, “God willing, something good is headed our way.”

Trump left Biden with a tight knot of immigration policy to untangle. But it’s clear from his first month in the White House that Biden is making immigration reform a top priority, even as he deals with a massive economic crisis and a pandemic that has killed more than 500,000 people. Some of the executive actions Biden has taken on immigration include: an end to the travel ban for majority-Muslim countries; halting construction of the border wall; ending new enrollments in the “Remain in Mexico” policy (officially named Migrant Protection Protocols) and starting a new system to slowly allow some asylum seekers on MPP to enter the US; an unsuccessful attempt to pause deportations for 100 days; and directing the Department of Homeland Security to form a task force to undo some of the damage caused by Trump’s family separation policy.

Even before taking office, Biden spoke of his goal to pass key reform measures, and last week his administration’s comprehensive immigration bill was introduced to Congress by Sen. Bob Menendez of New Jersey and Rep. Linda Sánchez of California. The US Citizenship Act of 2021 would give a path to citizenship to many of the estimated 11 million people living in the United States without legal immigration status. It would immediately give green cards to more than 600,000 people currently in the Deferred Action for Childhood Arrivals program, more than 300,000 people with Temporary Protected Status, and many farmworkers, making them legal permanent residents. The bill also touches on the need to address root causes for migration and the need to work with Central American countries to give people opportunities to either stay there, or apply for refugee status without having to make the dangerous trek north.

Despite the cracking pace, some immigrant rights groups say Biden should do more, and more quickly. While many welcome the change in messaging and the steps already taken, advocates worry that Biden is simply resetting the clock to pre-Trump times: The system was flawed under previous administrations, and it will take more than executive orders to make it better. And while the legislation was well received by immigration advocates, it’s unlikely to get the votes needed to overcome a filibuster in its current form. As one person close to the White House told Politico, “There’s no pathway to 60.” But that doesn’t mean no relief for immigrants is coming.

While the flurry of activity swirls at the top, it will take some time for the changes to be felt on the ground. And for the Perla family, those changes can’t come soon enough.

When they arrived at the US-Mexico border, they had to wait for months in Tijuana before they could even get a chance to petition for asylum at the port of entry San Diego in late February 2019. US border officials detained them for a few days, only to return them to Mexico, and place them on MPP. They are amongst the 70,000 asylum seekers—who are not from Mexico—forced to stay in Mexican border cities since Trump implemented the program. Of those, an estimated 25,000 still have an open case under MPP, like the Perlas.

“Like they say, after the storm comes some calm.”

Last week, Biden launched a new program to slowly start allowing those with active cases to enter the United States and finish out their cases here. The administration said people needed to first sign up using an online portal to get a date for their appointment at the border, they will get a COVID-19 test in Mexico, and then be allowed to enter and travel to their final destination. Once there, they must show up to the immigration court closest to them and may be required to wear an ankle monitor. Last Friday, the first 25 asylum seekers were allowed in, but launch day brought with it confusion at the border and problems with the website. The issues extended throughout the following days with so much delay on the phone lines and online portal that Perla’s lawyer hadn’t been able to enter them into the system by Tuesday.

“We were told to be patient because the line was too busy and the page wasn’t working,” Perla said after waiting for two years for this moment. “But hopefully we can get through and get an appointment soon so we can come in to the United States. Like they say, after the storm comes some calm.”