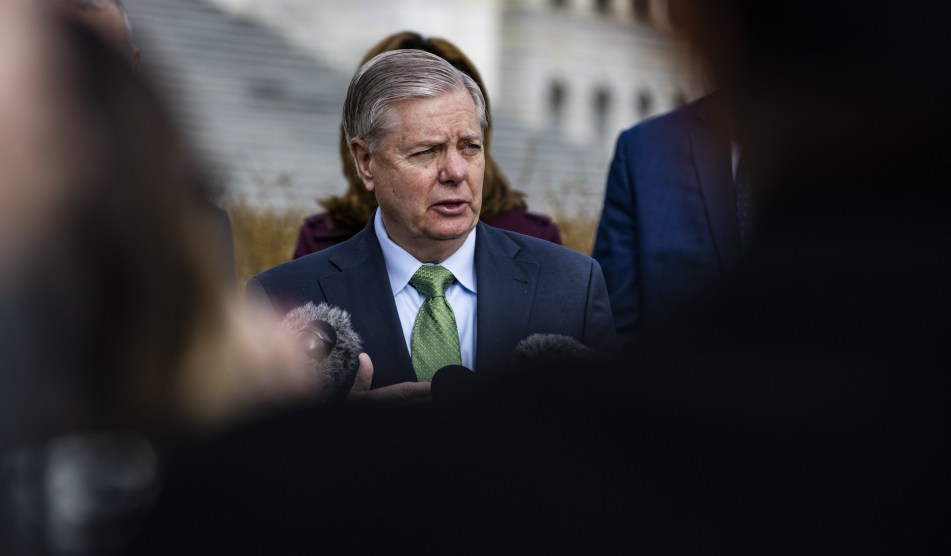 There isn’t much Sen. Lindsey Graham (R-S.C.) finds disquieting in Georgia’s sweeping new voting restrictions. But even he admitted the law’s prohibitions on providing voters with food or water as they waited in long lines to cast ballots was a bit on the draconian side.

“All I can say is that doesn’t make a whole lot of sense to me,” Graham told Fox News anchor Chris Wallace on Sunday. Wallace had asked Graham “why on earth, if Americans are willing to wait hours to vote, would you make it a crime for people to come and give them a bottle of water?”

A Republican majority in Georgia’s legislature passed the stringent new measures last week. It comes on the heels of President Joe Biden’s victory in the state—the first time a Democrat has captured Georgia’s electoral votes in nearly three decades—and a pair of Democratic wins for the state’s senate seats. Georgia is just one of many Republican-controlled states that are considering or have passed voter suppression laws after the GOP’s losses in 2020.

The provision that criminalizes providing food and water to voters has drawn particular fury from Democrats and voting rights activists. During the 2020 election, it was not uncommon for voters to wait several hours to cast their ballots in person—especially nonwhite voters, whose neighborhoods had seen a reduction in polling places as state officials shrunk the overall numbers statewide along racial lines. The new law also curbs the number of ballot drop boxes, implement strict voter ID requirements for absentee ballots, and cuts off early voting days to a time when many people are still at work.

Graham took no issue with the rest of the restrictions during his Fox News appearance, even as Wallace confronted him on their specifics. The South Carolina senator, who reportedly tried to convince Georgia’s secretary of state to discount ballots during the 2020 election, instead pivoted to a tirade against congressional Democrats for painting the GOP as racist. Graham claimed the party was using that portrayal to push for their democracy reform bill, H.R. 1, which he slammed as “the biggest power grab in history.”

“Any time a Republican does anything, you’re a racist, if you’re a white conservative, you’re a racist,” Graham said. “They use the racism card to advance the liberalism agenda. H.R. 1 is sick, not what they’re doing in Georgia.”

Graham also criticized Biden’s recent comments that the filibuster is a relic of the Jim Crow era, something that former President Barack Obama also said during a eulogy for the late Rep. John Lewis (D-Ga.).  “You know what’s sick is that the president of the United States played the race card continuously in such a hypocritical way,” Graham scoffed.

Graham and his GOP senate colleagues have been on the defensive about Georgia’s measures, dismissing the outrage that they’re trying to make it harder to vote. Speaking on Meet the Press on Sunday morning, Sen. Pat Toomey (R-Pa.) claimed that Georgia’s new law won’t suppress votes. He raised the threat of ballot harvesting, a common and baseless GOP attack. Senate Minority Leader Mitch McConnell (R-Ky.) said in a hearing this week that “states are not engaging in trying to suppress voters whatsoever.”