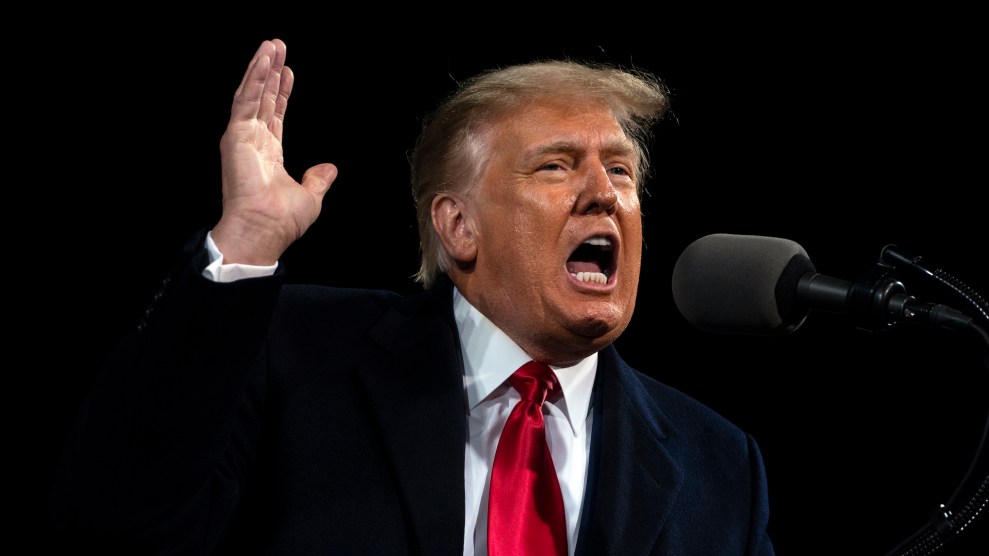 Former President Donald Trump has picked a fight with his top Republican allies, forcing a confrontation over who will control the future of his lucrative political brand. Unlike previous battles he’s fought over his personal and business brand, this is not one where his lawyers can do much. But that won’t necessarily stop him from throwing a serious monkey wrench into the gears of the giant fundraising machine he’s built over the last four years with the GOP.

“No more money for RINOS,” a statement released Monday by Trump said. “They do nothing but hurt the Republican Party and our great voting base—they will never lead us to Greatness. Send your donation to Save America PAC at DonaldJTrump.com,”

Indeed, together, Trump and the GOP have raised billions over the last four years—his name ubiquitous on fundraising appeals from the party and many top candidates, his presence a magnet for dollars at events, and his properties the hottest spot for Republican candidates to woo potential donors. The question of how that operation would be maintained now that Trump is a former president—whose personal, business, and political brand is more toxic than ever for many Americans but still adored by many Republicans—has been simmering for months. The conflict became public last week as Trump dispatched a threatening legal letter demanding top GOP PACs stop using his name and image for fundraising.

On Tuesday Trump returned to his legal threat in another statement: “I fully support the Republican Party and important GOP Committees, but I do not support RINOs and fools, and it is not their right to use my likeness or image to raise funds. So much money is being raised and completely wasted.”

It’s largely an empty threat, but for the GOP it’s an ominous sign that Trump intends to fight over every dime his political legacy is worth.

And there is a lot at stake. Since Election Day, joint Trump-RNC fundraising operations have pulled in hundreds of millions of dollars—just weeks after the election they announced they had combined to raise at least $207 million. At a time when Trump’s ability to raise funds for his personal business empire have reached a new low, his ability as a political fundraiser remains powerful.

In some respects, this is a familiar clash for Trump. While simultaneously basking in attention, Trump has always reacted strongly when anyone else garnered some success from the use of his name. Long before becoming president, he sent a series of enraged Tweets threatening the late rapper Mac Miller over his song “Donald Trump,” calling Miller “an ungrateful dog” and saying he would teach him a “big boy lesson” unless Miller shared his royalties. (Miller didn’t, and nor did Trump.) Last week, it was reported he was fuming that he felt “abused” by Republicans who used his name to fundraise without asking his explicit permission.

“The committee has every right to refer to public figures, that is unambiguously true, individuals and entities engaging in political speech can talk about people, reference people, quote people,” says Alexandra J. Roberts, a law professor who teaches trademark law at the University of New Hampshire School of Law. “If they want to refer to Trump’s policies, Trump’s supporters—that’s always fine, well within the sphere of the First Amendment.”

The RNC itself did not seem particularly concerned about the letter, sending out a slew of Trump-heavy fundraising pitches in the days since. One missive was an email encouraging recipients to send a “virtual thank you” to Trump—an expression of gratitude that required making a donation to the RNC. As long as the RNC—or any other political fundraising committee—sends messages along that line, which clearly exploit a recipient’s potential affection for Trump, but don’t make any representations that Trump is involved with the effort or is endorsing anything, there’s not much he can do, Roberts says. As far as political speech goes, a public figure like Trump can do little to prevent others from either talking about him or attempting to associate themselves with him as long as they don’t claim he’s endorsing them.

And that’s more or less exactly what the RNC’s own lawyer, Alex Cannon, told Trump in response, declaring that the GOP “has every right to refer to public figures as it engages in core, First Amendment-protected political speech, and it will continue to do so in pursuit of these common goals.”

And there are common goals—not the least of which is that Trump has recently inked joint-fundraising agreements with some of the same GOP committees, like the RNC, that had just received his lawyer’s cease-and-desist letter. The whole thing is just strange, says David Karpf, a political science professor at George Washington University.

“This is a comically absurd challenge that the former president and head of the Republican Party, is telling the Republican party you can’t use my name and likeness to raise money.”

Legally unrealistic and politically bizarre, but it should still be worrying to Republicans, especially after Trump seemed to up the ante Tuesday by explicitly encouraging supporters to donate to his political committee.

Campaign lawyers and fundraising experts say that Trump probably doesn’t really think he can win a legal fight or force the RNC to stop using his name—he’s just trying to remind everyone that he’s the reason for the GOP’s fundraising success over the last four years. The letter might have been legally laughable, but it’s a not-so-subtle invitation to sit down and negotiate with the former president.

“A cease-and-desist can go a really long way—it’s bargaining in the shadow of the law,” says trademark expert Roberts. “You know I’m not going to litigate, but the mere fact that I’m threatening means we’ll do things a little bit different, because we’d rather avoid these headlines.”

Karpf agrees and thinks the letter will probably the first of a steady stream of theatrics.

“He’s going to continue to take actions or pull stunts that make it real clear that the Republican Party is Donald Trump’s party, and that’s how I would read this,” he says. “This is a reminder from him to them that he is the golden goose and you better give him a taste if you want to go on raising money.”