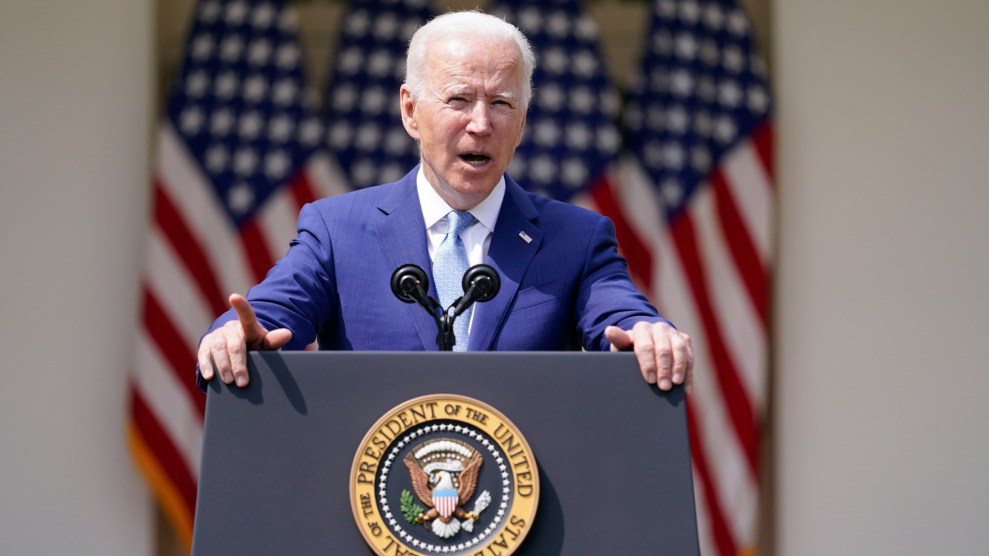 President Joe Biden speaks about gun violence prevention in the Rose Garden at the White House on April 8, 2021.Andrew Harnik/AP

Joe Biden did not mince words last week when he announced a series of executive initiatives to address gun violence. “Enough prayers,” he said. “Time for some action.”

That action included a number of Justice Department mandates aimed at curbing the carnage, including issuing guidance for states that want to enact so-called “red flag laws,” which would allow law enforcement to temporarily confiscate firearms from people deemed to pose a threat to themselves or others. He called on Congress to pass a national red flag law and urged the US Senate to pass House legislation that would require background checks for firearms purchased at gun shows and would reauthorize the Violence Against Women Act. But one of the most significant takeaways from that Rose Garden address wasn’t what Biden said, but how he framed it. In both his speech and the accompanying White House press release, the president described gun violence as a public health crisis. “Gun violence in this country is an epidemic, and it’s an international embarrassment,” Biden said.

For years, the gun control debate has been so politicized that the notion of even referring to gun violence as a public health crisis was controversial. In 1996, a small Centers for Disease Control and Prevention–funded study on the risks of owning a gun sparked a firestorm of outrage from Republicans, who then passed legislation barring the CDC, or any federal agency, from spending any federal money to study the impact of gun violence. That law—called the Dickey Amendment, after former Rep. Jay Dickey (R-Ark.), who once dubbed himself the National Rifle Association’s “point man” in Congress—had vast implications: For years, we didn’t even know how many Americans were shot each year because the CDC was barred from collecting the data.

But in 2019 Congress finally restored that funding, appropriating $25 million for firearm injury prevention research, split between the CDC and the National Institutes of Health. It was the first in a series of many steps needed to understand exactly how gun violence impacts public health and what can be done to solve the problem. And while Biden’s actions last week are a good second step, gun violence researchers say there’s still a lot of work needed to fully comprehend the issue.

As part of the new federal funding for gun violence research, Northwell Health, the largest nonprofit health care network in New York, was awarded $1.4 million in September to research the matter. Chethan Sathya, a trauma surgeon who leads Northwell’s Center for Gun Violence Prevention, recently spoke to Mother Jones about what Biden’s approach to gun violence means for the public health community, what impact the restoration of federal funding for gun violence research can have, and why people should look at gun violence as a health issue rather than a politicized battle over the Second Amendment. This interview has been edited and condensed.

President Biden, in announcing his executive actions on gun control last week, called gun violence in the US an “epidemic.” What does that acknowledgement mean for the community of medical professionals who have been studying gun violence from a public health perspective?

It is an amazing first step, and very much empowers us in the health care lane to approach gun violence as a public health issue. We are of the perspective that, because gun violence continues to be one of the leading causes of accidental death and injury in our country, this is a public health issue no different than motor vehicle accidents, substance use, or even COVID-19. And there are a number of different public health approaches and health care strategies that can be used to help curb this issue and prevent firearm injuries from an apolitical, depolarized viewpoint. This is not about gun control. This is not about the Second Amendment. This is purely about firearm safety and injury prevention.

And I think a lot of President Biden’s executive actions are geared towards that, such as support for community-based violence intervention programs, as well as increased funding for research, which is critical, because firearm injury, at this point in our country, is very akin to a new disease. We do not have good research on many, many elements, including the basic approaches to firearm injury, so a lot needs to be done to figure this out. I think the administration’s steps really send a clear message that there is a support for a public health approach to this, and I hope it’s just the first of many, because there’s a lot more that needs to be done.

Recently, the CDC and NIH was able to fund gun violence research for the first time in 25 years. What’s the benefit of having a government public health agency that is able to fund this kind of research?

It’s transformational. We were one of the few recipients of that first round [of funding], so some of our biggest research initiatives that we’re undertaking, such as our We Ask Everyone campaign—which is really the first attempt at universal screening for firearm injury risk anywhere in the country that’s ever been done. We’re only able to undertake an ambitious project like that because NIH funded it. Even just a very real example, for me, of how that funding has translated directly to us being able to do research that we never were able to do in the past. The funding is minute compared to other diseases—so much more is needed—but I think that’s an example of what it’s already done.

Have you learned anything yet from that research?

The project is geared toward implementing a universal screening and intervention effort across our [emergency departments] as a starting point, for firearm injury risk and gun violence risk, which are two different things. So we’re going to ask questions to every patient who comes into our EDs around firearm access, so that we can counsel around safety, and then also ask questions related to gun violence risk in the community so that we can then combine those patients with adequate community resources. So the unique, never-before-done kind of aspect of this research is that it’s universal, literally asking every patient. We’re aiming to ask something like 60,000 to 70,000 patients a year. And in every other hospital, this kind of questioning is targeted; you only ask a patient who’s suicidal questions about this. By asking everybody, we hope we can finally shift the paradigm and get healthcare workers comfortable talking about this, because I can tell you that what we’re learning, and what we already know, is that very few health care workers ever talk to their patients about firearms. And this has been decades in the making.

What was it like for you to work all these years as both a trauma surgeon and a researcher on gun violence and not be able to ask these sort of questions until very recently? That must have been frustrating to do this kind of research on the fringe since you couldn’t really access the support needed to do it fully.

It was. Because, you know, without top-down support and governmental support, it’s very difficult to get legitimacy to pull off these kinds of projects. But with NIH funding, that empowers me as a trauma surgeon to be able to roll out this program. This wasn’t possible before, because it’s a very polarized issue. And I think, from the health care lane, if we can figure out how to depolarize people and depoliticize this issue and have these conversations—because we haven’t figured that out yet—we could serve as an example for every other sector. And I think we are uniquely positioned to do that, because it’s from a health perspective. Not a gun control perspective.

What are some other big hurdles that you see in being able to take gun violence research to the next level?

I think the biggest thing, honestly, is more funding. Because with more funding, more people pay attention. Even at the healthcare executive level, they start to pay attention because hospitals like funding, and it gives them legitimacy. So I think that’s one of the biggest things. Our research is aimed at figuring out what the barriers are of evaluating gun violence and how to overcome them. I don’t have the answer yet. But we’re hoping to figure it out. How to overcome these barriers, which include the fact that many people in hospitals themselves don’t believe that this is a public health issue. So how do you bring everybody together in an apolitical way to tackle a health issue? That’s what we’re trying to figure out.

Have you noticed a significant shift toward recognizing gun violence as a public health crisis within the medical community?

It’s definitely gotten easier. But there’s still a lot of resistance. People’s views on this are very, very ingrained. And I think a big component is education, that this, again, is a health issue, that this is not about—I keep coming back to it—but this is not about the Second Amendment. And the more you educate, I think, the more we’re seeing that more and more people are joining us in this collective mission to make our community safer.