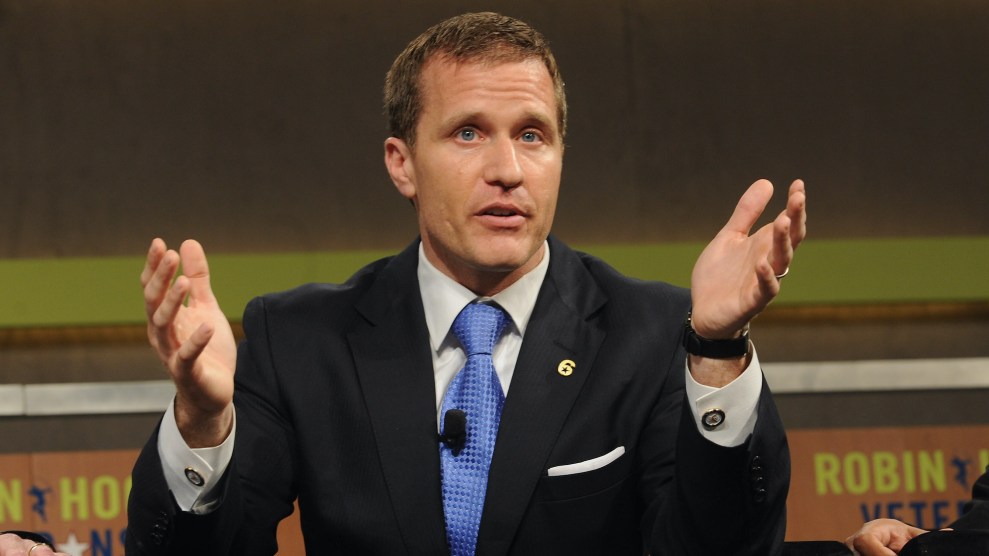 When Eric Greitens resigned from the Missouri governorship in 2018 amid allegations that he had sexually assaulted and blackmailed his former hairdresser, the embattled Republican, maintaining his innocence, told his supporters, “For those who would be moved to vengeance, let us allow history and God to bring justice.” Nearly three years later, history has failed to acquit him. But the disgraced former governor, who announced a 2022 Senate run to represent Missouri last week, is hoping he can convince his one-time constituents otherwise.

Greitens went on Fox News to break the story of his Senate candidacy. “I have been so encouraged by the people of Missouri that I am happy to announce tonight that I am running for the United States Senate to continue serving the people of Missouri,” he told host Bret Baier, promising to carry out “Trump’s ‘America First’ policies.” When Baier questioned why he would run after resigning amid sexual misconduct allegations, Greitens said he hoped “the truth continues to come out in this race,” blaming his woes on the media and a “George Soros–funded prosecutor.” Then Greitens delivered the crucial lie: “We’ve been exonerated,” he said, “and we’re moving forward.”

Here’s what actually happened: Greitens’ former hairdresser, who is identified as K.S. in court documents, testified to a legislative committee that in 2015, months before he started his campaign for governor, Greitens put his hand “all the way up” between her legs during an appointment without her consent. Two weeks later, she went to Greitens’ house at his urging. During an encounter in his basement, she told the committee, Greitens took a partially nude photo of her and threatened to release it if she went public about their relationship. When she broke down crying, he allegedly coerced her into oral sex. “It felt like consent, but, no, I didn’t want to do it,” K.S. recounted to the committee. “Coerced, maybe. I felt as though that would allow me to leave. That’s what he wanted.”

Days later, when K.S. told her now-ex husband about the encounter, he made a surreptitious recording of their conversation. (She also told two friends, who later corroborated her story.) Meanwhile, Greitens won the 2016 race for Missouri governor touting his background as a Navy SEAL and his hard-right political outsider status. In one campaign ad, he fired an assault rifle into empty field; in another, he shot a machine gun into a body of water. Within a year, the National Review was calling him a “rising star” of the GOP.

Then, in January 2018, a local news station ran an explosive report based on the recording made by K.S.’s ex-husband. (K.S., who did not comment on the record for that story, had pleaded with the reporter not to run it.) That day, Greitens confirmed his relationship with K.S., characterizing it as a past affair and calling it a “deeply personal mistake.” But he denied any violence or blackmail.

St. Louis Circuit Attorney Kim Gardner, known as a “progressive prosecutor” and criminal justice reformer, promptly opened an investigation into Greitens, and a grand jury soon indicted him for felony invasion of privacy related to the nude photo. Around the same time, the Missouri legislature launched dual investigations of Greitens—one based on K.S.’s story and the other for unrelated claims of campaign finance violations. (Gardner, working with then–Missouri Attorney General Josh Hawley, later charged Greitens with felony computer tampering based on the campaign finance claims.)

But the case soon got complicated. On the eve of Greitens’ invasion-of-privacy trial, Gardner’s team had yet to find the photograph at the heart of the case. Then a judge ruled that Gardner herself would have to testify about allegations of misconduct by a private investigator, William Tisaby, whom she had hired to interview K.S. and assist with the investigation. The questions about Tisaby’s conduct included whether he had taken notes or a recording of his interview with K.S.; during a deposition, he told Greitens’ lawyers that there were no notes and that the video recording equipment had malfunctioned, but Gardner’s office eventually produced a working tape that revealed him scribbling notes.

The investigative snafu implicated Gardner enough that she decided to drop the invasion-of-privacy charge against Greitens, saying she had “no adequate means of proceeding” with the case but that another prosecutor might refile charges. Greitens, at the time, declared victory. But two weeks later, still facing the prospect of impeachment by his former GOP allies, he agreed to a deal with Gardner’s office to resign in exchange for dismissing the other computer tampering case against him.

Greitens stepped down. The special prosecutor, Jean Peters Baker, never refiled charges based on K.S.’s story. She believed K.S., Baker explained in a press conference, but her team still couldn’t find the photo, and the statute of limitations was about to run out.

To recap: Greitens is accused of sexual assault and blackmail, and a recording of his victim speaking about the abuse is the basis for a local news investigation. A jury finds the evidence solid enough to indict him on related charges. An investigator flubs a deposition, and the prosecutor is forced to pull back. The criminal cases against Greitens may have gone away, but he was hardly “exonerated.”

Meanwhile, Gardner, the city’s first Black prosecutor, who was elected after promising to make the city’s criminal legal system more fair for defendants of color, has continued to suffer for her involvement in the cases against Greitens. In 2018, she reported to police that Greitens’ high-powered legal team had threatened her, saying, she recalled, her “career would be ruined and things would get difficult” if she proceeded with the prosecution. A year after her report, the police investigation was still lagging. (When a judge appointed a special prosecutor to look into it, he found that Greitens’ lawyers had made “aggressive” statements but nothing that rose to the level of a criminal threat.)

Greitens’ lawyers also accused Gardner of allowing Tisaby, a former FBI agent, to lie to them under oath. The police department investigated that allegation promptly. At the cops’ request, a court appointed another special prosecutor, who raided Gardner’s office and in 2019 charged Tisaby with evidence tampering and six counts of perjury. The indictment did not include charges against Gardner, but it implicated her, alleging Tisaby had lied about the notes and recording of the K.S. interview that Tisaby and Gardner had conducted together. These lies mattered, the indictment claimed, because they could “substantially affect” the “course or outcome” of the case against Greitens. While the indictment raised legitimate questions about whether Gardner’s team withheld evidence in the case against Greitens, whether that evidence could have affected the outcome of the case is deeply debatable: The Missouri legislative committee reviewed the unearthed recording of K.S.’s interview and took her testimony themselves, and concluded that her story was consistent between them.

Today, as Greitens launches his Senate campaign, Tisaby is still awaiting trial due to pandemic-related delays. The criminal case against Greitens for privacy invasion has never been heard by a court, nor have the blackmail or sexual assault claims. The closest the case has come to a resolution is the Republican-led legislative committee’s April 2018 finding that K.S.’s story was credible and corroborated.

Yet that’s not stopping Greitens from pretending he’s been found innocent of sexual misconduct. In his Fox News interview, Greitens falsely claimed that the Missouri Ethics Commission had found no evidence of any wrongdoing and “completely exonerated” him. In reality, the Ethics Commission hadn’t been looking at the sexual assault scandal at all. Its investigation involved totally separate campaign finance allegations; it fined his campaign $178,000 while concluding that Greitens had no personal knowledge of the wrongdoing.

It’s still unclear whether voters will buy Greitens’ act. According to Politico, Republicans are fretting about his run, calling him a “clear and present danger” to the GOP’s effort to retake the Senate. Even conservative radio host Hugh Hewitt is skeptical, comparing Greitens to former Missouri 2012 Senate candidate Todd Akin, who claimed people couldn’t get pregnant from “legitimate rape” and subsequently lost to Democrat Claire McCaskill.

Greiten is apparently ignoring their concerns. He spent the last two weeks talking up his loyalty to Trump, going on Newsmax and One America News Network, and bragging about being endorsed by Sebastian Gorka and Rudy Giuliani. “You’ve watched the way the mainstream media and the left have attacked President Trump for years because he was a conservative, he was an outsider,” Greitens told Hewitt in an interview last week. “They do the exact same thing to me.” There’s more than one way he takes after his idol.