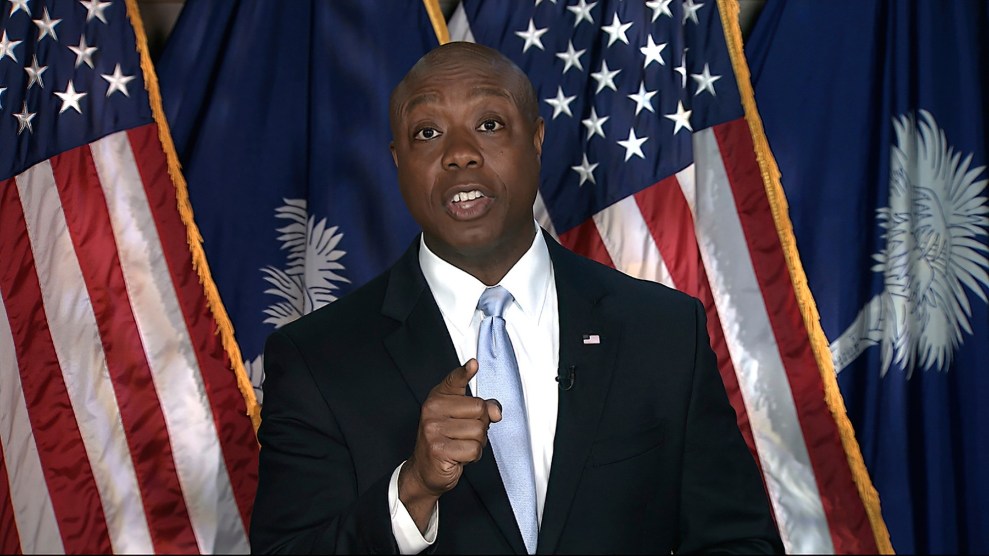 “America is not a racist country,” Sen. Tim Scott (R-S.C) boldly declared in his response to President Joe Biden’s Joint Address to Congress on Wednesday evening. If Biden jam packed lofty policy goals with proposals for ambitious government initiatives into his one-hour speech, Sen. Scott’s rebuttal offered a safe space for white conservatives who live in constant fear as they face the menacing specter of incremental progress in racial and social justice.

Choosing Sen. Scott was an obvious choice for a party constantly facing accusations of racism. The three-term South Carolinian is one of only eleven Black people ever to have served in the US Senate and he is the only Black Republican senator in the current Congress. But the historic nature of his position is impossible to disentangle from the fact that he represents today’s Republican Party. Of all the Black Republicans in Congress—there are two in the House—he was the one who was chosen for this prime- time spot because his mere presence could reassure the party’s base that they’re not racist, that all of their grievances about voting and diversity initiatives are legitimate, and the problems facing America are the fault of Black people and Democrats. And who better to send that message than a palatable Black figure?

Scott’s speech was billed as a hopeful response to Biden’s agenda. He turned the social programs Biden championed into government intrusion into the lives of self-sufficient Americans. He dusted off the tired, old Republican talking point of “tax and spend” Democrats. But the real intent was to provide a comforting security blanket for anyone refusing to face the harsh realities of race relations in the United States. His take on racism, division, and who’s-to-blamism was quintessential whitewashing—precisely what his white conservative audience was hungering for after Trump’s defeat last fall.

“I have experienced the pain of discrimination, to be pulled over for no reason, to be followed around a store for no reason. I get called Uncle Tom and the n-word by progressives, by liberals.”

Downplaying the threat of racism is a typical talking point for those who still consider themselves Republicans after all those years supporting their unapologetically racist former president Donald Trump. But a closer examination reveals that he was meant to deliver another popular Republican talking point: Democrats are the real racists. Before announcing the end of racism in a country that has barely begun to grapple with it, Scott described his personal experience with the everyday discrimination Black people face in this country. “I have experienced the pain of discrimination, to be pulled over for no reason, to be followed around a store for no reason,” he said. But that’s not enough for an audience desperate to hear that there is no racism. “I get called Uncle Tom and the n-word by progressives, by liberals,” he added. To drive home the point about who the real racists are in this country, he included a line about education. “Kids today are being taught that their skin color defines them, that if they look a certain way, they’re oppressors.” Scott said apparently referring to efforts to teach children the real history of America’s foundation. If you tease this out, his message was clear: Racism is only over for Black people. Racism against whites? Well, that’s just getting started.

The need to satisfy a base increasingly obsessed with the false notion that the real problem is discrimination is against white people, has only grown more personally urgent for Sen. Scott. As his party launches an all-out assault on voting rights, especially in Georgia, Scott has been tasked with assuring the GOP base that there’s absolutely nothing racist about Georgia’s new voting law that makes it much harder for Black people to vote. He defended the burgeoning voter suppression laws that Republicans all over the country have been introducing in state legislatures, and claimed Democrats’ proposal to expand voting rights across the country was the real problem. “This is not about civil rights,” he said about the proposed legislation. “It’s about rigging elections in the future.” Remember, please, Republicans are not the ones trying to rig elections and disenfranchise Black voters, Democrats are the guilty ones.

Another source of comfort to white conservatives is to frame anything one doesn’t like—like, say, police being held accountable for murdering Black people—or something that is uncomfortable—like the national conversations about race—as attempts to “divide” us. While President Biden implored Congress to work with him to protect democracy in the aftermath of the January 6 Capitol attack, Sen. Scott chose to soothe white fears about division by blaming Biden and the Democrats for the current state of affairs. When he lamented the “divisions” plaguing this country, he appeared to be operating in a universe only disaffected white conservatives and long-haul Trumpers can understand and applaud. “His actions are pulling us further and further apart,” Scott said of the new president. As evidence, he bemoaned the divisive nature of the country’s corrosive politics as the reasons for the alleged slow reopening of schools and churches, and the lack of bipartisan support in Congress for the $2 trillion COVID relief bill passed in March.

But the rest of us back here on planet Earth know that Trump upped the ante on attacking and demonizing his political opponents and refused to do anything meaningful to aid the economy and public health at the onset of the pandemic. Meanwhile, Republicans sat on their hands the second Biden was sworn in, and did nothing to support the relief bill that had broad support from the public. Unsurprisingly, while wringing his hands over our divisions, Sen. Scott seemed to have forgotten the January 6 insurrection at the Capitol. Biden and the Democrats were dividing the country, not the party that encouraged violence at the seat of government during the orderly counting of electoral votes, and then shrugged their collective shoulders when it was time to hold those in charge accountable. “The one person I don’t blame is President Trump,” Scott assured the nation in the days leading up to Trump’s second impeachment trial for incitement of insurrection.

Scott’s speech may have been chock full of GOP talking points, but there was an old favorite that wasn’t explicitly deployed but was obviously implied. In the aftermath of the Trump presidency, the coronavirus pandemic, and the racial justice protests that exploded across the country after the murder of George Floyd, America embarked on a fragile but badly needed racial reckoning. White conservatives needed someone to tell them that they weren’t racists resisting a changing world, but rather the progress on racial equality was something that was being inflicted on them. The GOP needed a Black friend. By laundering and displaying the party’s tired talking points, Sen. Scott served as just that. His speech gave white conservatives cover. After all, we all know that it’s impossible to be racist if you happen to have a Black friend.