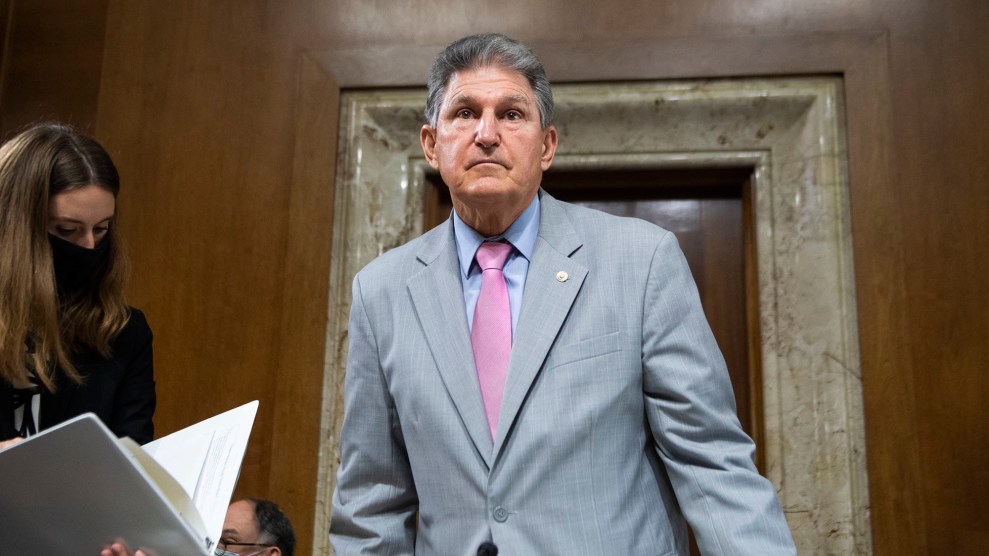 On Tuesday, the two most centrist members of the Senate Democratic caucus, Joe Manchin of West Virginia and Kyrsten Sinema of Arizona, issued a rare joint statement. Lamenting the “horrific” events of January 6th—when a right-wing mob incited by then-President Donald Trump stormed the Capitol to stop the certification of the electoral college vote—Manchin and Sinema begged their Republican colleagues to join them in supporting a bill to create a bipartisan commission to investigate what happened. The measure passed the House last week with substantial Republican support, but it faces uncertain prospects in the Senate because of the existence of the filibuster, the Senate rule that allows a 41-vote minority to block non-budgetary legislation from coming to a vote. Senate Minority Leader Mitch McConnell has already announced his opposition.

My statement with @SenatorSinema on the need for a bipartisan commission to investigate the events of January 6th: pic.twitter.com/MTJ0gEQjoL

It’s a notable document, as press releases go, not just because Manchin and Sinema are usually averse to calling out Senate Republicans writ large, but because they’re also the Democratic caucus’ most outspoken defenders of the filibuster itself. Manchin’s stance on the rule has wavered at times this year, but his most recent position is that it shouldn’t be changed. Sinema has said that the Senate should actually use the supermajority requirements more often. They have staked their reputations, in other words, on the ability to get things done in the Senate as it exists today. The January 6 commission threatens to give the lie to this approach—after all, if you can’t cobble together the votes for something as historically toothless as a bipartisan commission, what kind of hope can you have for anything else?

At the same time, they’re also offering Republicans a layup: If Republicans do vote to create a commission—which for decades has been a Washington cliche for doing practically nothing—they’ll give their Democratic allies a chance to argue that the Senate’s status quo actually works, at very little cost. That’s the subtext here.

But one thing’s for sure: the tension over the filibuster that’s been building for months (and years, in some circles) is coming to a head now. Democrats have gotten the early work of governance out of the way—a nearly $2 trillion stimulus and COVID relief package, various cabinet nominations, an impeachment trial, etc. Now the party’s big-ticket agenda items are starting to make their way through the House to the upper chamber, and there’s really no way most of them are going to get 60 votes.

Manchin, as a Democrat from West Virginia, has always been an outlier in his caucus. Sinema is a different story. As I reported in a recent profile of the Arizona senator, her evolution from progressive organizer to Washington centrist has dismayed her former allies, who have watched her cast votes against refugees and a living wage—issues that once formed a foundation for her politics. But she supports some of the legislation that would be doomed by a filibuster—such as the Equality Act, which extends federal civil rights protections to LGBTQ citizens.

And Democrats in her home state are starting to ramp up the pressure. Last weekend, the Arizona Democratic Party overwhelmingly passed a resolution calling on Sinema and her first-term Democratic colleague Mark Kelly to scrap the filibuster in order to pass these Democratic priorities. That came a few days after a few hundred activists held a rally in downtown Phoenix to protest the Senate rules. Their message has been a simple one, borne of past experience from a previous Democratic presidency: you can have a filibuster, or you can pass major legislation, but you can’t really do both. Sinema’s running out of time to prove them wrong.