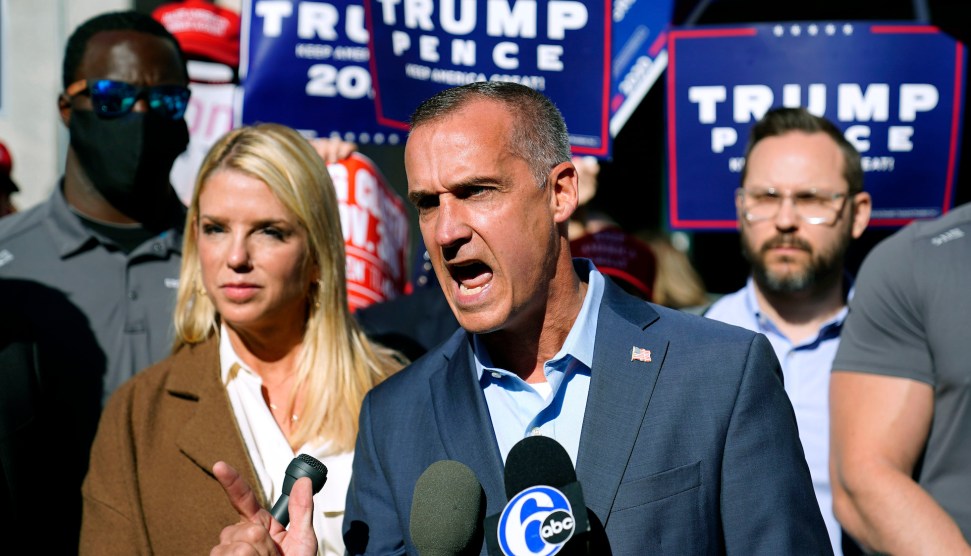 Windham, New Hampshire, has become the latest hotspot in Donald Trump’s ongoing crusade to prove his conspiracy theory that the 2020 election was stolen through rampant fraud. And the local Republican lawmaker pushing to turn an uncontroversial election audit there into a Big Lie battlefront has longstanding ties to Trump’s former campaign manager, Corey Lewandowski, who is also a resident of the town of 13,000.

For weeks, conservative media outlets have been relentlessly hyping a quixotic Republican-led audit in Arizona’s Maricopa County, where a firm called Cyber Ninjas has been hired to spearhead the effort and investigators are scouring for evidence of bamboo fibers in ballots in a bid to show that fraudulent votes originated in China. But recently MAGA tribunes, including the One America News Network and Gateway Pundit, have spotlighted Windham as the next domino to fall. Lewandowski has been aggressively promoting the audit in his hometown, and Steve Bannon has devoted significant time to it on his podcast. Last week, Trump himself weighed in with a statement congratulating “the great Patriots of Windham, New Hampshire for their incredible fight to seek out the truth on the massive Election Fraud which took place in New Hampshire and the 2020 Presidential Election.”

To be clear, the audit has nothing to do with the presidential election, but this minor detail has not seemed to deter Trump and his most ardent supporters.

Here’s what happened in Windham. After the votes were tallied last November, Republicans had swept all four of the town’s state legislature seats. The four Democrats who challenged them were shut out. The Democrat who came in fifth lost out on a seat by just 24 votes, close enough to call for a recount. The recount showed that the Democrat was credited with 99 more votes than she should have been, and the Republican candidates picked up a combined 300 votes—meaning the Republican victory was by an even wider margin. The town was unable to explain the discrepancy. In April, the state legislature passed a bipartisan bill ordering an audit to figure out what had happened.

Under the rules established by the legislature, Windham could appoint a representative to the three-member committee overseeing the audit. In April, the town’s board of selectmen, in a 3-to-1 vote, picked Mark Lindeman, a political scientist from an organization called Verified Voting. The lone vote against choosing Lindeman? That was cast by Lewandowski’s good friend Bruce Breton, the former chair of Windham’s Republican Party, who hoped to install a fellow named Jovan Pulitzer on the audit committee.

If that name sounds slightly familiar, that’s because Rudy Giuliani and Trump’s legal team trotted Pulitzer out as an expert witness during their effort to overturn the results of the presidential election. Pulitzer, a hero in MAGA circles, has no experience auditing elections. He is an inventor—his biggest claim to fame may be the CueCat, a device that scanned special codes in magazine advertisements and translated them into website URLs. He is also the author of dozens of books about treasure hunting (and one tome about outdoor survival in which he contemplates eating his dog). In the wake of the November election, Pulitzer recast himself as an authority on voter fraud and claimed he had developed a technology that can determine if a ballot is fraudulent by examining the folds in the paper. Arizona Republicans are currently relying on Pulitzer and his technology in their ongoing election audit.

Following Lindeman’s selection, Breton tried to force a reconsideration of the vote, rallying the MAGA faithful to his cause by appearing on nationally broadcast conservative media shows and inviting outraged conservatives to attend a board meeting last week where he made the case for Pulitzer. Lewandowski did his part with conservative media appearances complaining about the lack of press coverage of the Windham audit.

More than 500 people (many of them apparently not from Windham) showed up at the board meeting, transforming the typically sedate proceedings into a raucous MAGA-style event, complete with chants of “Stop the Steal.” Some attendees waved signs with Pulitzer’s name on them. Breton’s attempt to get Pulitzer on the audit committee flopped, but conservative media outlets have continued to spotlight the audit.

Lewandowski and Breton, who did not respond to a request for comment, are old friends. The pair are so close that, according to Breton, when he awoke from a coma in 2013 (he was undergoing cancer treatment at the time) Lewandowski was seated at his bedside. And they have worked together previously to stir up politics in Windham. In 2011, when Lewandowski was a political operative working for Americans for Prosperity (and moonlighting as a part time marine police officer), he tried to insert the Koch-backed group into town politics by producing a lengthy analysis of the town’s budget. Breton, who was on the board of selectmen at the time, championed the analysis and used it as a political cudgel in his sparring matches with other town officials. Lewandowski later ran to be the town’s elected treasurer—with Breton’s endorsement—and lost in a landslide.

In the case of Windham’s current vote audit, Breton is playing the familiar role of provocateur, and Lewandowski seems to be right in step with his old friend. The audit, which began on Wednesday, can be viewed live, and must be wrapped up by May 27.