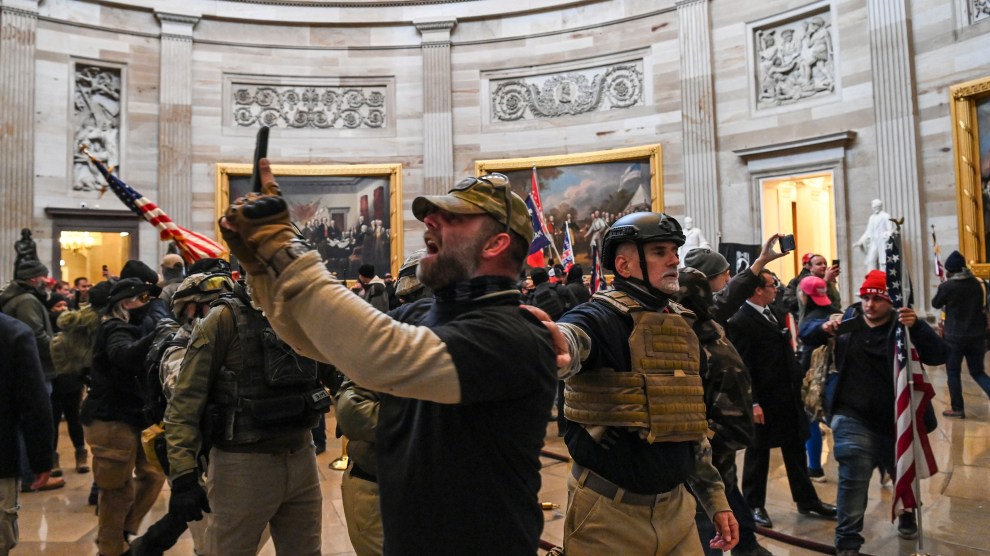 Federal prosecutors have broadened their January 6 conspiracy case against Oath Keepers, charging four additional members of the far-right militia group on Sunday in a plot allegedly involving at least 16 people to disrupt the certification of the 2020 presidential election. Federal agents also recently executed a search warrant targeting the group’s founder and seized his phone, an Oath Keepers attorney told Mother Jones on Tuesday.

The conspiracy case has deepened against a stark political backdrop: Just ahead of this past Memorial Day weekend, Senate Republicans blocked a bipartisan commission that would investigate what led to the January 6 insurrection, a historic assault on Congress in which throngs of belligerent Trump supporters viciously attacked police, ransacked the Capitol and threatened to kill lawmakers and Vice President Mike Pence. But even as Republican leaders impede further exposure of their party’s role in the “stolen election” lie that fueled the attack, the case against the Oath Keepers continues to reveal the influence of that incendiary rhetoric.

According to an indictment issued by the Justice Department on Sunday, during the week prior to the insurrection, various Oath Keepers held online meetings to plan the “DC op” for January 6. They used encrypted apps and private messaging on social media to discuss preparations for a QRF, or “quick reaction force,” that would be ready to launch an armed assault in the nation’s capital. “[W]e have a shitload of QRF on standby with an arsenal,” one defendant commented on December 31, responding to an offer from an unidentified individual to “coordinate help” from “friends not far from DC with a lot of weapons and ammo.”

“QRF will be our Law Enforcement members of Oathkeepers,” another defendant wrote on January 3, asking in a separate message the following day: “Where can we drop off weapons to the QRF team? I’d like to have the weapons secured prior to the Op tomorrow.”

The document details how Rhodes and others allegedly discussed using force on Trump’s behalf shortly after Trump was defeated in November.

The cadre of accused Oath Keepers connects in multiple ways to longtime Trump ally Roger Stone. At least eight people charged in the conspiracy acted as “security” for Stone at events in Washington, DC, on January 5 and 6, or did so previously at “stop the steal” events in Florida where Stone promoted Trump’s lies about election fraud, according to videos and other documentation.

One of the four men newly charged on Sunday, Paul Hackett, 51, whom the Washington Post identified as a Florida chiropractor, appeared in video footage from a December “stop the steal” rally in Miami, where he could be seen guarding Stone. Hackett was also among the Oath Keepers who attended a “gunfight-oriented” training session last fall at a shooting range in Leesburg, Florida. In video of that session, revealed in a recent Mother Jones report, an instructor tells Oath Keeper members to “drop” adversaries by shooting them in the heart, lungs, or head. The instructor, Andrew Smrecek, who describes himself online as a former Marine Corps rifleman, posted video and images from the training with hashtags that included “#stopantifa,” “#stopcommunism,” and “#giveviolenceachance.”

A few days after the training, Hackett and two other Oath Keepers who are now facing conspiracy charges traveled to Louisville, Kentucky, where they were among armed Oath Keepers who confronted Black Lives Matter protesters demonstrating over the fatal police shooting of Breonna Taylor.

Another person charged on Sunday in the conspiracy, 44-year-old Jason Dolan of Florida, was one of the Oath Keepers surrounding Stone during a pro-Trump rally outside the Supreme Court on January 5. (Stone denies involvement in or prior knowledge of the Capitol mayhem and has downplayed his ties to Oath Keepers.)

The latest indictment contains new information about Oath Keepers founder Stewart Rhodes that suggests prosecutors are building a case against him. The document details how Rhodes and others allegedly discussed using force on Trump’s behalf shortly after Trump was defeated in November, including during a video conference where Rhodes responded to the former president’s false claims about winning the vote. “We’re going to defend the president, the duly elected president, and we call on him to do what needs to be done to save our country. Because if you don’t guys, you’re going to be in a bloody, bloody civil war…you can call it an insurrection or you can call it a war or fight.”

Rhodes also told the group he was willing to “sacrifice” himself in a battle with antifa in Washington, DC, according to the indictment. “Let the fight start there. That will give President Trump what he needs, frankly…We want him to declare an insurrection, and to call us up as the militia.” (Those assertions by Rhodes further underscore the conclusion of top national security experts that Trump used stochastic terrorism to incite the far-right extremist movement.)

The indictment also says that Rhodes engaged in multiple communications with Oath Keepers on January 6, including calls he placed to two members outfitted in fatigues and tactical gear just minutes before they advanced through the crowd in a military-style formation known as a “stack,” and helped breach the Capitol Building. According to the indictment, Rhodes also communicated with an unknown number of Oath Keepers on January 6 through an encrypted group chat, and with an unnamed person Rhodes had appointed to lead the group’s efforts that day.

References to arming and mobilizing a “quick reaction force” amounted to Oath Keepers “being braggadocious, or just shit-talking,” says the group’s general counsel.

Rhodes is not named in the charging document but is identifiable as “PERSON ONE,” whom prosecutors describe as the leader of the Oath Keepers. Rhodes stated in March that he believes he may “go to jail” over the events of January 6, but he denies wrongdoing and has accused prosecutors of trying to build a false case against him and fellow Oath Keepers.

Federal agents seized Rhodes’ mobile phone in early May and returned it three weeks later, according to Kellye SoRelle, a Texas attorney who is general counsel for the Oath Keepers group. SoRelle told Mother Jones that FBI agents showed Rhodes a search warrant last month indicating they were seeking information on members charged with conspiracy. As to whether Rhodes will be charged, “he’s kind of in a limbo,” she said. SoRelle also said she was with Rhodes for most of the day on January 6; she maintains he did nothing illegal and argues that the conspiracy case is overblown.

The video conference Rhodes led after the election, according to SoRelle, was about using “legal means” to support Trump and “quash a rebellion” by antifa if Trump invoked the Insurrection Act. She said Rhodes had acted akin to an athletic coach “pumping up” a team before a game, and that various references to arming and mobilizing a “quick reaction force” amounted to Oath Keepers “being braggadocious, or just shit-talking.”

Two days before the assault on Congress, Rhodes posted comments on the Oath Keepers’ website encouraging members and affiliates to travel to the nation’s capital, according to prosecutors. “It is CRITICAL that all patriots who can be in DC get to DC to stand tall in support of President Trump’s fight to defeat the enemies foreign and domestic who are attempting a coup, through the massive vote fraud and related attacks on our Republic,” Rhodes said. He added: “As we have done on all recent DC Ops, we will also have well armed and equipped QRF teams on standby, outside DC, in the event of a worst case scenario, where the President calls us up as part of the militia to assist him inside DC.”