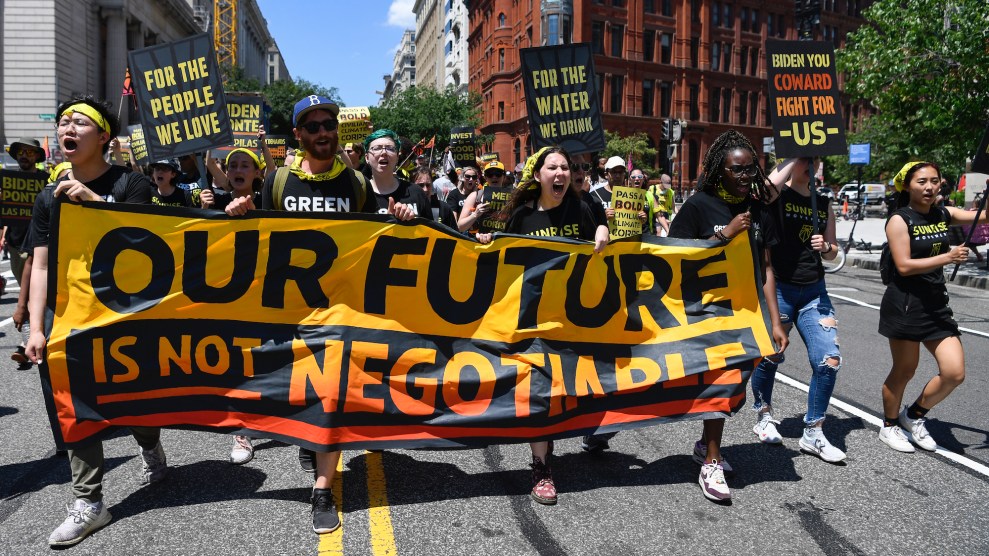 Youth activists with the Sunrise Movement march near the White House on June 28, 2021.Caroline Brehman/CQ Roll Call via AP Images

From a distance, they were a swarm of black and yellow—T-shirts, signs, and flat brim caps all fusing into an agitated squall near the White House on a steamy Friday morning in early June. More than 60 young activists wearing the uniform of the Sunrise Movement, a youth-led climate group, snaked their way around the building’s perimeter, chanting and hoisting signs to remind the president, “Our future is nonnegotiable.” Once the activists reached a gated entrance, they planted themselves, cross-legged, in a phalanx to block it. Secret Service agents milled about as the young activists risked arrest. A smaller group faced the street with a banner that proclaimed, in bold block letters: “Biden: No Compromises, No Excuses.”

That June 4 demonstration was the first major climate protest of Biden’s presidency. The president had promised to wrap up his negotiations with GOP lawmakers over his jobs and infrastructure proposal by Memorial Day, but four days later, they dragged on. The deal would perhaps be Democrats’ only chance to get climate protections on the books during Biden’s presidency, and to the activists, the likelihood of that dimmed as the White House continued to seek common ground with a party largely opposed to climate measures. “We have such a short window of time to deliver something,” Lauren Maunus, Sunrise’s advocacy director, told me that day. “You need to actually deliver on your commitment.”

Soon a swath of Democratic senators began to echo Maunus’ concerns. Sen. Martin Heinrich (D-N.M.) tweeted on June 9 that Biden “should not count on every Democratic vote” if the deal lacked ambitious climate measures. That same day, Sen. Michael Bennet (D-Colo.) predicted that “the only infrastructure bill we can pass out of the Senate” needed massive climate investments. Sen. Ed Markey (D-Mass.), who co-authored the Green New Deal with Rep. Alexandria Ocasio-Cortez (D-N.Y.), presented an even blunter proposition: “No climate, no deal,” he tweeted.

Climate activists embraced that pithy ultimatum, and a number of Markey’s Democratic colleagues, both progressive and moderate, have thrown down matching threats. They’re demanding that the bipartisan infrastructure package, a $579 billion deal the White House and Republican senators agreed to late last month, must pass alongside a second bill with stronger climate measures through budget reconciliation, which bypasses the Senate’s filibuster and would only require Democratic votes. The “no climate, no deal” tracker—a joint venture between the Sunrise Movement and Evergreen Action, a climate-focused think tank—has identified 14 Democratic senators who support that pledge, as of last Friday. In the last few days, Senate Majority Leader Chuck Schumer (D-N.Y.) and Sen. Patty Murray (D-Wash.) have expressed their support for that position as well.

But for all their purported audacity, these Democrats have been less clear about what exactly they need to see in the deal. Mother Jones asked all the Democrats listed on the tracker what specific climate-related measures that they’d be willing to hold an infrastructure deal hostage over, and only two shared their lines in the sand. Schumer told reporters on Friday that he will oppose allowing gas to count as clean fuel under a clean electricity standard. (Such a standard was the backbone of Biden’s initial infrastructure proposal, but was scant on the precise details. White House officials have pushed for Democratic lawmakers to take it up in the reconciliation bill.)

A spokesperson for Sen. Ron Wyden (D-Ore.), meanwhile, said any infrastructure deal he agrees to must include tax credits for electric vehicles and his Clean Energy for America Act. That bill, which passed out of the Senate Finance Committee with unanimous Democratic support earlier this year, would provide both long-term tax credits for clean energy production while ending fossil fuel subsidies.

Eight of the senators declined to share any specific red lines and instead highlighted the priorities they’d like to see their colleagues consider. A spokesperson for Sen. Alex Padilla (D-Calif.), for example, says he’s focused on a path to 100 percent clean power by 2035 and ensuring 40 percent of the overall investment benefits communities that bear the brunt of pollution and the impact of climate change. Sen. Elizabeth Warren (D-Mass.) is also pushing for clean energy initiatives, as well as her bills to incentivize major investments in green manufacturing and transportation. Sen. Brian Schatz (D-Hawaii), one of the Senate’s leading climate hawks, raised concerns about the amount of money his colleagues might be willing to devote to climate priorities. “It really does matter how much you do of each of these things,” Schatz tells me. “Now is not the time for a pilot project.”

So far, each of the “no climate, no deal” senators has their own set of priorities, with no coherent marker of what would constitute a breaking point—or force them to reject the bipartisan infrastructure package if it doesn’t meet certain climate criteria. Some of that is a matter of timing. The Senate returned from a two-week hiatus on Monday, the unofficial kickoff of the reconciliation negotiations. “It’s a little too early to say, with great specificity, what’s going to be in the reconciliation package on climate,” Schatz tells me. A spokesperson for Sen. Bernie Sanders (I-Vt.), who oversees the reconciliation bill as chair of the Senate Budget Committee, tells me there weren’t any priorities to share at the moment, promising an update as senators returned to Washington this week.

Markey—who owes his recent reelection, in no small part, to climate groups like the Sunrise Movement—is taking the lead on identifying must-have climate measures, according to sources familiar with the negotiations. Possibilities include a version of the clean electricity standard, ending fossil fuel subsidies, and the promise to spend 40 percent of federal climate-designated funds on environmental justice-related projects, according to sources familiar with the negotiations. (In a statement, Markey called for a budget reconciliation package that includes “massive investments for climate finance, for equity, for green jobs, and for other proposals that can combine to achieve our climate goals, including a Civilian Climate Corps,” and promised to fight for a clean electricity standard. “There is no one way to do it,” he added, “but we have to do it.”)

Part of the lingering fuzziness is due to the timing of Biden’s negotiations with Republicans. “No climate, no deal” became a rallying cry in mid-June, but it wasn’t until a few weeks later that Biden announced his deal. While some things made their way into the $579 billion package—including funding for public transport, electric vehicle charging stations, and a promise to replace all of America’s lead pipes—it disappointed climate activists like Evan Weber, the Sunrise Movement’s political director, who described the measures as “scraps” compared to what Biden called for in his initial $2.3 trillion proposal.

The compromise inspired yet another Sunrise Movement protest, which accused Biden of being a “coward” for agreeing to a deal that did little to combat what Biden himself had called an “existential threat.” This time, hundreds of demonstrators showed up—as did progressive members of Congress, including Ocasio-Cortez and Rep. Jamaal Bowman (D-N.Y.). The White House has tacitly recognized these critiques. Days after the deal with Republicans was reached, White House adviser Anita Dunn and climate czar Gina McCarthy authored a June 29 memo urging Congress to attach a bevy of climate measures to any reconciliation deal. Biden reiterated his call for a clean electricity standard in a speech last Thursday.

The biggest point of leverage the “no climate, no deal” senators have is the party’s one-vote majority in the Senate, allowing any individual senator to tank a bill for not being progressive enough. But that cuts both ways: several moderate Democrats have rejected too high a price tag for reconciliation. And so far this year it’s been the moderates who have been more willing to watch a Biden priority crash, while progressives have tended to accommodate to ensure that at least some version of a bill passes.

Schatz hopes his colleagues find cohesion and cautioned them to remain “intensely flexible” as they head into negotiations. “This is not about whether one legislator or the other gets to enact her or his longtime project,” he tells me gravely. “This is about the fact that the planet is on fire, and the most powerful country in the world is about to do something about it.”