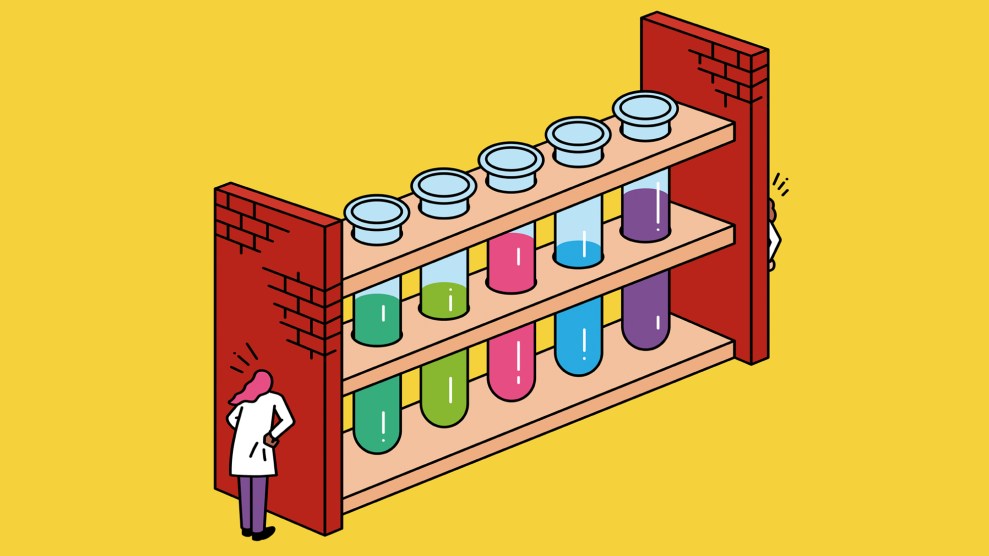 The coronavirus is a rapidly developing news story, so some of the content in this article might be out of date. Check out our most recent coverage of the coronavirus crisis, and subscribe to the Mother Jones Daily newsletter.
Since the arrival of COVID-19, our lives have shifted in ways big and small. Most likely, the pandemic will not end with a bang—we’ll be dealing with some version of it for years to come. As we slowly adapt to our new normal, we’ll embrace some changes and resent others. A few of us at Mother Jones wrote about some of the shifts we’ve noticed in our personal lives and the world around us—from the “love it” to the “leave it” to the we’re-still-figuring-it-out. Read the rest of the essays here.

In early January 2020, weeks before the World Health Organization officially uttered the word “pandemic,” the Shanghai Public Health Clinical Center, a hospital associated with Fudan University, received a sample of a mysterious virus that had sparked a cluster of pneumonia cases more than 400 miles away, in Wuhan. Professor Zhang Yongzhen, a virologist who had sequenced genomes from thousands of new mRNA viruses over the course of his career, quickly got work on this one.

Zhang completed the sequence in under two days, as he recalled in an interview with Time last summer, and submitted his results to a database run by the United States National Institutes of Health for review. But fearing it would take too long for the data to reach people who needed it, Zhang and his team decided to go straight to the public: On January 11, they posted the sequence on the open-access site virological.org.

The day Zhang and his team posted the new coronavirus sequence on an open-access site “was the most important day in the COVID-19 outbreak.”

“That was the most important day in the COVID-19 outbreak,” Linfa Wang, a virologist at Duke-National University of Singapore Medical School, told Nature in December. Thanks to Zhang, the world had a head start on COVID. Even as the virus, which we now know as SARS-CoV-2, began to spread globally, researchers everywhere had already started using Zhang’s sequence to study it, design diagnostic tests, and develop a vaccine. If you’re one of the hundreds of millions of Americans who’ve received a dose of the COVID shot so far, you have Zhang in part to thank for it.

Luckily, Zhang wasn’t alone in recognizing the value of accessible science during this pandemic. Many academic publishers, including big names like Elsevier, Springer Nature, and SAGE lifted their paywalls, which can be pricey, for most COVID-related content. And to meet demand, journals’ speed of peer-review dramatically increased. Meanwhile, new research increasingly published on preprint servers ahead of peer-review and scientists created organic task forces to analyze them. It was like some kind of weird make-believe world where science happened quickly and collaboratively, and research articles were shared on the house. (The system, however, was still not immune to mistakes.) “The pandemic has shown us all in real-time the value and vital importance and role of open science,” Steven Inchcoombe, the chief publishing and solutions officer at Springer Nature, told me in an email, “not just within academia, but for everyone.”

Now, after more than a year derailed by the virus, the case for keeping science open-access—that is, free to readers—couldn’t be any stronger. “If you believe that science matters to solving COVID, then you have to believe that any delays in communicating science would have slowed it down,” says Michael Eisen, editor-in-chief of the journal eLife, a professor of genetics, genomics and development at UC Berkeley, and a co-founder of Public Library of Science (PLOS). Plus, COVID isn’t the only global crisis our planet is facing. What about climate change or cancer or malaria or biodiversity loss or bee colony collapse disorder or coral bleaching? Wouldn’t we benefit from those research articles being freely accessible?

Indeed, advocates have been making this argument for decades, most famously, open-access activist Aaron Swartz, who in 2013 took his life after being arrested for illegally downloading millions of journal articles that he planned to post online. Since then, the calls to free science have grown louder as more researchers acknowledge that the science publishing system makes little sense.

Typically, it works like this: Scientists apply for and are awarded funding, conduct science, and write papers. Then, when they’re ready to publish a paper, they send it to journals one at a time, hoping the most prestigious one will pick it up. Once a journal accepts the paper, it can charge whatever it wants for people to access it. Researchers aren’t paid for their articles—and are expected to review their colleagues’ papers for free as just like, part of the gig of being a scientist. For institutions that rely on research, like universities, access to bundles of journals can cost millions of dollars, even for schools whose own scholars produced some of the work. (It’s sort of like if Mother Jones didn’t pay reporters for their stories, yet charged hundreds of dollars for a subscription.)

It’s sort of like if Mother Jones didn’t pay reporters for their stories, yet charged hundreds of dollars for a subscription.

The system makes even less sense when you remember that it is often the government—that is, the public—that is funding the research in the first place through federal grants. The other, more obvious problem with this system is that it hinders the cross-pollination of ideas, collaboration, and progress. The data backs me up: According to an analysis by Springer Nature, open-access articles see, on average, four times more downloads, nearly two times more mentions in the media, and 1.6 times more citations—a good indicator of scientific impact—than pay-to-read articles.

It’d be foolish to think all of the industry’s changes will remain after the pandemic. Journals have bills to pay, after all. But from a public opinion perspective, it may be hard for publishers to “put that genie back in the bottle,” says Jeff MacKie-Mason, the university librarian and an economics professor at UC-Berkeley. MacKie-Mason, in fact, has been pushing for more accessible science for the UC system for years as a co-chair of its publisher negotiating team. Back in 2019, UC shook the academic world when it canceled its contract with Elsevier after failing to reach an agreement that would allow free access to the universities’ own research. For two years—including the bulk of this pandemic—the UC staff scraped by. Professors rationed their research needs. They borrowed material through the library system, sourced articles from their peers directly, and relied on preprints. It wasn’t a perfect process and was definitely not sustainable, but it was effective. Just this past March, the UC system got its way and signed a new open-access agreement with Elsevier. According to the university, it is the largest such agreement to date in North America.

The pandemic likely strengthened the universities’ case. “If science is worth anything,” says MacKie-Mason, “the more people who can access it, the better we are,” he says. “The pandemic has proven it.”

Most people I spoke to for this story agreed open access is a win for science. But no one could give me a clear answer about how to actually achieve it. Should the federal government mandate that research it funds be published in open access journals—as many countries in Europe are aiming to do? Should universities foot the bill? Individual researchers? There are a handful of open-access publishers already, like PLOS and the UK’s BioMed Central—but they’re not exactly free. Most open-access journals operate by charging researchers or institutions a fee typically ranging from a few hundred bucks to thousands of dollars to ensure their research is publicly available.

“If we value these things, someone’s going to pay.”

“If we value these things, someone’s going to pay,” says Theodora Bloom, executive editor of The BMJ, a medical journal based in the UK, and a co-founder of preprint server medRxiv. “How do we get to a point where the work is done and paid for, and the results made freely available as soon as possible to as many people? I don’t think we yet know what the right model is.”

Ready or not, there is evidence the science world is already changing. Publishers who designed the paywalls are now vying to lead the open access race. (Inchcoombe told me that since 2015, Springer Nature has published “more [open access] articles than any other publisher,” while Elsevier told me in a statement that it is “the fastest-growing open-access publisher in the world.”) Meanwhile, their competition—journals that are strictly open-access—have skyrocketed in number over the past decade. And universities, like the UC system, are pursuing new, large-scale open-access agreements, including Iowa State, Carnegie Mellon, and the Big Ten, to ensure their research is freely available. “It’s a really rapid movement,” MacKie-Mason says. “There’s been more change in open access publishing in the last five years, I think it’s fair to say, than in the previous 25 years.” I say, let’s keep the momentum going.