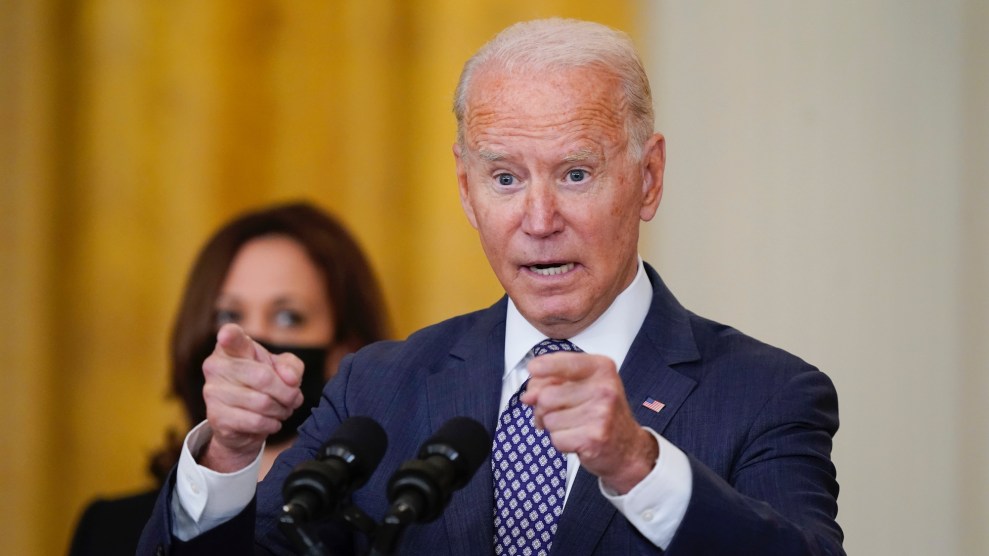 Amid images of a chaotic exit from Afghanistan—including one of an infant being passed to armed soldiers over barbed wire—President Joe Biden addressed the nation Friday about the inglorious end to America’s longest war. He projected calm as he made a claim also made by every US president since George W. Bush launched the conflict in 2001: things were starting to turn around. “Since I spoke to you on Monday, we’ve made significant progress” in executing the evacuation, Biden declared.

“Let me be clear: Any American who wants to come home, we will get you home,” he said, adding that the United States would everything that we can to provide safe evacuation for our Afghan allies, partners, and Afghans who might be targeted because of their association to the United States.” And he expressed pain at the scenes of misery from the ground in Kabul. “What Afghan people overall, but including Afghan particularly women and girls, [have endured] the past week has been heartbreaking. We’ve seen gut-wrenching images of panic, people acting out of sheer desperation.”

But he did not raise the US commitment to accept Afghan refugees—and in particular, Afghan women—in the United States, beyond those directly associated with the US effort. As my colleague Madison Pauly noted Tuesday, “Rhetoric around women’s rights in Afghanistan, and portrayals of US military forces as saviors of Afghan women, have been used to justify the US war there from the beginning.” Yet, she added, “US assistance for at-risk Afghan nationals, including journalists and women’s rights activists, is severely limited.” So far, calls to offer them visas have not been heeded.

The president also brushed off a report from The Wall Street Journal, published late Thursday afternoon, about a classified State Department cable sent to the White House in July that warned of the “potential collapse of Kabul soon after the U.S.’s Aug. 31 troop withdrawal deadline in Afghanistan.” Previously, Biden had publicly insisted that the Afghan government could hold off the Taliban. After Biden’s remarks, a reporter asked why, if he had been warned of the possibility of a rapid Taliban takeover, US forces hadn’t prepared better for the evacuation.

“We get all kinds of cables, all kinds of advice,” Biden said. Some advice warned of a rapid fall of the Afghan government, he said, while others projected “they’d be able to sustain themselves through the end of the year.” But the “consensus opinion was that in fact, [the collapse] would not occur until later in the year.” He added: “I made the decision [to pull out]—the buck stops with me.”