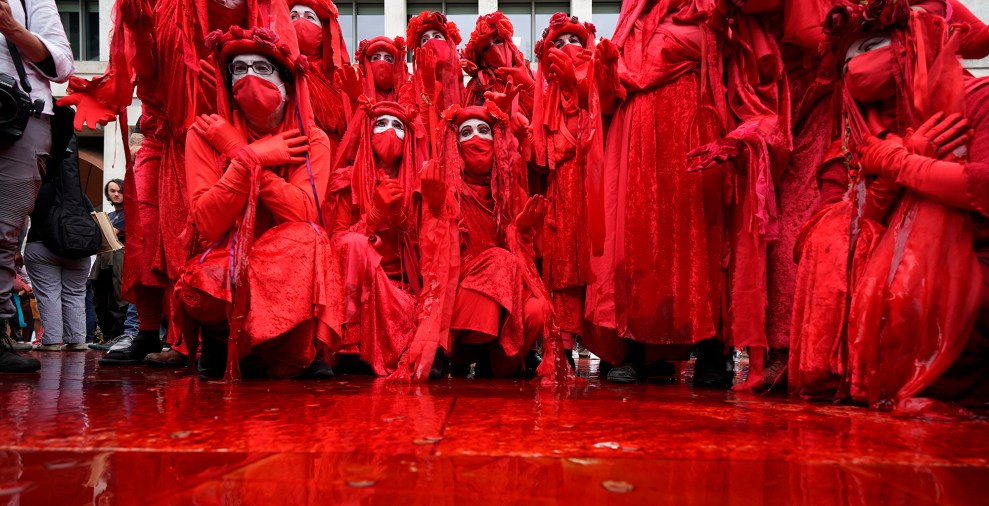 Extinction Rebellion protesters poured red paint over the entrances of city institutions as they marched through London’s financial district in a protest against the ‘“blood money” on which they say the UK economy is built.

In what appeared to be the biggest mobilization so far this week by the environmental protest group, several thousand demonstrators took a tour of the city, stopping off at the banks and law firms they saw as most culpable in the climate crisis.

All week, groups based on local areas, or around issues such as gender, race or politics, have staged actions in different locations in central London. On Friday, the protest was staged in solidarity with black, brown and indigenous people, especially in the developing world.

After rallying outside the Bank of England, protesters marched to Standard Chartered bank, where activists scaled the entrance and poured blood-red paint across its glass facade, to highlight the $31.4 billion they say it had invested in fossil fuels since the Paris climate accords.

Activists then went to the Guildhall, from where the financial district is governed, and sprayed the building with red paint. At 3 pm, they reached Paternoster Square, where the London Stock Exchange is located, for rallies and a speech. A mass civil disobedience was planned. “Today’s protest is highlighting that racial, social and climate justice are all intertwined,” said Bhavini Patel, from east London, an activist with XR Unify. “There is no separation and we recognize that, because where’s that profit going and how does it impact us?”

“Profit extraction has meant that there has been racial inequality, social inequality and climate collapse. It’s interlinked, and if we want justice we need to be demanding justice for all three things, so that we are equal as people.”

Friday was the fifth day of XR’s fourth London “rebellion,” the term it uses for the two-week carnival of protest and civil disobedience that has become one of its trademark strategies. Demonstrators had already carried out street blockades in Covent Garden, Whitehall, the West End and Oxford Circus. On Thursday, animal rights activists stained the fountains outside Buckingham Palace red.

The group’s strategy has been different this year. Whereas in previous rebellions, activists had sought to take and hold key sites in the capital, this time they have staged pop-up occupations, targeting high-footfall sites in the hope of engaging as many people as possible in “crisis talks” about the state of the environment, and what to do about it.

Friday’s protest marked an inflection point, with XR using the following week to specifically target the City and financial institutions that are funding fossil fuels, and to drive home its key demand: stop all financing of fossil fuels projects immediately.

“We knew it was going to be more difficult to hold major sites, we haven’t been able to do that for a while.”

“We knew it was going to be more difficult to hold major sites, we haven’t been able to do that for a while, so for us moving around and being agile and adaptable has felt really important,” Alannah Byrne, of XR’s media team, said. “It also means we can tell more of a story and target different places and highlight the issues in more places.”

The Metropolitan police’s tactics have also changed. Initially, police tried to block access to protests, but it soon became clear officers were causing more of a disruption than they were preventing. Instead, they moved to attempting to cordon off and isolate XR’s protest structures, and the activists locked on to them.

Lock-ons have been at the core of XR’s strategy since it began, but locked-on activists need support from other activists, to bring them food and drink, shelter them from the elements, keep them company, and sometimes to surreptitiously swap places.

Once protest apparatuses have been secured, police have imposed section 14 orders to place restrictions on the protests and demand participants leave. Despite that more aggressive approach to trying to nip XR’s actions in the bud, there have been fewer arrests this year, with only 189 as of Thursday afternoon, according to the Met.

Whether that was due to a change in police tactics was uncertain. Gail Bradbrook, one of XR’s founders, said: “I think it’s to do with the numbers in XR at the minute who are willing and able to be arrested—pre-Covid, there were probably higher numbers,” she said.

Richard Ecclestone, a former police inspector with Devon and Cornwall police who acts as XR’s police liaison, said he felt the Met gold commander’s promise to the group of a “safety-first” policing approach had been broken in the rush to suppress occupations.

He cited examples where police rushing to control areas had reportedly pulled apart women who were glued together or risked toppling a ladder being scaled by activists. In another case, he said, a locked-on protester surrounded by police had to be taken to hospital suffering from dehydration after officers failed to give them drinks.