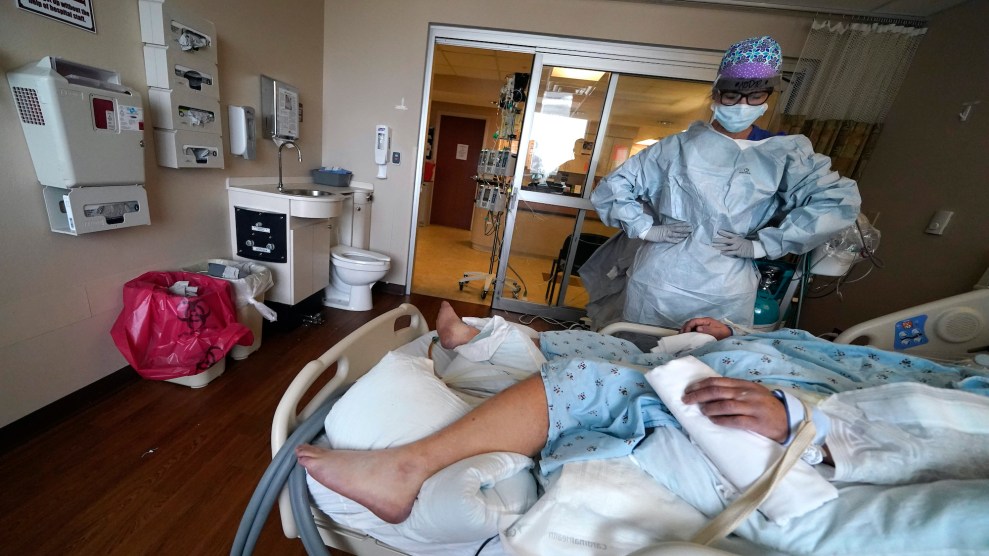 Jodie Ford, an ICU nurse, tends to a COVID-19 patient at the Willis-Knighton Medical Center in Shreveport, Louisiana.Gerald Herbert/AP

As powerful Hurricane Ida bore down on Louisiana on Sunday, bringing 150 mph winds, a large storm surge, and the threat of up to two feet of rain, hospitals across the state were filled to the brink with COVID patients, including hundreds that require ventilators and intensive care.

“We don’t have any place to bring those patients. Not in state, not out of state,” Gov. John Bel Edwards told the Associated Press.

Like its neighboring Gulf states, Louisiana is in the midst of a severe fourth wave of COVID infections, reaching as many as 7,500 new cases each day in mid-August, according to the CDC. The extra-transmissible Delta variant and Louisiana’s low vaccination rate have slammed hospitals with thousands of patients—more than in previous waves—prompting medical facilities to stop accepting patient transfers and Gov. John Bel Edwards to warn of a “major failure of our healthcare delivery system,” according to Business Insider.

The pace of new cases has slowed in the last two weeks, giving the state some leeway as the storm bears down. But as of Sunday, Louisiana was reporting that nearly 500 COVID patients remained on ventilators and 84 percent of ICU beds were full. “The evacuation of our hospitals is not an option,” Bel Edwards said at a press conference on Friday. Some patients with acute needs have been transferred from more rural hospitals to larger ones. But on the whole, patients and medical systems will simply have to weather the storm.

Emergency rooms will stay open, but many clinics and urgent care centers have closed.

Ochsner Health, the largest hospital system in the state, considered evacuating coastal hospitals but was unable to do so due to crowding at its other facilities, according to the Associated Press. Administrators said they were prepared with backup generator power and days of extra medical supplies and food. According to New Orleans Public Radio station WWNO, in the lead-up to the storm, hospitals across the state were discharging patients as quickly as possible and reducing staff. Emergency rooms will stay open, but many clinics and urgent care centers have closed.

Hospitals in nearby Gulf states also affected by Ida aren’t in much better shape. Both Mississippi and Alabama are at record-high ICU usage, according to the Montgomery Advertiser. “We’ve got a hurricane season coming, we’ve got a pandemic,” said Mike Evans, director of the Mobile County Emergency Management Agency in coastal Alabama. “How many more things can you pile on top of folks?”

Like Hurricane Katrina, which struck Louisiana’s coast 16 years ago to the day, Ida is likely to have the greatest impact on low-income communities of color. A few weeks after that devastating storm, then Gov. Kathleen Blanco announced that Charity Hospital—a New Orleans public institution since the mid-1700s, would be closed permanently. “Before Katrina, it was a lifeline for the city’s uninsured,” Gary Rivlin, a Mother Jones contributor and author of Katrina: After the Flood, wrote last year in the Appeal:

Working with the military just after the storm, hospital staff scrubbed clean the first three floors of the 20-story hospital and prepared to reopen it. Yet medical staff was thwarted not by mold but the state agency overseeing Charity, which several times chased out the doctors, nurses, and other personnel, and ultimately padlocked the building. The state, which was responsible for picking up Charity’s budget, had long wanted the hospital closed, as did others who saw in Katrina an opportunity to chase out the poor.