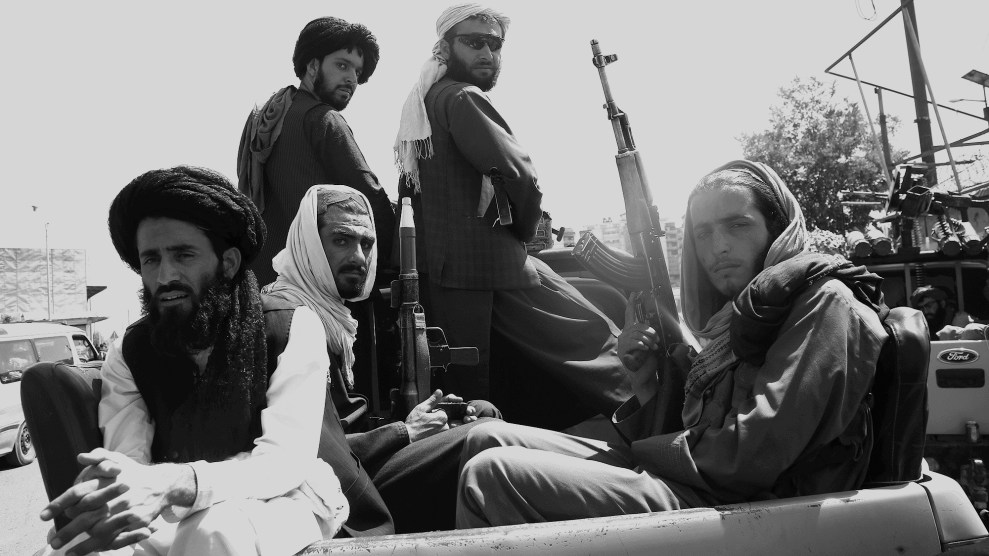 Taliban fighters are seen on the back of a vehicle in Kabul, Afghanistan after seizing control of the city.AP

Editor’s note: This must-read essay from David Corn appears in his new newsletter, This Land. We’re still piloting the project, but given the gravity of what’s happening in Afghanistan and David’s spot-on analysis, we wanted to make sure as many readers as possible have a chance to read it. This Land is a new paid newsletter written by David three times a week to get behind-the-scenes updates and his unvarnished take on the stories of the day, and more, and subscribing costs just $5 a month—but we’re giving everyone a sneak peek today for this important story. (You can sign up for a free 30-day trial of This Land to get more from David here.)

The Taliban takeover in Afghanistan and the calamitous collapse of Kabul are the result of years of American failure to understand that nation and that war—an immense failure that was covered up by the administrations of George W. Bush, Barack Obama, and Donald Trump.

It was Bush and Dick Cheney who led the United States into what would be the longest-running quagmire in American history. And they did so with little strategic thought about what to do after chasing Osama bin Laden out of Afghanistan and running the al-Qaeda-friendly Taliban out of power. Most notoriously, before figuring out how to proceed in Afghanistan after the initial attack, they launched the even more misguided war in Iraq on the basis of lies and, in similar fashion, without a clear plan for what would come after the fall of Saddam Hussein. As a result, over 4,400 American soldiers would perish there, and hundreds of thousands of Iraqi civilians would die in the years of post-invasion fighting. Meanwhile, nearly 6,300 American GIs and contractors would lose their lives in Afghanistan. The arrogance and ineptitude of Bush, Cheney, and their henchmen have led to the horrible images and tales we have seen reported from Afghanistan in the past few days—which themselves are the continuation of many years of horrible images and tales from the double-debacle of these two wars.

But the Obama and Trump administrations were complicit in the Afghanistan catastrophe, particularly for perpetuating the national security establishment’s delusions—and lies—about the war. In 2019, the Washington Post obtained access to a trove of confidential US government documents about the Afghanistan war that were produced as part of an inspector general’s project that investigated the root failures of the war by conducting interviews with 400 insiders involved with the effort, including generals, White House officials, diplomats, and Afghan officials. The findings were damning. As the Post put it, “senior U.S. officials failed to tell the truth about the war in Afghanistan throughout the 18-year campaign, making rosy pronouncements they knew to be false and hiding unmistakable evidence the war had become unwinnable.”

That was a helluva secret to keep from the public. A sharp indictment came from Douglas Lute, a three-star Army general who was the White House Afghan war czar for Bush and Obama. In 2015, he told the project’s interviewers, “We were devoid of a fundamental understanding of Afghanistan­—we didn’t know what we were doing.” The guy in charge of Afghanistan remarkably added, “We didn’t have the foggiest notion of what we were undertaking.” Lute also observed, “If the American people knew the magnitude of this dysfunction.” Yes, imagine if we did—though the vast corruption that undermined the massive US rebuilding endeavor was well reported repeatedly over the years. As were the continuous failures within the war itself. Yet Congress, the media, and the citizenry paid insufficient attention to this never-ending, going-nowhere conflict.

Several officials interviewed noted the US government—military HQ in Kabul and the White House—consistently hoodwinked the public to make it seem the US was winning in Afghanistan when it was not. Remember the steady stream of assurances the Afghan military was becoming more capable of beating back the Taliban? That was BS. A senior National Security Council official said there was pressure from the Obama White House and the Pentagon to concoct stats showing the American troop surge was succeeding: “It was impossible to create good metrics. We tried using troop numbers trained, violence levels, control of territory, and none of it painted an accurate picture. The metrics were always manipulated for the duration of the war.”

John Sopko, who headed the office of the Special Inspector General for Afghanistan Reconstruction (SIGAR), which ran the project, bottom-lined this for the Post: “The American people have constantly been lied to.”

Think about that. Americans have paid about $1 trillion for the war in Afghanistan. Thousands have given their lives; many more have suffered tremendous injuries. And the public was not told the truth about this venture. It was bamboozled by successive administrations. The Post had to twice sue SIGAR to force the release of these papers under the Freedom of Information Act. The Trump administration preferred to keep this material under wraps.

Want to get more like this from David Corn? Sign up for a free 30-day trial of his new newsletter, This Land, today and see why paying $5 a month for his no-holds-barred analysis, sent to you three times a week, is too good of a deal to pass up.

These documents were somewhat akin to the Pentagon Papers, the 7,000-page long history of the Vietnam War that was leaked to the media by Daniel Ellsberg in 1971 and showed that the Kennedy and Johnson administrations had routinely deceived the public about supposed progress in that war. (The Afghanistan papers, unlike the Vietnam study, were not classified.) Yet the Post’s big get did not detonate a major controversy, as the Pentagon Papers did. This holy-shit scoop was duly noted, and then, as is often the case, we all moved on. The Afghanistan war had long since become a non-story, relegated to p. A15, if covered at all.

Now we are worried, perhaps angered, by the fall of Kabul, and we fear for the Afghans—especially the women and girls, the human rights activists, and those who aided US forces and Western journalists—who are about to become inhabitants of the Taliban’s fundamentalist hellscape. But however we reached this point—and whether or not President Joe Biden committed a grave error with the US troop withdrawal and its management—one thing is clear: US presidents, military officials, and policymakers were not straight with the American public about Afghanistan. We never had an honest debate about what was being done there and what could—and couldn’t—be accomplished. (For a snapshot of the absurdity of the Afghanistan war, see this recent thread from Sen. Chris Murphy, a Connecticut Democrat.)

As Afghans in Kabul, including President Ashraf Ghani, fled the incoming Taliban this past weekend, the blame game kicked in. Who lost Afghanistan? Well, it wasn’t ours to lose in the first place. But everyone is to blame, for everyone lied or got it wrong: Bush and Cheney, Obama and Biden, Trump and Pence, and now Biden and Harris. When Trump in February 2020 signed a “peace deal” with the Taliban obligating the US troop withdrawal that has just occurred, he told Americans that he expected the Taliban would act responsibly. He claimed the Taliban was “tired of war.” Secretary of Defense Mark Esper called it a “hopeful moment.” Months later, there was intensified fighting. In July, President Joe Biden, who had the choice of abiding by this deal or confronting an anticipated expansion in Taliban attacks, presented a false impression of what to expect with the troop pullout Trump had negotiated: “The jury is still out, but the likelihood there’s going to be the Taliban overrunning everything and owning the whole country is highly unlikely.”

Ending the US military involvement in Afghanistan is a noble goal. But while it was too easy for the United States, in the wake of 9/11, to launch a forever war in the land that previously defied the British Empire, the Soviet Union, and other outsiders, extrication was never going to be smooth and cost-free. History doesn’t lie. And with no honest dialogue about the war, this brutal finish is even more shocking.

The American public has been conned about Afghanistan for two decades by successive administrations. Did any of those lies do the Afghan people any good? That’s a tough question to answer this week. The 20 years of fighting did keep the Taliban at bay, and for many Afghans that was a true benefit. But the lies certainly were an offense against the American public and the Constitution. The war in Afghanistan—prosecuted in ignorance and sold with hubris and falsehoods—has been a scandal of the highest order, a fundamental violation of the national trust. An awful aspect of this fiasco is that the perpetrators and protectors of the Afghanistan fraud have not been held accountable, while the Afghans now suffer. This is their tragedy. But it was built upon the profound and bipartisan malfeasance of our government.