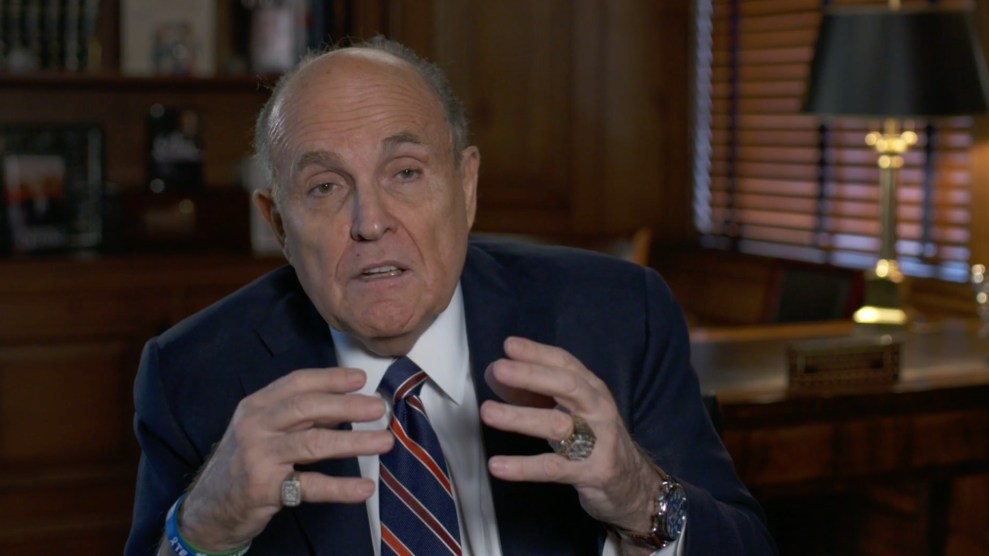 Rudy Giuliani in an unaired clip prepared for a film about the Bidens and Ukraine.Vimeo

Last year, after Rudy Giuliani’s effort to dig up dirt on Joe Biden in Ukraine had already helped lead to the impeachment of his client, President Donald Trump, Giuliani continued the effort. The former New York mayor joined with George Dickson III, the owner of California cannabis and earthquake warning businesses, to try to produce a documentary advancing discredited allegations about Joe and Hunter Biden’s involvement in Ukraine during the Obama administration. The would-be producers wanted to help Trump. And they also wanted to make money, people involved in the project said, plotting ways to profit off material they had assembled.

The venture produced no movie, only about 15 minutes of notably low-quality footage. And now the FBI is investigating the project, according to two people Dickson told about the probe.

The investigation appears tied to an ongoing federal probe into whether Giuliani violated foreign lobbying laws by working on behalf of a Ukrainian prosecutor. Mother Jones first reported that the FBI had searched Dickson’s home in June. Now, the revelation that the bureau is examining Giuliani’s abortive film suggests that the federal investigation into Giuliani’s actions in 2020 is broader than previously known.

Three people involved in the film project described it to Mother Jones as incompetent and scrambled, with the producers squabbling over money and unable to commit to a line of inquiry. “They couldn’t get their shit together,” said Matthew Galvin, a California video producer whom Dickson hired to work on the effort. “They were always distracted.”

Galvin added, “The thing I took away from it was, ‘Jesus, these guys are morons.'”

Still, with Giuliani attached, the men raised what people involved estimated was more than $1 million and hired a filmmaker, who began production in June of 2020. Dickson and Giuliani abandoned the project only in June of this year, around the time federal agents began investigating the film.

Dickson paid Giuliani more than $200,000 for his work on the effort, two of the people involved said. They said Giuliani also successfully demanded that Dickson pay for a private jet to fly him to California. Giuliani planned to appear in the documentary, but his main job was using his celebrity to help Dickson raise money, according to one person who worked on the effort last year. That role included joining Dickson to pitch potential investors. “Any move that he made, he was paid for,” the source said. “Rudy basically says, ‘Give me $200,000 and I’ll come do your little road show.'”

On June 22, FBI agents executed a search at Dickson’s home in Aptos, California. Dickson told associates that agents questioned him about Giuliani and the movie, according to people who spoke to him. It is not clear what the agents sought in their search. But Dickson’s statements to associates suggest the probe is linked to an ongoing investigation of Giuliani’s work in Ukraine by federal prosecutors in Manhattan. (Federal prosecutors in Brooklyn are reportedly separately investigating whether some Ukrainian officials, including several Giuliani dealt with in 2020, helped orchestrate a plan to meddle in the 2020 presidential election.)

Giuliani told Mother Jones in June that the investigation that led FBI agents to search his home and office in April is focused on whether he violated foreign lobbying laws by acting as an agent for Yuriy Lutsenko, then Ukraine’s top prosecutor. (Lutsenko issued and later rescinded allegations about Biden that Giuliani and Trump pushed Ukraine’s government to investigate.) Giuliani said he did nothing wrong and called the investigation “dishonest” and “corrupt.”

The FBI’s San Francisco office previously confirmed that law enforcement activity at Dickson’s home was part of an investigation. This month, a spokeswoman there said that the probe “is not an FBI San Francisco matter” and directed inquiries to the agency’s national press office. A spokesperson there declined to comment.

In February 2020, Dickson set up a Delaware-based company named SeeView Media to seek financing for the movie. According to a term sheet and draft agreements for potential investors, the filmmakers sought $10 million for the project, with a minimum investment of $1 million. Investors were promised a 5 percent annual return and a “profit share percentage” of 2 percent, according to the term sheet. The draft agreements contained a clause regarding the obligations of any “Non-United States person” who signs up as an investor, and one source familiar with the venture said the men were seeking financial backers overseas. Last year, lawyers told Mother Jones that raising money abroad for a movie that could be seen as aimed at influencing the 2020 election could violate campaign finance laws or the Foreign Agents Registration Act, if the investors were tied to foreign governments.

David and Kable Munger, brothers who own what is reportedly the country’s biggest blueberry producing company, were the largest investors in the movie, according to three people involved in the project. One of those sources said the brothers put up more than $800,000. Bob Hawk, president and CEO of Munger Brothers, told Mother Jones the brothers would not comment due to the federal investigation and because their lawyers are conducting their own analysis of the matter. “After our analysis is completed we may have additional comment,” Hawk said. He declined to elaborate. (In 2019, the Labor Department forced Munger Brothers, based in Delano, California, to pay $3.5 million in back wages and penalties to thousands of workers following accusations that the company and two corporate affiliates violated a law requiring companies to recruit US-based employees before foreign labor, and that Munger Brothers mistreated and underpaid the foreign workers it did hire.)

In spring 2020, Dickson hired a man named John Ryan to assemble footage for the film. People who met Ryan said he claimed to be a former helicopter pilot with experience on action movies made in Southeast Asia and also touted connections in right-wing media. Ryan did not respond to calls from Mother Jones.

“They tried to produce this whole controversy, and they couldn’t even produce one piece of media.”

Ryan seems to have assembled material from various sources. A roughly seven-minute clip Galvin shared with Mother Jones includes images that appear to come from material that Giuliani and Costello claim they obtained from Mac Isaac, a Delaware computer shop owner, who has asserted that Biden dropped a computer off there in April 2019 and never reclaimed it. Galvin said that Giuliani first mentioned the laptop material during a Zoom call related to the film in July 2020. This indicates that Giuliani considered using the material in a for-profit endeavor prior to sharing it with sympathetic media outlets in October 2020 in an apparent bid to hurt Joe Biden’s election chances.

The clip also includes footage of Trump asking derisively, “Where’s Hunter?” That is followed by drone photos purportedly of Biden’s Los Angeles home, then a picture of the “Hollywood” sign. There is also a “Breaking Biden” title sequence, with the music and imagery taken from the AMC hit Breaking Bad, that features images of a crack pipe and of Hunter Biden smoking a cigarette. This is one of several mocking references to Hunter Biden’s struggle with addiction.

The material assembled for the film also includes footage of Giuliani speaking, over ominous music, about corruption in Ukraine and Hunter Biden’s position on the board of the Ukrainian energy company Burisma. The younger Biden’s position there helped animate otherwise baseless claims by Trump backers that Joe Biden pushed for the firing of Ukraine’s top prosecutor to protect Burisma. The clip includes no real evidence, but the corruption allegation is illustrated with a darkly lit shot bundles of $100 bills with “The Biden Family” written on them.

Viewers then see images of various Ukrainian figures along with descriptions of their alleged misdeeds. The filmmakers link Biden to these figures by placing his picture alongside them, though he lacks known ties to them. Giuliani, on the other hand, has worked with several of the men pictured. Those include Pavel Fuks, a real estate mogul who in 2017 hired Giuliani’s security company advise the city of Kharkiv. Ukraine, where Fuks lives. Giuliani told Mother Jones in 2018 that Fuks hired Giuliani Security and Safety to advise Kharkiv on emergency services. Fuks later told the New York Times that Giuliani was “the lobbyist for Kharkiv and Ukraine.” Giuliani, who is under investigation for acting as an unregistered lobbyist for Ukraine, denies that.

Even the filmmakers realized this material was weak. According to Galvin and two other people involved in the film project, Dickson and Giuliani cut ties with Ryan late last year, due to what they considered his failure to produce usable material. Dickson then sought other options. He contacted another producer and also considered attempting to charge $9.99 for viewers to stream the footage, or just having Giuliani air it in a television appearance. But the problem, Galvin said, was that “they had nothing.”

“If they had anything, they would have tried to flood the zone with it,” he said. “They tried to produce this whole controversy, and they couldn’t even produce one piece of media.”