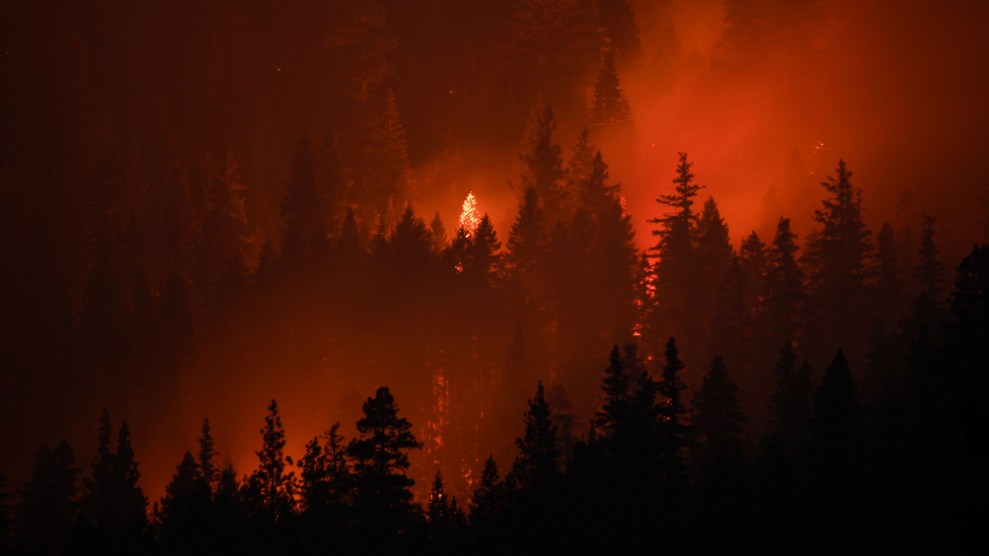 In this long exposure image taken at night, plumes of wildfire smoke rise as trees burn during the Dixie Fire near Susanville, Calif.Patrick T. Fallon/AFP/Getty

Wildfire are normally a critical component of a healthy landscape, but these blazes are now metastasizing into monsters that obliterate ecosystems. A wildfire that would once chew through a few dozen acres of underbrush, making way for new plant growth, now burns with extreme ferocity, producing so much heat and smoke that it can generate its own thunderclouds, which light more fires. Huge fires now regularly blacken swaths of land: California’s Dixie Fire has burned 950 square miles over the past month, making it the second largest fire in state history—and it’s only 31 percent contained.

Two factors have collided to turn “good” fires into “bad” ones: climate change and, ironically enough, a history of fire suppression. Climate change means that vegetation is drier and primed to burn catastrophically. Extinguishing burns, especially those that threaten lives and structures, means that mountains of that fuel have built up.

But before we unpack what went wrong, it helps to understand how wildfires interacted with the landscape before Europeans invaded the western United States and Canada. Historically, fires acted as a kind of ecological reset button. If a lightning storm ignited shrubs and grasses, the fire would spread through a forest’s understory. This was particularly important in dry forests like California’s, where there isn’t as much microbial activity to break down dead vegetation as there is in rain forests.

Getting rid of all that plant litter removed a sort of suffocating blanket over the ground, which would have otherwise nixed growth. It also made room for new plants, which are more nutritious for herbivores. New berries would feed bears, new grasses would feed animals like deer, and new wildflowers would feed pollinating insects. “Species such as most of our ungulates—deer, elk, those kinds of critters that are very mobile—love those big patches out there, burned forest next to unburned forest,” says Dave Peterson, a forest biologist at the University of Washington. “So they have new forage and they also have cover”—the tree canopy provided by the unburned parts of the forest.

“Even if you had a hot and dry year, historically that wouldn’t necessarily have led to all of a sudden fires exploding everywhere.”

The fires were also good for plant ecology; they ensured that none of the species overgrew. Many tree species have adapted to fire, thanks to their thicker bark, which helps them survive to repopulate the forest. But fire also keeps their populations in check; the blaze will wipe out sickened individuals and those too young to have grown a sufficiently thick bark. The seedlings of the remaining trees thrive in the burn scar, where the soil has now been injected with nutrients from all that charred material, and where more light is able to reach the ground.

Plus, if the low-lying vegetation is periodically burned off, it won’t build up into the kind of stockpile that could feed a massive wildfire. “I think it’s hard to imagine nowadays just how little fuel that would have been in these dry forests when you had fire every few years,” says Christopher Adlam, a fire specialist at Oregon State University. “Even if you had a hot and dry year, historically that wouldn’t necessarily have led to all of a sudden fires exploding everywhere—there just wasn’t enough to burn.”

Instead of chewing through hundreds of thousands of acres like the Dixie Fire is doing right now, the wildfires would polka-dot a landscape, creating a patchwork of burned clearings in the forest. These burn scars would become a kind of firebreak during future blazes, because they would contain little that could burn again. If lightning sparked a new fire nearby, it might just edge up to a scar and stop there. “Our landscapes had herd immunity,” says wildland fire ecologist Bob Gray, president of R. W. Gray Consulting, which advises government agencies on ecological restoration. “We had so much fire that the subsequent fire couldn’t percolate through it very well.”

When the first people arrived in North America, they exploited the benefits of small, periodic fires by setting their own to make the ecosystem more productive. But with Europeans, and later the spread of housing and industry across the western states, came the concept of fire suppression: To protect lives and property, wildfires must be extinguished as quickly as possible. In the dry forests of the American West, without a lot of microbial activity to recycle vegetation, this has led to the dangerous buildup of fuel.

Consider the area around the town of Cranbrook in southeastern British Columbia. Before fire suppression, its forests were mostly ponderosa pine and Douglas fir, with probably fewer than 50 trees per hectare. The region would experience a relatively mild wildfire every seven years on average. Any low-intensity fire burning through grass, shrubs, and timber litter would spare most of the trees, while still keeping their population in check.

But as a result of fire suppression, there are now 10,000 trees per hectare, 95 percent of which are Douglas firs. Without regular fires to regulate tree populations, the species took over. “That’s a classic example of how, if you take fire out of the system, you get a really significant change in species and in structure—basically, density in this case,” says Gray. With the trees now clustered so densely, fires can more easily spread among them and march across a landscape. Even worse, he says, with 200 times the number of trees per hectare now, “it’s not likely going to be a surface fire,” he continues, or one that mostly affects the underbrush. “It’s going to be a high-intensity crown fire, and it’ll kill everything.” In a crown fire, the flames spread between the treetops.

Thanks to a combination of dense fuels and a lack of natural firebreaks, the landscape has lost its “herd immunity.”

Thanks to this combination of dense fuels and a lack of natural firebreaks, the landscape has lost that “herd immunity.” Now, wildfires can spread quickly because they have so many new areas they can “infect.” And both plants and animals are less prepared against this kind of massive fire. “The fire burns hotter, and the species living there probably aren’t adapted to that level of heat,” Gray says. “And if the fires are occurring over a large area, it becomes quite difficult for them to reinvade a site.”

If a forest is obliterated, it creates problems that can last for years. Animals that survived won’t have cover to hide from predators. The resulting burn is also ripe for colonization by invasive species, particularly opportunistic weeds, whose seeds start blowing in from surrounding areas. If they get established first, they’ll muscle out any native species that are also trying to get back into the burn scar. “They really do take advantage of those conditions,” says Gray. “And they can really shift the ecology of a site by making it quite simple, sort of homogenized.”

So how do you know whether a wildfire was “good” or “bad” for a landscape? By counting trees via satellites, drones, and planes. In a low-severity fire, less than 20 percent of trees will have died. For a high-severity fire, it is over 80 percent. The level of destruction can vary quite a bit within a single fire: The edges might burn more than the interior, or vice versa. Size is a factor too. “If the patch is big enough, basically the forest has to reinvade from the edges,” says Gray. “If it’s a 50,000-hectare fire, that’s a long process to reestablish a forest.”

Wildfire ecologists also analyze the soil structure and chemistry to determine how intense the blaze has been. The presence of a reddish iron oxide, for instance, indicates that the wildfire burned very hot. If scientists find that root structures and buried seeds survived just fine, that’s an indication of a less severe blaze.

Ironically, the unholy blazes that now burn across the western US and Canada are devastatingly destructive to forests and cities—and produce dangerous smoke—but they’re also helping tame the fires that will come after them. “Some of the bigger wildfires are now running into previous wildfires, and guess what? Fire intensity goes down,” says Peterson. “And that’s what used to happen more historically. So whether we want it to or not, this is what’s going to happen with the big fires that they can’t control.”

The solution, say fire scientists, is at once simple and daunting: more controlled burns by fire agencies, and lots of them. Indigenous peoples had it right—lots of smaller fires ensure healthy ecosystems and check out-of-control blazes. Shrinking the supply of dead undergrowth will be increasingly critical as the climate warms and droughts grow more intense, speeding up the production of dangerous fuels. “What we’re seeing now is probably rather minimal compared to what we might be seeing by the middle century,” says Peterson. “And certainly, beyond that, all bets are off.”