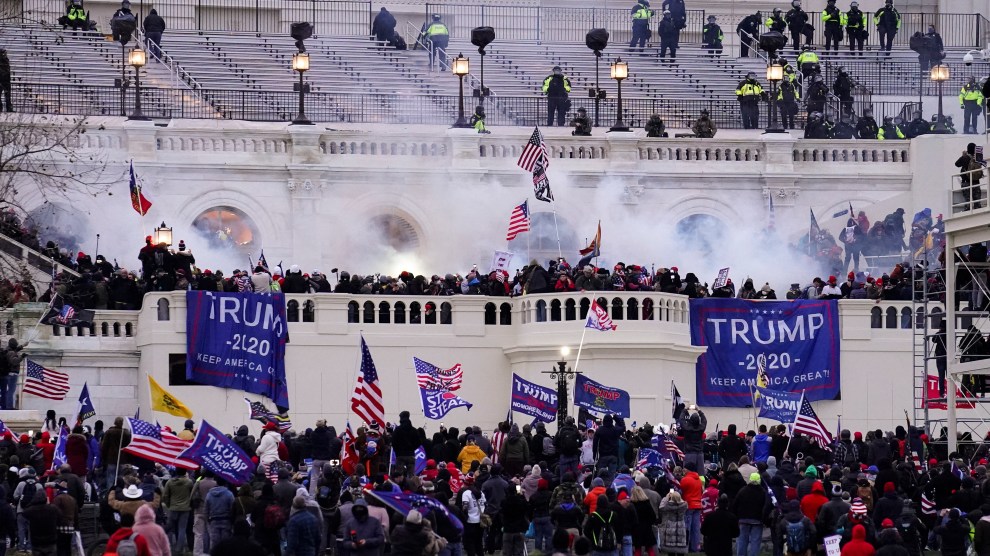 The US Capitol on January 6, 2021John Minchillo/AP

The FBI is investigating “seditious conspiracy” charges related to the January 6 attack on the US Capitol, according to a search warrant served Tuesday night on a lawyer for the far-right Oath Keepers’ militia group.

Kellye SoRelle, the Oath Keepers’ general counsel, tweeted Wednesday that the FBI had seized her phone. The action would seem unusual, since SoRelle is a lawyer who says she has provided advice to defendants facing prosecution or investigation due to their actions on January 6. “[T]hey have all my clients and my comms,” she commented in a message to Mother Jones. “[It’s] unethical as shit on their part.”

SoRelle is close to Oath Keepers founder Stewart Rhodes, who has not been charged with crimes related to the siege of Congress, but who remains a subject of investigation and was with Sorelle on January 6 in Washington. Prosecutors have charged 17 Oath Keeper members with conspiring to stop Congress from certifying Joe Biden’s electoral victory; Rhodes is not named, but is identifiable as “PERSON ONE” in court documents detailing his extensive online and phone communications with Oath Keeper members ahead of and during the siege of Congress. FBI agents seized Rhodes’ phone in May as part of their investigation. Rhodes had stated previously that he believes he may “go to jail” over the events of January 6, but he denies wrongdoing and has accused prosecutors of trying to build a false case against him and fellow Oath Keepers.

SoRelle suggested on Twitter that the seizure of her phone was a part of a baroque conspiracy connected to her interest in “deep state ties” to Mike Lindell, the “MyPillow guy” famous for promoting that false theory that Trump was robbed of a 2020 election victory by Chinese hackers and Democratic Party officials. There is no evidence agents were interested in SoRelle’s views on Lindell.

Instead, according to the search warrant, an image of which SoRelle provided to Mother Jones, the phone seizure is about suspected crimes connected to January 6. The warrant says the search is related to potential violations of nine criminal statutes: Those include crimes with which many people who entered the Capitol have been charged, from destruction of government property to trespassing and obstruction of Congress. The agents are also seeking evidence of false statements and obstruction of justice, including destruction of evidence, the warrant says.

So a couple of weeks ago I accidentally stumbled across the deep state ties to Lindell, when I did- I received wrath from the tie to a large firm. Yesterday my cell phone was taken by the FBI with a search warrant. I am doing nothing but seeking the truth…. I hope you are too.

Last March, the acting US Attorney for the District of Columbia, Michael Sherwin, said during an interview on 60 Minutes that he believed federal investigators had found evidence that would likely allow the government to file sedition charges against some January 6 defendants. “I personally believe the evidence is trending towards that, and probably meets those elements,” said Sherwin, who has since retired from the Justice Department. Sherwin’s comments, which were not authorized by Justice Department leaders, drew a rebuke from a federal judge and a review by DOJ’s Office of Professional Responsibility.

Meanwhile, prosecutors have charged no one with sedition. The reference to such charges in the SoRelle warrant, which is dated August 30, does not mean anyone will face sedition charges. But it does indicate officially that FBI agents are actively investigating that possible crime.

SoRelle says she and Rhodes did not enter the Capitol Building on January 6 or encourage others to do so. She maintains that the Oath Keepers charged to date with conspiracy and who stormed the Capitol acted without Rhodes’ approval, noting that she has spoken with FBI agents in multiple interviews since the Capitol siege.

She says she is trying to assist with the January 6 investigation. “I really have been trying hard to resolve everything,” she said on Wednesday, “just like everyone else.”