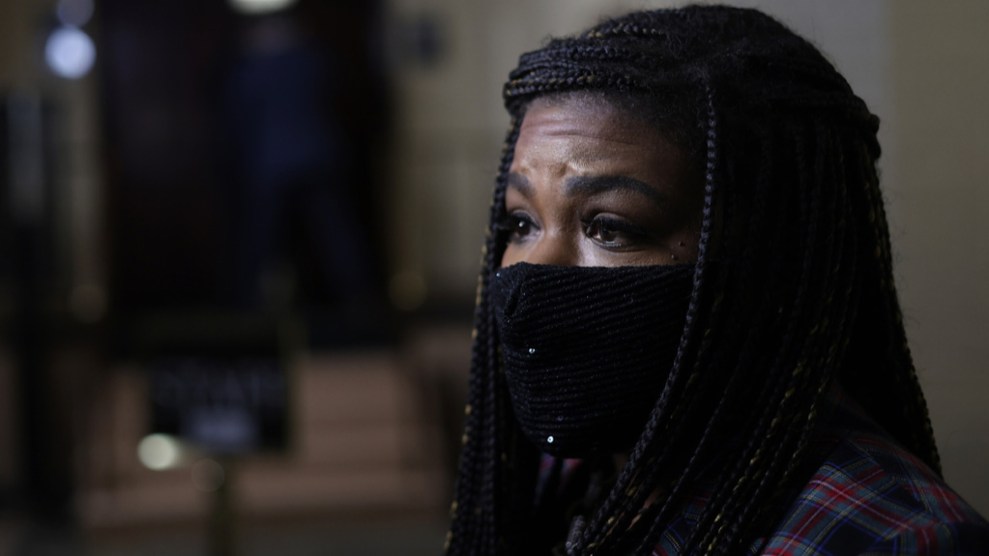 U.S. Rep. Cori Bush (D-MO) talks to members of the press after a House Democrats closed-door meeting at the U.S. Capitol September 27, 2021 in Washington, DC.Alex Wong/Getty

During a Thursday House Oversight Committee hearing about state laws blocking abortion access, representatives shared personal stories about their abortions in condemnation of SB 8, the Texas law that serves as a near-total ban on abortion.

Rep. Cori Bush (D-Mo.) talked about a church trip she’d taken, the summer after graduating high school, during which she was raped by an older man who was “a friend of a friend.”

Rep. Cori Bush: "My abortion happened on a Saturday…Choosing to have an abortion was the hardest decision I had ever made. But at 18 years old, I knew it was the right decision for me…in the summer of 1994 I was raped, I became pregnant and I chose to have an abortion." pic.twitter.com/cKykuIIZOz

“I was confused, I was embarrassed, I was ashamed,” Bush said. “I asked myself, was it something that I had done?”

She realized she was pregnant after missing her period and flipped through the phone book to find an abortion provider.

Sitting in an abortion clinic while nine weeks pregnant, Bush recalled, she didn’t know how she would have been able to support a child at just 18 years old. Overhearing the clinic workers talking, Bush recalled their comments about the patients: “They ruined their life,” she remembered hearing. “That’s what they do.”

“’They‘ being Black girls,” Bush said. “I was being talked to like trash and it worsened my shame.”

Stressing the disproportionate harm the Texas law poses for communities of color and LGBTQ people, Bush said, “We live in a society that has failed to legislate love and justice for us.”

Rep. Barbara Lee (D-Calif.) talked about her upbringing in El Paso, Texas, where she attended a Catholic school that failed to teach comprehensive sex education. Even today, Texas middle schools are not required to teach birth control methods beyond abstinence. When she faced an unwanted pregnancy, she received help from a family friend who knew of services in Mexico and decided to cross the border for an abortion.

Rep. Pramila Jayapal (D-Wash.) talked about how she chose to get an abortion after doctors told her that her pregnancy would be high risk for her and the child. “I did not suffer from living in a state that does not allow pregnant people to make these choices,” she said.

“They’re worried they will have to delay life-saving care for people who are very sick.”

“My colleagues are asking if they’re still allowed to treat an ectopic pregnancy or a miscarriage,” Moayedi said. “They’re worried they will have to delay life-saving care for people who are very sick.”

They also called on the Senate to pass the Women’s Health Protection Act, which the House moved forward last week. The bill would guarantee abortion rights granted under Roe v. Wade and Planned Parenthood v. Casey, and block the enactment of laws, rules, or standards that go against those rights.

Rep. Judy Chu, who sponsored the legislation, said, “Everyone deserves equal access to comprehensive and safe reproductive healthcare, no matter where they live, free from political interference.” She added, “But anti-abortion extremists have been working ever since the passage of Roe v. Wade to put abortion service out of reach for as many Americans as possible. Texas’ SB 8 is just the latest example.”