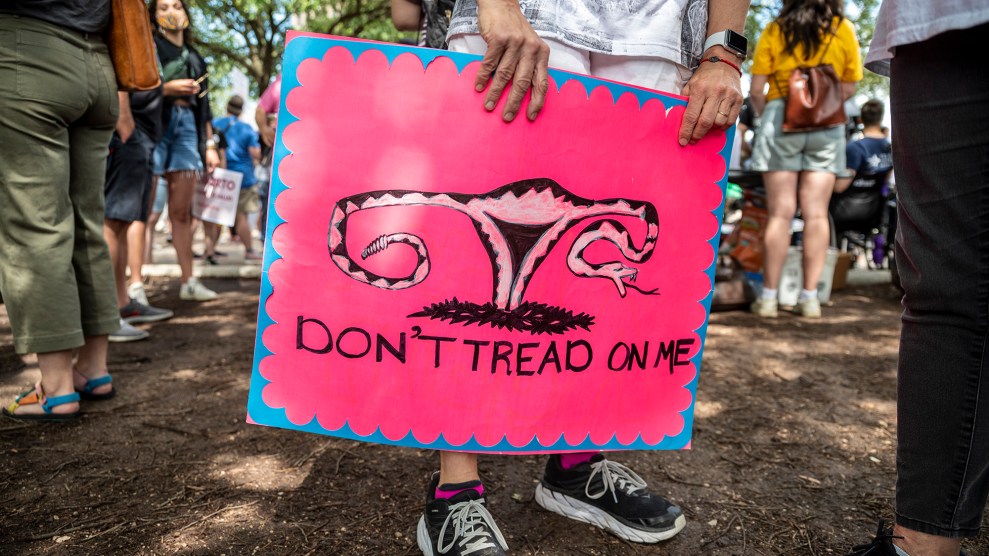 A protester holds a sign outside the Texas state capitol in May 2021.Sergio Flores/Getty

On Monday and Tuesday, the rain in Tuscaloosa, Alabama, was relentless. But on Wednesday morning, Hurricane Ida retreated for a little while, the sun reappeared with a vengeance, and the humidity stubbornly hung over the Southeast. At the West Alabama Women’s Center, it was business as usual, except for one thing: The protesters who usually clustered behind a series of white poles bordering the clinic’s parking lot had not reappeared. It felt like an ominous sign on a morning when the right to abortion access was once again being decimated. “Maybe they’re out celebrating,” joked Dr. Leah Torres, the clinic’s abortion provider. Needless to say, her delivery was humorless.

At midnight, a Texas law had gone into effect that bans abortion after six weeks, before many people even know they’re pregnant, and allows any private citizen to sue both abortion providers and anyone who “aids and abets” patients trying to obtain an abortion.

“This is uncharted ground,” says Robin Marty, director of operations at the West Alabama Women’s Center and author of the Handbook for a Post-Roe America. Now, the clinic is preparing for an influx of patients from eastern Texas and from Louisiana, where clinics have experienced interrupted services due to the hurricane. Marty tells Mother Jones that at least two of the three clinics in Louisiana are not open this week. “That’s how it is right now. We in Alabama are getting Louisiana patients calling currently and that’s before we have to deal with the overflow of Texas patients.”

But clinics in nearby states aren’t just shoring up to withstand more strain on an already strained system at the intake level. They are also wrestling with a reality in which physicians who provide abortion care are targeted and criminalized for their work. The West Alabama Women’s Center is currently dealing with the fallout from a fight over Torres’ Alabama medical license. In the office that Torres and Marty share, Torres’ various degrees are displayed along with a hard-won copy of that license, to which a handmade price tag has been taped—$115,360.93—reflecting the arduous and expensive journey to get it.

Last year, Torres moved to Tuscaloosa from New Mexico for the opportunity to provide full-spectrum reproductive health care—which includes abortion—and the state issued her a temporary medical license while she waited for her permanent license to clear. Shortly after she began her new job, two men from the Alabama medical board came into the clinic when Torres was in the middle of performing a dilation and curettage procedure on a patient who had come in with excessive bleeding and needed the tissue removed from her uterus. The clinic’s staff told the men they would need to wait, despite their protestations. After Torres was done, the men informed her that they were revoking her temporary license. “Had they showed up five minutes earlier, I don’t even want to think about what would happen to that patient if I couldn’t see her,” Torres says. “I also can’t speak to the patients that we had to turn away, patients that were in the waiting room. I don’t know what their stories were. I could have had another patient bleeding like that. I don’t know.”

From there, Torres found herself entrenched in a lengthy legal battle. The state was alleging Torres made fraudulent statements in her application for an Alabama license. One of the questions the state took issue with asked whether Torres had had any court action taken against her; Torres had answered no because though she had a malpractice lawsuit in another state, but it had been settled and never made it to court. Torres received an email in July that said the question was meant to inquire about any malpractice claim. Torres apologized for the misunderstanding and included all the documents relevant to the case. Still, her license was not reinstated. She had to take an ethics class, pay a fine, and watch the days crawl by between the monthly dates when the medical board would engage with her case. “I felt like a criminal,” she says.

The medical board’s interest in Torres may have begun with a complaint that was filed against her by another physician—someone she’s never met—just 12 days after she moved to the state. The complainant was taking issue with an interview Torres had done in 2018 while she was practicing in Utah, in which she had said patients do not have to disclose previous abortions to their physicians if they are uncomfortable doing so.

“Our choices right now are to either mitigate as much damage as we can…or just watch people harmed and forced into pregnancies or sued or fined or in jail. There’s no win for us.”

Marty says she sees a clear parallel between what happened to Torres and the ways the new Texas law targets physicians—particularly in the way it empowers any anonymous citizen to take legal action. “This [law] is about scaring doctors. This is about making sure that doctors understand that they could get sued over and over and over and over,” Marty says. “And it would impact not just their financial wealth and livelihood, but it would impact their malpractice insurance, their license, all of these things would layer upon each other to make it so they can never do any sort of medical work again.” All of this is significant and dangerous, especially in the context of the current shortage of OB-GYNs and abortion providers specifically.

Still, the work remains. And today, at West Alabama Women’s Center, and in clinics across the country, it was mostly business as usual. Looking ahead, Marty is already reflecting on how people will likely step up in really incredible ways, which she ironically worries could serve as a defense for future abortion litigation. “If we as activists, and as clinic workers, and as the movement itself manage to help people get care, that is obviously good for pregnant people. But in the grander scheme of things legally, that actually then serves to show that, ‘Hey, this law did not have nearly the devastating impact that people claimed that it would,’ and the courts are going to use that as an excuse to say, ‘Look, it can stay in effect. Look, more states can pass this,'” she says. “So our choices right now are to either mitigate as much damage as we can, and then hope against hope that the courts don’t see that as, ‘Hey, look, it’s really not that bad,’ or just watch people harmed and forced into pregnancies or into dangerous situations or sued or fined or in jail. There’s no win for us.”

Marty’s book, which lays out how to get care if you need an abortion and cannot access it, is quite literally a guide to what happens next in this country. It’s also a call to action. “It’s a to-do list of how to protect yourself during civil disobedience and, more importantly, how to figure out if you’re the sort of person who should do civil disobedience because it is privileged people who need to step up and do it,” she says.

As we saw last night, relying on the courts will not cut it. “Elections aren’t going to save us,” she says. “If they passed a federal right to an abortion, do you think that there’s not going to be some way that they will appease red states by letting them opt out in some limited way?”

“As long as there are people who oppose abortion, any person who works in a clinic is in legal, financial, and physical danger.”