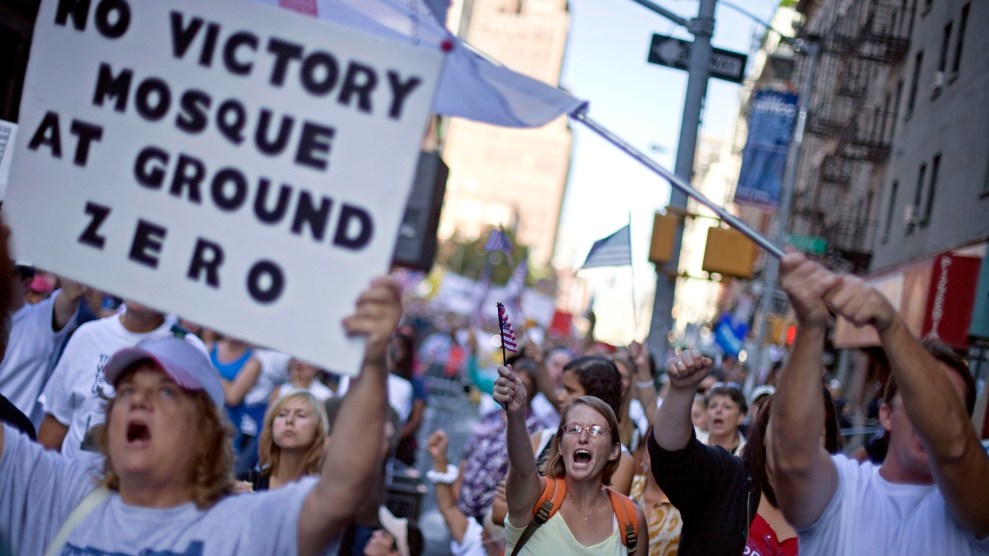 There’s no one moment that gave us Donald Trump, because his rise was the sum of many afflictions: a susceptibility to fraudsters, a broken media ecosystem, a failing ruling class, white grievance politics, the arbitrariness of state boundaries in the Midwest. The man himself may be extraordinarily shallow, but the forces that brought him to power are historically complex. Still, there’s one incident I always circle back to when I think about not just the last few years of American politics, but the last two decades—the 2010 fight over the construction of an Islamic center in lower Manhattan.

First things first: The Cordoba House, as the project was initially called (it later took on the more innocuous name of Park51), was never just a mosque, and it was never actually being built at Ground Zero. When Sharif El-Gamal, a New York City real-estate developer, went scouting for space in Lower Manhattan, he settled on a spot two long blocks away, in an old Burlington Coat Factory on Park Place. El-Gamal, the son of a Catholic mother and Muslim father, envisioned a community space—with a mosque, sure, but also a fitness center, a food court, a day care, and an auditorium, spread out over more than a dozen floors. It would even include a memorial to 9/11.

But in August 2010, the details of the project weren’t the point. As the white rage of the tea party boiled over that summer, conservative activists and politicians simply saw an opportunity. And so “the Ground Zero Mosque” was born. Glenn Beck connected it to the specter of Shariah law. Other opponents, after perhaps a cursory amount of Googling, concluded that naming the project the Cordoba House was an homage to the Muslim conquest of Spain more than a millenium earlier—in other words, this that was a way of declaring 9/11 a great Islamic victory. (The organization El-Gamal was working with on the center, the Cordoba Initiative, considers the name an homage to the history of religious intermingling in that city.)

The usual suspects fanned the flames. Fox News host Greg Gutfeld said he was going to open a gay bar next door to the site to troll the Muslims who would come to worship. The New York Post, which covered the whole saga with glee, allowed at one point that it was “possible—maybe even likely” that the project was “entirely peaceful.”

Possible—maybe even likely! And some of them, I’m sure, are good people.

But with Congress in recess and the ascendant tea party in the news, other mainstream outlets piled on, too, allowing—not for the first or last time—the anger of conservative activists to serve as a sort of assignment editor. For a time that August, in the heat of the congressional Midterms, the Cordoba House was the biggest story in America. Republicans used it as a bludgeon against everyone else. And plenty of Democrats found it easier to fall in line than to fight back. Harry Reid came out against the project. So did Howard Dean. So did Joe Lieberman. Several New York Democratic congressmen opposed it.

Polls showed a majority of Manhattanites supported the project, but nationally, it faced overwhelming bipartisan opposition. Then, as ever, people in other parts of the country were eager to use New York as a prop for their political agendas but cared little for the people who actually lived there. Sarah Palin, at the time the most prominent Republican politician in America, tweeted out her own call to action: “Peaceful Muslims, pls refudiate.”

“Pls refudiate” was an easy term to mock, but Palin’s message was potent. In North Carolina, a tea party nurse named Renee Ellmers accused her opponent, seven-term Democratic incumbent Bob Etheridge, of refusing to take a stand against the “victory mosque.” After footage of Cordoba (the Spanish one) flashed across the screen, she addressed the camera: “We should tell them in plain English: No, there will never be a mosque at Ground Zero.” Ellmers would go on to win in November, as Republicans across the country channeled the tea party’s rage (against this, against President Barack Obama, against everything) into a landslide the nation is still digging itself out from.

By the middle of August, the project had become an issue of national importance so profound that Obama himself felt compelled to weigh in. Speaking at the White House’s Ramadan dinner, he defended the project. It was a simple matter of freedom of worship, he explained. And that was really the issue here. Because the Park51 controversy was not just the story of one development in Manhattan. Park51 got the biggest headlines, but there were efforts to block the opening of mosques and Islamic centers in Tennessee, in California, in Kentucky, in Wisconsin, and elsewhere. There were incidents of vandalism and arson. In cities and towns across the country, the freedom of Muslims to worship was treated not as something enshrined in the Constitution, but as a matter of legitimate political debate—the kind of thing citizens could simply decide to stop, if they were loud enough. And they were really fucking loud.

You shouldn’t be surprised to learn that Trump managed to fit himself into the story that summer, leaking to the press a letter he’d written offering to buy the Park51 property from El-Gamal.

“I am making this offer as a resident of New York and citizen of the United States, not because I think the location is a spectacular one (because it is not), but because it will end a very serious, inflammatory, and highly divisive situation that is destined, in my opinion, to only get worse,” he wrote.

The kind of hostility to religious liberty on display during the Park51 controversy was considered simply ordinary in Republican politics. Antagonism toward a major religion, or at least this major religion, wouldn’t stop you from getting feted in the national press or booked on Sunday shows, and it certainly wouldn’t cost you many votes in a primary. Trump, who in 2015 would propose blocking Muslims from entering the United States entirely, understood that the professions of support for people of faith that undergirded his party did not apply to everyone. Quite the opposite—the opposition to specific groups was a powerful unifying force.

The Ground Zero Mosque was the story we really didn’t need in 2010, but a decade later, it provides essential context for where we are today, not just for what it said about where the Right was headed, but for what it said about other people and institutions, too. The development continued, but the Islamic center hasn’t materialized—it’s mostly just condos now. On Sunday, Jonathan Greenblatt, the national director of the Anti-Defamation League, formally apologized for his group’s prior position that the proposed development should be relocated somewhere else.

“As the leading anti-hate organization in the US, with experts tracking extremism of all sorts, ADL is committed to help our Muslim allies counter Islamophobia,” Greenblatt wrote on CNN’s website. But “as a dear Muslim friend told me recently, ADL’s stance on the Cordoba House project was ‘a punch in the gut to the Muslim community.’ I hope that by righting this wrong, we can be better allies in the fight against the rise in anti-Muslim hate that is coming—and it is coming.”

It was a notable statement, freely offered. But I couldn’t help but notice the forum it was published in. CNN, after all, was also a driver of the controversy. Here’s a CNN segment in which reporter Deborah Feyerick interviewed El-Gamal:

FEYERICK: Plans include a performing arts center, swimming pool, child care facilities, and, yes, a Muslim prayer space two blocks from the worst terror attack in U.S. history. Why not have a prayer space for Buddhists or Jews or Christians or why must it be Muslim? It can’t be just a business decision.

EL-GAMAL: There are Jewish community centers all over the country.

FEYERICK: But the Jews didn’t take down two towers.

EL-GAMAL: There are YMCAs all over the country.

FEYERICK: But the Christians didn’t take down the towers.

EL-GAMAL: And this is a need that exists.

FEYERICK: For those still sensitive and so raw to this, their question—their overriding question is, why here? Why so close? It’s two blocks but it was close enough that landing gear ended up on the roof. Why?

This was emblematic of the way this real estate project played out in so many news segments. Feyerick was just asking the question, you know—for those still sensitive and so raw to this.

In an in-studio appearance on Joy Behar’s HLN show, Pamela Geller, an anti-Islam activist, proposed turning the site instead into a center dedicated to the victims of “hundreds of millions of years of Jihadi wars.” Behar pushed back, but these were the kinds of voices mainstream outlets elevated.

There was some real trauma there in some of the reactions from victims’ families, but that didn’t explain the totality of what was happening, and why it ballooned like it did. The national debate was an assertion of who counted and who didn’t, a show of strength and power, wrapped up not just in the physical opposition to one group’s religious liberty, but in the actions of the people and institutions who, when asked to pick a side, joined in the mob. I’ll always think of the summer of 2010, and the weaponization of a construction project in Manhattan, as a flickering glimpse of things to come—not just the political potency of foaming prejudice against Muslims, but also the readiness with which those pushing the story were accommodated.

There really was a victory symbol in all of this—there were proponents of a political ideology using a construction project to demonstrate their power. It just wasn’t the people Fox News warned you about.