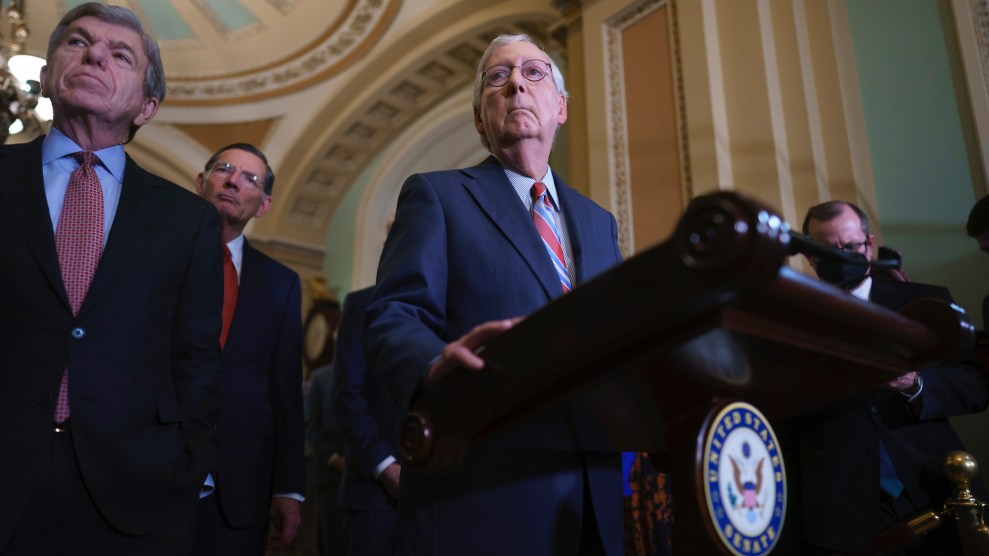 It’s no surprise Republicans hate the taxes President Joe Biden has proposed to pay for his sweeping economic agenda. According to House Republicans, the White House’s proposal to raise the corporate tax rate from 21 to 28 percent “cuts employment” and “slows economic growth,” thus “harming U.S. economic competitiveness and increasing the cost of investment in America.” To make their case, Republicans come bearing receipts: a 2021 study from the Tax Foundation, the self-described “leading independent tax policy nonprofit.”

But a look at some of the backers of this nonprofit suggests that “independent” has nothing to do with non-partisan. Major funders include the conservative Koch family foundation as well as the foundation of the late Richard Scaife, a billionaire known as the “funding father of the right” for his bankrolling of conservative causes. Several former Republican lawmakers serve on the Tax Foundation’s board, alongside executives from major US corporations, including PepsiCo and Microsoft. Both authors of the study, Garrett Watson and William McBride, have longstanding ties to right-wing think tanks and causes. McBride authored a report in favor of a GOP tax plan in 2015 that a fellow economist told the New York Times “would not pass muster as an undergraduate’s model at a top university.”

A flurry of studies and reports warning of economic doom for workers and small businesses have proliferated with the rising possibility that Democrats will succeed in bringing Biden’s tax proposals over the finish line. But as Democrats race to finish their work in drafting revenue-raising measures to fund their sweeping economic agenda, the GOP is turning to studies backed by corporate interests and conservative dark money groups. This study-to-GOP-talking-points pipeline points to the parallel universe in which the ultrarich and businesses attempt to protect their interests through funding various white papers and pseudo-scientific studies.

“Corporate interests will say or do anything to preserve the broken status quo, including lie to families that overdue investments in childcare, education, and climate change are somehow not in their interest,” says Kyle Herrig, the president of Accountable.US, a government watchdog group that researched these ties. “These studies are all about manufacturing excuses to do nothing and avoid paying their fair share.”

When the White House proposed its sweeping $4.1 trillion economic agenda earlier this year, it suggested raising the funds to pay for it primarily through tax increases on corporations and the ultrawealthy. In addition to raising the corporate tax rate, Biden floated proposals that would force multinational corporations to pay their fair share and roll back much of the Republican’s signature 2017 tax law that amounted to a massive corporate giveaway.

Democrats have remained undecided as to how they’ll pay for the $3.5 trillion budget bill that now houses much of that agenda—and, by virtue of the budgeting process, can pass with only Democratic votes. Senate Majority Leader Chuck Schumer (D-N.Y.) on Thursday told reporters that the White House and congressional leaders now agree on a menu of possible tax options. What they ultimately choose depends on what, exactly, Democrats decide will remain in their spending bill.

Republicans are nevertheless on defense. They have taken various talking points handed to them by conservative groups and are running with them. Sen. Mike Crapo (R-Idaho) has touted an analysis from the US Chamber of Commerce claiming the corporate tax increases would hurt small businesses. Though the group claims to represent Main Street, many of its board members represent multinational corporations. Liberal watchdog research group Public Citizen found in 2016 that 74 “extremely wealthy” organizations and individuals account for 74 percent of the Chamber’s funding. The author of the Chamber of Commerce’s report, Curtis Dubay, formerly worked at the Heritage Foundation and served on President Donald Trump’s Treasury transition team after supporting the former president’s tax policies during the campaign.

Nearly all Senate Republicans signed a letter citing research from the Committee for a Responsible Federal Budget that determined the actual cost of the $3.5 trillion budget will “will likely exceed $5 trillion.” Fox News commentator Maria Bartiromo also quoted the Committee as she criticized House Speaker Nancy Pelosi (D-Calif.) for a “pie-in-the-sky tax-and-spending plan” in late July. The Committee for a Responsible Federal Budget describes itself as “an independent source of objective policy analysis,” but its top disclosed funders include the foundation of Peter G. Peterson, a Republican billionaire well known for his fiscal conservatism and critiques of entitlement spending. Its president, Maya MacGuineas, led a campaign called “Campaign to Fix the Debt” that was, in practice, an effort to recruit top CEOs to push for lower corporate tax rates.

Another blog post from Republican members of the House Ways and Means Committee cites a study from business consultancy EY to claim that Biden’s proposal to close the “stepped-up” basis loophole—which currently allows heirs to avoid paying certain income taxes on inherited assets—amounts to a “supercharged second death tax” that would kill jobs and slash workers’ paychecks. The study was paid for by the Family Business Estate Tax Coalition, which claims to represent “family-owned” businesses and farms but maintains members such as the US Chamber of Commerce and similarly corporate-backed trade organizations. (That provision was ultimately dropped from House Democrats’ taxation plan.)

Washington does have its share of truly independent, nonpartisan economic research organizations, such as the Center for Budget Policy and Priorities. And Democrats, too, have their own left-leaning think tanks that produce research framed around questions favorable to the party’s policy positions. Many of the experts who now advise Biden on the economy hail from those Democrat-aligned shops, such as the Center for American Progress, the Economic Policy Institute, and the Washington Center for Equitable Growth.

The onslaught of GOP-aligned opposition research isn’t likely to influence the legislation before Congress as Democrats can pass their spending bill without Republican votes. But some business-friendly Democrats, too, have absorbed these talking points. Sen. Joe Manchin (D-W.V.), for example, highlighted praise from MacGuineas, the Committee for a Responsible Federal Budget’s president, for his bill to “rein in the national debt.”