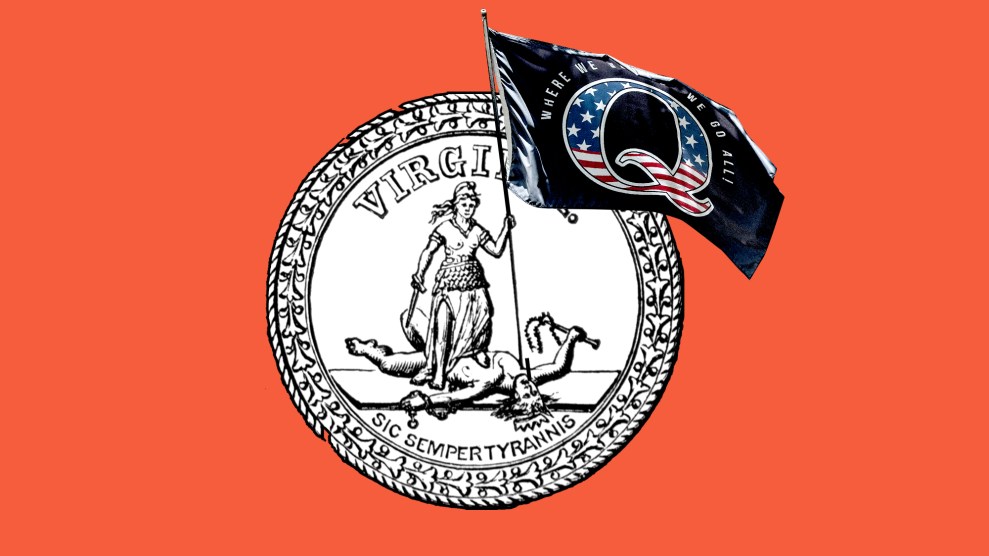 On Wednesday, Donald Trump and a group of far-right conservatives sought to whip up the Republican base in Virginia for GOP gubernatorial candidate Glenn Youngkin, who’s facing former Democratic Gov. Terry McAuliffe in perhaps the most crucial contest of the 2021 election season. At a rally in suburban Richmond organized by John Fredericks, a conservative talk show host, Steve Bannon, the once-indicted-but-pardoned former Trump adviser, state Sen. Amanda Chase, a top promoter of election fraud conspiracy theories who has called the rioters who attacked the US Capitol on January 6 “patriots,” and other extreme rightists called on Republicans to turn out for Youngkin in this increasingly tight contest. Trump phoned in to reiterate his previous endorsement of Youngkin, describing the former CEO of the Carlyle group as “a great gentleman.”

Also appearing on the program was one of the nation’s more prominent supporters of the nutty QAnon conspiracy theory.

Enter Arizona state Rep. Mark Finchem, a leader of his state’s Republican effort to overturn Trump’s 2020 loss, baselessly claiming the election was fraudulent. Now running for secretary of state and brandishing Trump’s endorsement, Finchem is also an advocate of deranged QAnon conspiracy theories. The main idea of this paranoid and irrational cult is that the world is secretly controlled by a cabal of Satanic and cannibalistic pedophiles—including prominent Democrats and other elites—and that Trump is waging a titanic battle against these nefarious forces.

Finchem’s presence at the pro-Youngkin rally—where he metaphorically locked arms with Trump and Bannon—is yet another illustration of the overlap between Trump’s GOP and far-right loony extremism. And Youngkin, though he did not attend the event, seems fine with this. His campaign has not disavowed Finchem, and it did not respond to a request for comment. Fredericks said Youngkin had thanked him “profusely” for orchestrating the rally and had supplied campaign signs to distribute to the crowd of a few hundred.

Finchem’s links to the QAnon movement are no secret. In June, CNN reported, “Finchem has repeated conspiracy theories on fringe conservative media and at least one high-profile podcast known for being supportive of QAnon. ‘We’ve got a serious problem in this nation,’ he said in a separate interview on Victory Media. ‘There’s a lot of people involved in a pedophile network in the distribution of children…And, unfortunately, there’s a whole lot of elected officials that are involved in that.'”

“There’s a lot of people involved in a pedophile network in the distribution of children…And, unfortunately, there’s a whole lot of elected officials that are involved in that.”

Finchem appeared on that QAnon-friendly podcast, which aired on May 9, with host Zak Paine, a well-known QAnon advocate and conspiracy theory amplifier. According to The New York Times, Paine’s channel on Twitch, a live streaming video site owned by Amazon, “has more than 14,000 followers and is rife with conspiracy theories about vaccines and cancer. In one stream, he and a guest encouraged viewers to drink a bleach solution that claims to cure cancer, which the Food and Drug Administration has said is dangerous. Last week [in April], he referred to a QAnon belief that people are killing children to ‘harvest’ a chemical compound from them, then talked about a ‘criminal cabal’ controlling the government, saying people do not understand ‘what plane of existence they come from.'” During the May 9 show, Finchem claimed a slow-motion coup against Trump was underway.

A few weeks earlier in April, the Arizona Mirror reported, “Finchem himself has dabbled in QAnon, sharing a widely debunked photo on Gab that actor Paul Walker was killed by the Clintons because he was ‘coming forward’ with information about alleged crimes against the Clinton Foundation in Haiti. The actor died in 2013 when the sports car he was a passenger in crashed into a lamp post and a gas pipe, which burst into flames.”

Finchem was in Washington on January 6 for the so-called “Stop the Steal” rally that led to the insurrectionist raid on Congress. He issued a tweet that seemed to justify the assault, describing the riot as “what happens when the People feel they have been ignored, and Congress refuses to acknowledge rampant fraud.” According to the Arizona Republic, “There have been allegations that Finchem was part of the mob that stormed the Capitol but he has denied them—although he refuses to release his texts and other communications from that day.”

Finchem has repeatedly refused to comment to reporters about his QAnonish beliefs, but his QAnon connection has become something of an issue in his race for secretary of state, with media reports referring to his past statements and posts. And he is currently scheduled to speak as a “special guest” at a QAnon conference later this month in Las Vegas. The roster of speakers for this shindig is a veritable parade of QAnon promoters and other fringe theorists. Ron and Jim Watkins, who are widely suspected of cooking up the QAnon scam, will be there. So will George Papadopoulos, the Russiagate figure who assails the “deep state,” Stella Immanuel, the infamous sex-with-demons doctor, and ret. Lt. General Thomas McInerney, a far-out conspiracist who has claimed the Democrats plotted with the Chinese government to create COVID-19 and then committed voter fraud to oust Trump.

Last month, when Trump endorsed him in Arizona’s GOP primary for secretary of state, the former president praised Finchem: “He is a patriot who has fought for our Country right from his earliest moments in government. Mark was willing to say what few others had the courage to say.”

The pro-Youngkin event featuring Finchem began with the Pledge of Allegiance to a flag that supposedly had been present at the January 6 pro-Trump rally that preceded the riot at the Capitol. This flag, Steve Bannon, Mark Finchem, Amanda Chase—they’re all part of the paranoid and authoritarian narrative that currently fuels the Republican Party. And with Youngkin seeking to exploit this dark energy, conservative extremism is on the ballot in the Old Dominion.