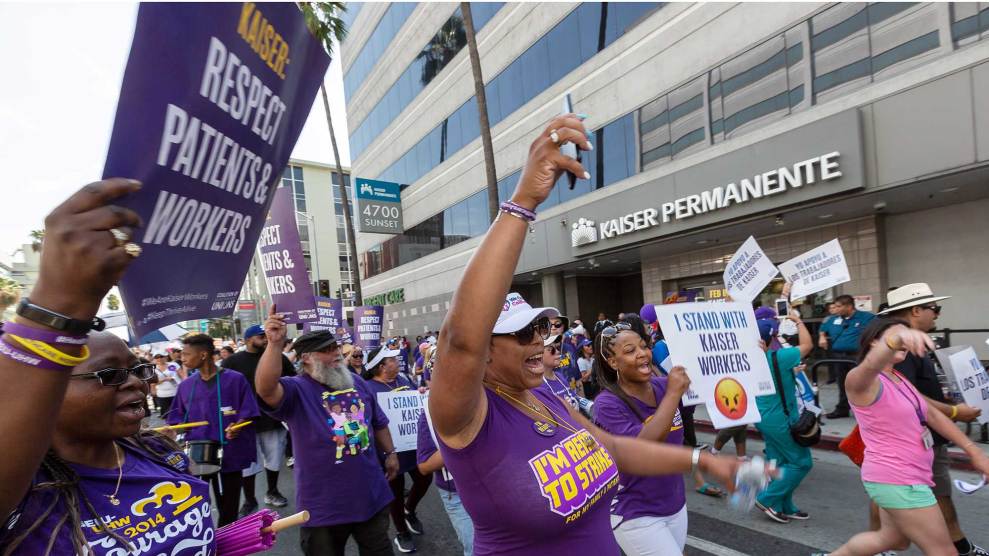 Kaiser Permanente employees protest outside the Hollywood Hospital complex in 2019, the last time workers from the health care giant threatened a strike.Ted Soqui/Sipa via AP Images

Hollie Sili, an emergency room technician at Kaiser Permanente’s Honolulu hospital, can’t afford what she makes now, much less what the health care network wants to pay her. After 21 years with Kaiser, she is working two jobs—36 hours a week at the hospital, plus another 30 hours at a local pharmacy—to help support four children on an island where a gallon of milk can go for more than $7. Now Kaiser is pushing a contract that would amount to a significant pay cut for the workers like Sili who’ve kept it profitable during the pandemic.

Sili, a member of Unite Here Local 5, is one of more than 36,000 Kaiser workers who have voted by overwhelming margins in recent weeks to authorize strikes if the nonprofit health care network does not back down from the two-tier wage system it is proposing. The deal being negotiated between Kaiser and union leaders will cover more than 50,000 workers in states spanning from Georgia to Hawaii. It could lead to one of the largest health care strikes in recent US history.

Workers’ biggest problem with the wage proposal is that it would cut starting pay for new hires by between 26 percent and 39 percent beginning in 2023. They believe it would deepen an existing staffing crisis at Kaiser’s facilities and put patients at risk by making the nonprofit unable to recruit and retain talented workers. There are also fears that it would lead to resentment among those paid less for the same work, or cause Kaiser to replace the more expensive workers covered by the old contract with new hires. Kaiser’s push for two-tier pay resembles similar proposals from Kellogg and John Deere that have already led to strikes this fall. Like Kaiser, both companies remain highly profitable.

For current employees, Kaiser is proposing a 1 percent annual raise for the next three years, which amounts to a pay cut after accounting for inflation. The Alliance of Healthcare Unions, the coalition of 21 locals now considering whether to strike, has been pushing for 4 percent raises, no two-tier wage system, and contract language that ensures safe staffing levels.

Arlene Peasnall, senior vice president of human resources at Kaiser Permanente, said in a statement that Kaiser has “the longest-running and most successful labor management partnership in the nation.” Most of the Kaiser workers I spoke to agreed that the network has traditionally worked well with union members. Sili loved her job when she started in 1999: Her colleagues were great, management was supportive, and the raises kept coming. When Daniel Stretch started working as an engineer at Kaiser’s Ontario, California, hospital seven years ago, he considered it the best job of a long career. That is what makes the current proposal feel like such a betrayal.

Kaiser argues that the cuts are needed to remain competitive, saying that its workers are paid up to 37 percent above market levels in some areas. The Alliance of Healthcare Unions disputes that figure, and Kaiser declined to provide the analysis that backs it up. Even if Kaiser is paying above market rate in some areas, it has still managed to make more than $10 billion during the pandemic. That included $3 billion in the second quarter of 2021, most of which came from investments.

“It really seems like they’re just trying to save money at the expense of those same health care workers they called heroes.”

In 2019, outgoing CEO Bernard Tyson’s pay and retirement package came to $35 million. Kaiser declined to say how much his replacement, Greg Adams, made last year. Keri Ferraro, a surgical technologist and member of the bargaining team for the Oregon Federation of Nurses and Health Professionals, says, “It really seems like they’re just trying to save money at the expense of those same health care workers they called heroes.”

Even before the pandemic, Sili noticed that her bosses were expecting more and more as she attended to patients who’d broken bones, suffered strokes, and faced mental health crises. But things have gotten worse over the past two years. She now compares her job to working at a fast food restaurant: She does what needs to be done then moves on as quickly as possible. The rushing around is particularly tough when she’s attending to COVID-19 patients whose families can’t be with them in the hospital. “That’s not the quality of care I signed up for 21 years ago,” she says.

These days, Sili usually works a 12-hour shift from noon to midnight. But due to staffing shortages, she often ends up staying until 4 a.m. before returning for another shift eight hours later. Last year, she had a stroke, which she attributes to the physical and mental stress she’s experienced at work.

Stretch, the hospital engineer, estimates that his workload and stress levels have doubled during the pandemic, while pay has remained the same. He and roughly two dozen other engineers are responsible for keeping air conditioners, humidifiers, sterilization machines, cooking equipment, TVs, nurse call buttons, and much more running at their Southern California facility. In pandemic times, they scrambled to push air circulation systems beyond their normal limits to protect patients from COVID-19.

After getting what felt like a dream job, he now feels ashamed to work for Kaiser.

Then, just as they were emerging from the worst of the pandemic, Stretch and his colleagues had to prep for the dreaded independent inspections that he says help maintain Kaiser’s status as the “Cadillac of the industry.” But when it came time to bargain earlier this year, Kaiser put forward what the Alliance of Healthcare Unions called management’s worst proposal in 20 years. After getting what felt like a dream job, he now feels ashamed to work for Kaiser.

Katie Johnson, an oncology infusion nurse at a Kaiser clinic in Longview, Washington, doesn’t see how new hires would be able to pay off their nursing school debts and maintain a decent standard of living after a 39 percent cut to starting salaries. Even at today’s higher rates, she ended up moving to Longview after being priced out of the housing market 50 miles south in Hillsboro, Oregon. She says Kaiser has always operated on a lean staffing model, but that things have only gotten worse as colleagues left the field during the pandemic. “If we can’t attract the talent now,” she asks, “how are we going to attract talent at a lower rate?”

With contract negotiations still ongoing, it’s unclear if workers will end up deciding to withhold their labor, which requires giving Kaiser a ten-day notice. In 2019, Kaiser backed down from a similar two-tier plan after more than 80,000 licensed vocational nurses, technicians, and other union members represented by the Coalition of Kaiser Permanente Unions announced they would strike. It could retreat again, or decide not to back down. That would mirror what happened in 1986, when Kaiser pushed through two-tier wages by outlasting workers who struck for six weeks.

Sili has been working to make sure the members of her local are ready to defeat Kaiser this time. “The choice is yours,” she says to colleagues. “We can sacrifice now temporarily or suffer permanently.” As she drives to work, she steels herself with a phrase that has become a mantra: “You are worth more.”