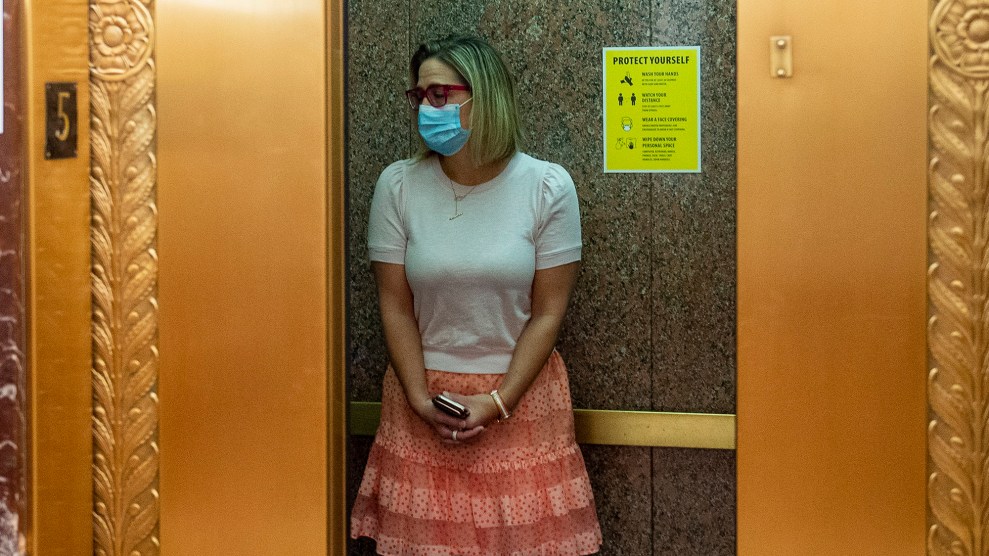 Kyrsten Sinema idolizes John McCain. That’s her characterization, not mine. “John McCain was my hero,” she said in 2019 in response to Donald Trump’s criticism of the 2008 Republican presidential nominee. He was a “personal hero,” she said in a floor speech earlier this year. During her 2018 campaign, Politico reported recently, she would frequently tell staffers, “I want to be the next John McCain.” She is close friends with Meghan McCain, the late senator’s eldest daughter—they sometimes text back and forth late at night—and has described herself as the torchbearer for Arizona’s “long history of practical and pragmatic individuals in Congress” (a phrase that in her telling includes not just McCain but Barry Goldwater). She literally sits at McCain’s old desk.

It makes sense that Sinema would want to invite the comparison. McCain was a successful politician in Arizona for a long time, who seemed to maneuver his way into the middle of big political debates in Washington no matter which party held power. He maintained a strong enough reputation as an independent-minded “maverick”—no matter the reality—that a Democrat running for president once asked him to be his running mate. It was, and still is, a pretty strong brand.

And it’s not a totally meritless comparison, either. Sinema, like her predecessor, has worked hard to position herself as a sort of fulcrum upon which all else in the Senate rests—she is influential and erratic, with real across-the-aisle friendships, and she insists that her obstinacy is necessary, actually, for the long-term health of the institution. McCain was censured by Arizona’s Republican Party; Sinema is facing the threat of censure from Arizona’s Democratic Party. When she dramatically gave a thumbs-down to an amendment to raise the minimum wage to $15 earlier this year—a largely symbolic vote, to be clear, on a largely symbolic amendment—supporters and detractors alike pointed out the obvious parallel.

“We weren’t always in agreement with John McCain,” says Luis Avila, a Phoenix community organizer who campaigned for Sinema in 2018. “But at least he would tell us where he is.”

But Sinema is missing perhaps the most important facet of McCain’s persona—the glue that, more than any stubbornness or mavericky vote (I mean, they weren’t that frequent), was responsible for his exalted status: As the Washington Post’s Dave Weigel recently pointed out, John McCain never shut up. The man was ubiquitous. He absolutely craved the spotlight. He practically had an endowed chair on Meet the Press. He appeared in Wedding Crashers. When McCain died, several thousand reporters all filed stories at once about his famous press scrums in the Capitol or on the campaign trail—where his pioneering innovation was literally just a bus, the “Straight Talk Express,” where he talked a lot. He was famous for his town halls. Like his avowed hero, Theodore Roosevelt, McCain thought of himself as the “man in the arena,” and he reveled in the attention. This radical accessibility sustained his power—it ensured he had a platform for whatever it was he was fired up about.

Sinema used to host a talk radio show and bring a bullhorn to protests and show up at conferences to say provocative things. She was eminently quotable—probably too quotable for her own good, as she found out when she started running for office. But that was all a long time ago. As a senator, she is borderline hermetic. She almost never speaks to the press. When I was reporting on Sinema’s rise for the magazine—for which, like every other recent profile, the senator declined to be interviewed—the most in-depth Q&A I could find with her in recent years was from a running podcast. (She was jogging the entire time; I think she ran like 10 miles.)

It’s just sort of understood in Washington that Sinema does not consider answering questions about her job to be a part of her job:

“Literally never walking down this hallway again but thanks guys,” Sinema says after I asked about her views on the recount being run by Republicans in her state (she never takes questions in the hallways)

Q: What do you say to progressives who are frustrated they don’t know where you are?

Q: There are progressives in the Senate that are also frustrated they don’t know where your are either.

SINEMA: “I’m clearly right in front of the elevator.”

No response from @SenatorSinema to my questions about reconciliation top lines, whether she opposes tax increases to pay for it, or whether she owes Arizonans more public explanations of her positions. pic.twitter.com/hY7Xha9Quq

That is a position that’s sort of in conflict with her insistence on being the Ultimate Gatekeeper for one of the most important pieces of legislation in a generation—Build Back Better, a budget bill that’s sort of a catch-all for the entirety of President Joe Biden’s domestic policy agenda. There’s really significant stuff on the table—negotiating prescription drug prices, universal pre-K, a last-ditch effort to curb climate change. It’s one thing to keep your own secret spreadsheets; it’s another to keep your own political priorities secret.

Sinema’s public persona, contra McCain, is that you don’t really need to know what she’s thinking, and it’s not even really anyone’s business. “It’s not effective to pressure me on anything,” she told Politico earlier this year when asked about her critics. “Because I am a thoughtful person who takes a lot of time, deliberatively, to make decisions, once I’ve made a decision, I feel very comfortable with it. And it doesn’t matter what other people think.”

And that evidently extends to her constituents. Last week, Karina Ruiz, the executive director of the Arizona Dream Act Coalition and a former Sinema campaign volunteer, was on a flight from Phoenix to Washington, DC, when she passed a familiar face on her way to the restroom—it was Sinema. Ruiz had met her senator once before, in 2017, but struggled to get an audience ever since. So she decided to try her luck.

In a video posted to Twitter, Ruiz introduced herself and asked her senator if she would commit to including a path to citizenship for beneficiaries of the Deferred Action for Childhood Arrivals program, in the budget reconciliation package pending in the Senate. (The Senate parliamentarian has ruled that such a provision could not be included in the budget bill, but that decision can be overruled.) Ruiz, a DACA recipient herself, told Sinema about the toll the legal limbo has placed on her family—her father was still waiting on a visa when he died of COVID last year.

Message from Karina – I am a DACA recipient from Arizona who volunteered to help elect Sen. Sinema. I asked her to follow through on her promises to immigrants in Arizona and support citizenship through reconciliation. pic.twitter.com/iw4nsrI2v7

Even if a long conversation on the flight seemed unlikely, Ruiz told me, “I really wish that she would have stopped and said, ‘Karina, I’m sorry about your dad’s loss. This is not the place and the time to have this conversation, but let’s arrange with my office that we can talk.’”

Instead, Sinema’s response was a familiar one to constituents and members of the press alike: silence. A few days later, after another encounter with a constituent pushing for immigrant rights—this time following the senator into a bathroom at Arizona State University, where Sinema is also a professor—Sinema did release a statement, not on a path to citizenship, but on the protest tactics.

“Yesterday’s behavior was not legitimate protest,” she said. “It is unacceptable for activist organizations to instruct their members to jeopardize themselves by engaging in unlawful activities such as gaining entry to closed university buildings, disrupting learning environments, and filming students in a restroom.”

You don’t have to have strong feelings about Sinema to think that perhaps a bathroom should be a place of privacy. Maybe you have strongly held views about air travel too. But for constituents who want to find out where their senator stands, there really aren’t a lot of options. While donors still get glimpses, behind closed doors, of the candid Sinema of old, Sinema, in another break from McCain, hasn’t held a single public town hall since being elected in 2018. Public events of any sort are a rarity (just as they were during her Senate campaign). She does not hold press conferences. Constituents have been arrested this year for demonstrating outside her office.

“When we talk to her staffers on issues like the filibuster to protect voting rights, they say, ‘She’s not going to comment on that issue,’” Ruiz says. “When we say, ‘Okay, the budget reconciliation, where does she stand?’ ‘Yeah, we can’t give you that information.’ I mean, it has been really about giving us the runaround, like no answer. We don’t know where she’s at. All she does is ignore and keep silent, just like she did for two minutes on that plane with me.”

Trying to find out where Sinema stands, says David Lucier, a former supporter who is still a member of the senator’s veterans advisory council, is “like talking to a wall.”

When I spoke this spring with the executive directors of Living United for Change in Arizona (LUCHA), an organization that mobilizes Latino communities around economic justice and immigration reform, among other issues, they told me they had more luck getting a meeting with Sinema’s Republican predecessors, Jeff Flake and, yes, McCain. And these were members of a coalition that had knocked on 2.5 million doors for Sinema’s Democratic slate in 2018. (At a recent ASU football game, LUCHA members stood outside holding a giant milk carton with Sinema’s face on it.) “Outside of calling her general office number, I don’t know how to get a hold of this woman,” one local labor leader complained to The 19th earlier this year. It is unusual for a senator to so assertively distance herself from the people they are elected to represent.

And it’s not really the behavior of a maverick, either.

“We weren’t always in agreement with John McCain,” says Luis Avila, a Phoenix community organizer who campaigned for Sinema in 2018. “But at least he would tell us where he is.”