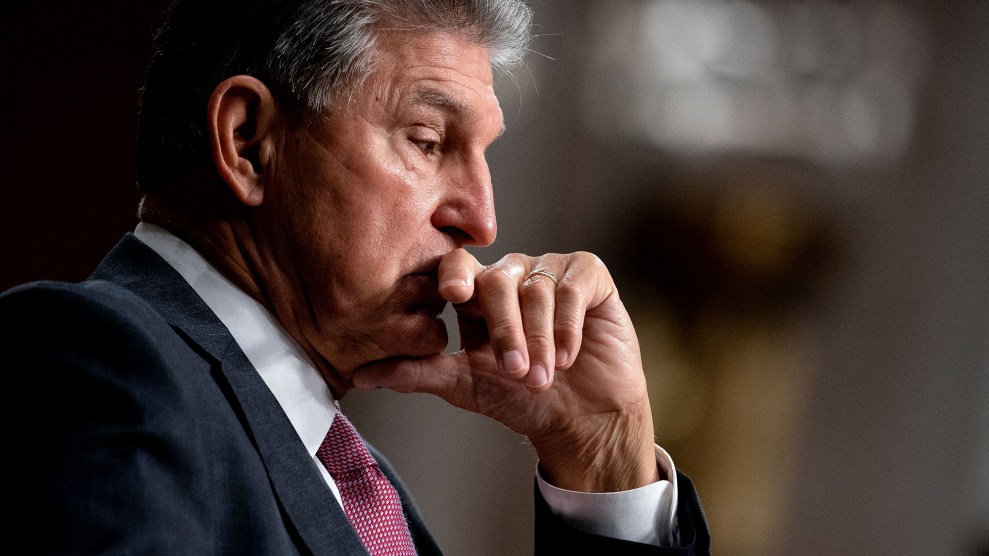 In recent days, Sen. Joe Manchin (D-W.Va.) has told associates that he is considering leaving the Democratic Party if President Joe Biden and Democrats on Capitol Hill do not agree to his demand to cut the size of the social infrastructure bill from $3.5 trillion to $1.75 trillion, according to people who have heard Manchin discuss this. Manchin has said that if this were to happen, he would declare himself an “American Independent.” And he has devised a detailed exit strategy for his departure.

Manchin has been in the center of a wild rush of negotiations with his fellow Democrats and the White House over a possible compromise regarding Biden’s ambitious Build Back Better package, and Manchin’s opposition to key provisions—including Medicare and Medicaid expansion, an expanded child tax credit, and measures to address climate change—has been an obstacle that the Democrats have yet to overcome. As these talks have proceeded, Manchin has discussed bolting from the Democratic Party—perhaps to place pressure on Biden and Democrats in these negotiations.

He told associates that he has a two-step plan for exiting the party. First, he would send a letter to Sen. Chuck Schumer, the top Senate Democrat, removing himself from the Democratic leadership of the Senate. (He is vice chair of the Senate Democrats’ policy and communications committee.) Manchin hopes that would send a signal. He would then wait and see if that move had any impact on the negotiations. After about a week, he said, he would change his voter registration from Democrat to independent.

Manchin told associates that he was prepared to initiate his exit plan earlier this week and had mentioned the possibility to Biden.

It is unclear whether in this scenario Manchin would end up caucusing with the Democrats, which would allow them to continue to control the Senate, or side with the Republicans and place the Senate in GOP hands. In either event, he would hold great sway over this half of Congress.

Without Manchin’s vote, the Democrats cannot pass the package in the 50–50 Senate. And a vote on this measure is key to House passage of the $1 trillion bipartisan road-bridges-and-broadband infrastructure bill the Senate approved in August. (Sen. Kyrsten Sinema, an Arizona Democrat, has also been a problem for the party.) Manchin has met with Biden, Sen. Bernie Sanders (I-Vt.), the chair of the Senate Budget Committee, Rep. Pramila Jayapal (D-Wash.), the chair of the Congressional Progressive Caucus, and a variety of his fellow Senate Democrats this week in an effort to strike a deal. Through it all, he has insisted that $1.75 trillion is his top and final offer, and he has constantly said no to proposed programs that almost every other congressional Democrat supports. He has told his fellow Democrats that if they don’t accept his position, they risk getting nothing.

Manchin told associates that he was prepared to initiate his exit plan earlier this week and had mentioned the possibility to Biden. But he was encouraged by the conversations with Sanders and top Democrats that occurred at the start of the week and did not yet see a reason to take this step. Still, he has informed associates that because he is so out of sync with the Democratic Party, he believes it is likely he will leave the party by November 2022.

Manchin has repeatedly said he has a significant philosophical difference with most of his fellow Democrats. He has told reporters that he believes major programs in the Build Back Better bill would move the United States toward an “entitlement mentality” and that he cannot accept that. In a recent meeting with Biden, Manchin told the president that he sees government as a partner with the public not the ultimate provider, according to people who heard the senator’s account of the conversation. He explained to the president that in his view Biden didn’t win the presidency last year by championing progressive proposals, and he pressed the president to recall his campaign promise to bring people together. He also reminded Biden that he has vowed not to support any package unless it contains the Hyde Amendment, which bans the use of federal funds to pay for abortions, except in cases of incest or when the life of the mother is at risk.

In his talks with Sanders and Democratic legislators, Manchin has said that they should be willing to accept his $1.75 trillion offer and continue to fight for the social and climate change programs he doesn’t support and make these campaign issues in 2022 and 2024, as they try to elect more Democrats. Half of a bill is better than none, he has advised.

Manchin told associates that he is hopeful a compromise that creates an overall framework for the bill can be reached by the end of this week—but at no more than the $1.75 trillion he supports. He has said that he believes if a deal is not attained on the social infrastructure package, he expects to be blamed and receive a ton of criticism.

Manchin’s press secretary did not respond to a request for comment.

Update: After this article was published, reporters questioned Manchin about it. He replied, “I can’t control rumors, and it’s bullshit, bullshit spelled with a B, U, L, L, capital B.” Mother Jones stands by the story.