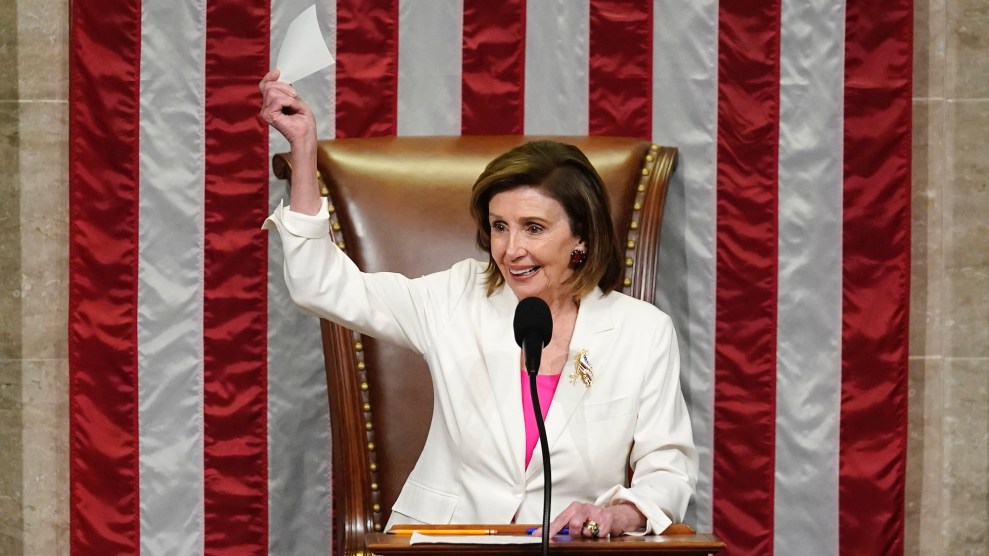 The measure includes $400 billion for universal pre-K and child care, $166 billion for affordable housing, and more than $550 billion to address the climate crisis. It contains a number of health care provisions such as a $2,000 per year cap on seniors’ drug expenses, Medicare hearing benefits, and an expansion of Medicaid in 12 states to subsidize insurance for an estimated 2 to 4 million poor Americans. The bill also extends the child tax credit, a monthly payment of $250 to $300 per child enacted as part of Democrats’ COVID-19 relief package, for another year.

A small faction of centrist House Democrats had demanded to delay the vote until they saw a  score from the Congressional Budget Office to indicate the bill’s effects on the national deficit. That score, released Thursday afternoon, indicated the package would increase the federal budget deficit by $160 billion over 10 years but did not account for revenue expected to be raised by the bill’s IRS enforcement measures, an outcome that satisfied most of the holdouts. In the end, only one Democratic lawmaker voted against the measure: Rep. Jared Golden (D-Maine), who opposed the bill’s provision to raise the cap on the state and local tax deduction, a measure that lowers taxes for the wealthy. No Republican lawmakers voted for the bill.

The vote had also been delayed by House minority leader Kevin McCarthy (D-Calif.), who delivered an 8.5-hour de facto filibuster on the chamber floor. His remarks, which began around 8:30 pm on Thursday and ended Friday morning at 5 am, amounted to a sprawling criticism of the bill and the Democratic Party. It had no measurable effect on the bill’s passage other than slowing the vote. House Speaker Nancy Pelosi (D-Calif.) called the act a “temper tantrum.”

Altogether, the legislation represents the greatest domestic investment in US history. But it’s a far cry from what President Biden and the majority of Democratic lawmakers had promised when the White House unveiled its more than $4 trillion domestic agenda this past spring. The proposal was first cut down to size when Democratic leaders then split his agenda into two: A $1.2 trillion bipartisan infrastructure bill and a $3.5 trillion spending bill that, due to the particulars of congressional budgeting rules, can pass with only Democratic votes.

But it needs the votes of all fifty Democratic senators to pass in the evenly divided Senate. Sen. Joe Manchin (D-W.V.) took issue with the overall price tag and vowed to vote against anything not closer to his preferred $1.5 trillion. Sen. Kyrsten Sinema (D-Ariz.), meanwhile, refused to back any of the corporate tax increases Democrats had proposed to pay for the legislation. Their demands prolonged negotiations for months and slashed the initial proposal nearly in half.

And the cuts are not yet final. The bill now heads to the Senate, where Manchin is expected to demand a final pound of flesh. He’s made clear he does not support the four weeks of paid family leave nor a number of climate provisions. The measure has also not been fully scrutinized by the Senate parliamentarian, who will scrub it of any spending that doesn’t clearly follow the rules of the congressional budgeting process. The allocation of $133 billion for immigration reform is particularly at risk for removal at that step.

But Manchin has indicated that in the end, he will, in fact, support the bill, telling reporters on Wednesday that he’s fine with a vote for it by Senate majority leader Chuck Schumer’s (D-N.Y.) deadline of the end of the year. Biden, it seems, is on his way to securing his legacy—it’s just been significantly cut down to size.