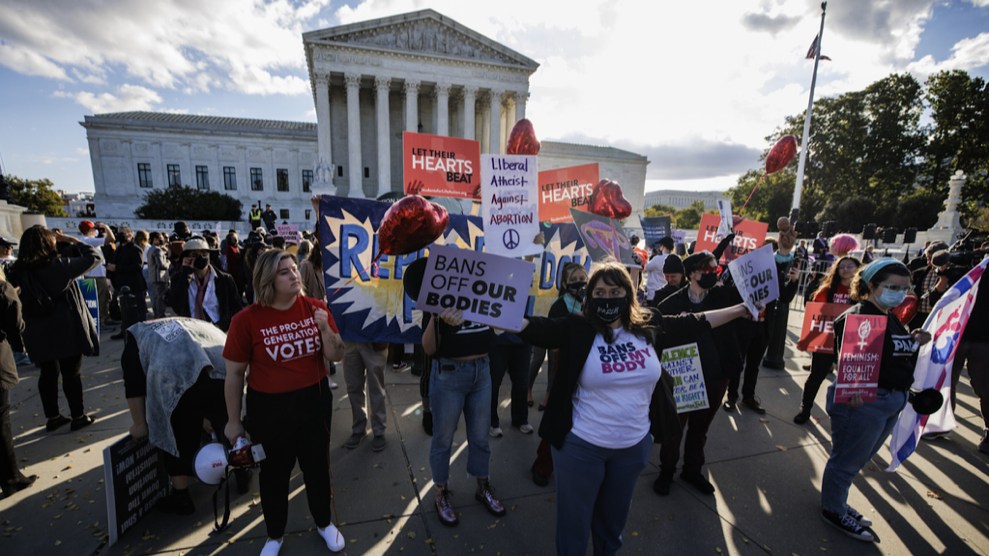 On Monday, the US Supreme Court heard oral arguments on Texas’s law prohibiting abortions after six weeks, a near-total ban. The pair of cases—Whole Woman’s Health v. Jackson and United States v. Texas—were marathon sessions with little mention of the thousands of people who have already faced the consequences of the ban. Amid a lot of abstract legal arguments, there was a distinct bright spot: a few real zingers from Justices Elena Kagan and Sonia Sotomayor.

Kagan made it clear from the beginning of the hearing that she was not amused by Texas lawmakers’ strategy around legal precedent. During talk of a 1908 case known as Ex parte Young that held that state officials could be sued in federal court to prevent them from enforcing unconstitutional laws, she sarcastically pointed out how the Texas ban skirts that rule by having private citizens sue to enforce the law.  “So, some geniuses came up with a way to evade Ex Parte Young and the broader principle that states cannot nullify federal constitutional rights,” Kagan said.

“Isn’t the point of a right that you don’t have to ask Congress?”

And Kagan didn’t mince words in describing how Texas’ law has already hurt pregnant people. Since going into effect in September, the law has caused a strain on out of state clinics taking in Texas patients and others to seek self-managed abortions. Abortions in a clinic setting have all but stopped in Texas. So when Texas solicitor general Judd Stone II claimed that the ban was just “hypothetical,” Kagan issued a scathing rebuke: “The provisions in this law have prevented every woman in Texas from exercising a constitutional right, as declared by this court. That’s not a hypothetical. That’s an actual.”

At some points, Kagan challenged her fellow justices. When conservative members expressed skepticism about whether the federal government can sue to block the law, Kagan argued that shielding Texas from federal lawsuits would encourage other states to follow suit. “We would be inviting states to try to nullify the law that this court has laid down,” Kagan said “That was something that, until this law came along, no state dreamed of doing.”

Sotomayor, too, delivered some searing remarks. She had previously questioned the $10,000 award for citizens who sue someone for performing or aiding an abortion and receive a $10,000 award if they win—her September dissent said plaintiffs essentially serve as “bounty hunters.” So she put pressure on Stone during some back-and-forth when he claimed there is no deputization of individuals targeting those who go against SB 8.

Stone: there is no deputization of individuals…

Sotomayor: assume I disagree with that, as you never answered Thomas's question

Sotomayor: you're missing the point

Sotomayor also went after the chilling effect the law has had on abortion clinics.

Sotomayor then jumps in to imply Thomas is wrong, and asks of abortion providers' lawyer: "Am I understanding correctly that you believe that the way this SB8 is structured that what the chilling effect is the very multiplicity of lawsuits that are threatened against you?"

It’s too soon to say what the future holds for Texas’ abortion law. If it stays, the implications for Texans seeking abortions will be enormous. And SB 8 may very well have ripple effects. One of Kagan’s best lines came when the justices were discussing the potential implications of SB 8 on rights other than abortion, such as gun ownership or same-sex marriage. Stone argued Congress could pass protections for these rights, but Kagan wasn’t having it. “Isn’t the point of a right,” she said, “that you don’t have to ask Congress?”