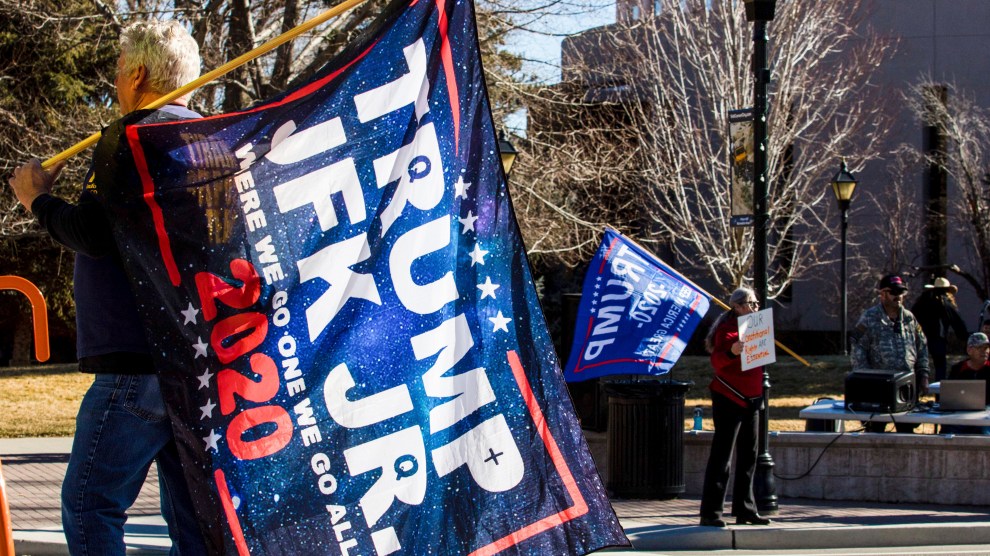 When pictures started circulating in early November of QAnon supporters crowding Dallas’s Dealy Plaza, where John F. Kennedy was assassinated, in anticipation of the second coming of the slain president and the arrival of John F. Kennedy Jr., his dead son, it became a political Twitter joke.

Now, some three weeks later, some middle-aged and boomer QAnon followers are still there, and the incident has more clearly shifted from a laugh to something enduring and darker. While the event’s organizer, Michael Brian Protzman, and his followers have so far only been disruptive, Mother Jones has learned that he has previously faced formal allegations of violence, as documented in a 2019 arrest on an “unlawful imprisonment – domestic violence” charge.

Protzman’s wife told a cop he was “acting differently, not showering…and believing in government conspiracies.”

According to court records from Washington state’s King County obtained and provided to Mother Jones by Amanda Moore, an independent researcher focused on the right, in July 2019, Protzman allegedly “held [his wife] down on the bed, using both of his hands to physically restrain her, using one of his legs to brace hers,” and “held her in this position for approximately two to three minutes until she told him that she would agree to marriage counseling so he would let her up.” When she then tried to leave the house, the documents say, Protzman grabbed her and prevented her from departing. She ultimately made it to a neighbor’s home, barefoot, where she called 911 and said that “she is scared of Michael because he has ‘blind rage’ and she believes he may hit her.” According to a police report, she complained that Protzman had recently “been acting differently, not showering or working and believing in government conspiracies.” She also claimed Protzman had assaulted her before, strangling her roughly six years earlier.

The case was ultimately dismissed without prejudice this past June, meaning that it was closed with the potential to be reopened. Neither Protzman or his wife responded to requests for comment.

Details coming out of Dallas event make the Protzman-led gathering look increasingly concerning. Vice News has described how the event is tearing some families apart. Participants went three weeks ago, abandoning spouses and children; many haven’t come back and won’t say when they will. People have reported that relatives have given $200,000 to Protzman and the group he helped assemble. Known by his followers as Negative48, Protzman recently took part in a livestream where he endorsed another participant’s fatalistic language about experiencing “physical death” to “let go of our ego” and find truth.

What in the fresh hell is he saying…

They all have to go through physical death to let go of the ego to witness the truth?

One relative of someone taking part in the Dallas convening told Vice News that her sister there “is being forced to drink a hydrogen peroxide solution and take ‘bio pellets’ to ward off COVID-19” and complained that calls and messages were being monitored.

Vice has also detailed Protzman’s history of antisemitism. In the past he has denied the holocaust and boosted an obscure conspiratorial film that posits that Jewish people engineered the twentieth century’s world wars.

Protzman’s sect of QAnon is fringe, even by the standards of an already absurd conspiracy theory. The notion that JFK Jr. is alive and has some role to play in the conspiracy was never broadly considered QAnon canon. The account posing as Q never posted about it on 8chan in its infamous “QDrops,” the messages that purportedly contained hints gleaned from a career in government intelligence. Major QAnon influencers have generally dismissed the theory. Regardless, Protzman has built a devoted and concerning following, having spun a false but compelling conspiracy out of another one