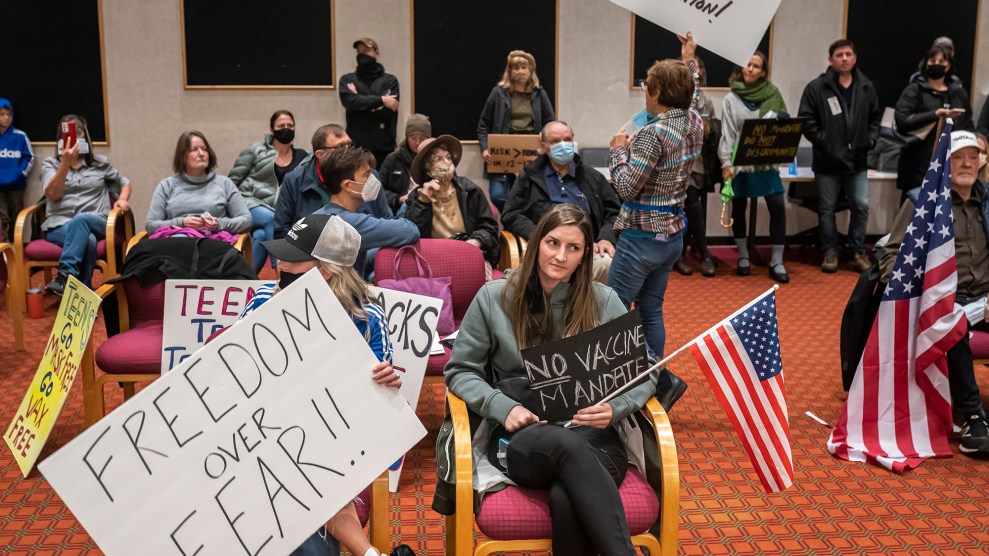 Anti-vaccine-mandate protesters gather during a Portland Public Schools board meeting to discuss a proposed vaccine mandate for students.Nathan Howard/Getty

When Jonathan Kassa first ran for school board in the Philadelphia suburbs of Montgomery County, Pennsylvania, in 2017, his Republican opponent had been a friend, and the two exchanged hugs after their debate. He and four other fellow first-time Democratic candidates shared a $13,000 budget of small donations and ran on a platform promising full-day kindergarten—“not a political issue,” Kassa observes. When the full slate won that November, Democrats controlled the school board for the first time in half a century. They delivered full-day kindergarten the following year.

During that first run, the harshest attacks warned that Kassa and his fellow Democrats would raise taxes and suggested they were puppets of the teachers union. “I laugh about it now,” he recalls with a dark chuckle. “That was idyllic compared to this.” As Kassa sought reelection this fall, a local venture capitalist flooded 60 Pennsylvania school board races, including Kassa’s, with $500,000 to back anti-CRT candidates. Another right-wing political group, Keep Kids in School PAC, unleashed a flurry of attack mailers across the district. Kassa traced the mail meter on another set of anti-Democratic literature down to Jackson, Mississippi. At a campaign event on Sunday, voters called Kassa and other school board members “pedophiles” for the books they allowed to be taught in public schools.

These were the sort of attacks that seem poised to wipe out Kassa and the nascent bench of local Democratic politicians who took office in the aftermath of President Donald Trump’s 2016 victory. But that’s not what happened: The votes are still being counted, but he and the three other Democrats up for reelection seem poised to narrowly hold onto their seats. The same held true for Liz Sheehan, who first ran for school board in nearby Bucks County, Pennsylvania, in 2017. (Kassa’s and Sheehan’s districts are both represented by moderate Republicans in Congress.) She and her three fellow Democratic incumbents vanquished a ticket of write-in candidates who challenged the school board’s masking recommendations. And this wasn’t just in Philadelphia’s swing counties, but in highly contentious recall elections that captured the nation’s attention.

After a year of skirmishes that rose to the level of Saturday Night Live satire, school boards became the surprising high-profile elections to watch. Granted, on Tuesday night, some school board candidates across the country did succeed on their GOP-inspired platforms rejecting both masks and critical race theory—the academic concept, rarely taught in public schools, that focuses on the role that race plays in all aspects of American society. Republicans are guaranteed to embrace that platform going forward, given how Glenn Youngkin’s anti-CRT rhetoric delivered the Virginia governorship to him.

But for all the ways in which that message shaped the winning strategy for Virginia Republicans, many Democratic school board incumbents across the country survived the high-profile, well-funded challenges that gave that strategy shape. The backlash against the CRT and COVID precautions proved to be a potent message for Republicans, but the backlash against that backlash was a powerful motivator for Democratic voters, too.

“There was a desire to do something different because clearly, what Democrats were doing hadn’t worked.”

National politics, of course, are why so many Democrats ran for school board in the first place. Once the pussy hats were knit and the empty-chair town halls were held, the freshly forged Democratic activists—part of the “resistance” that emerged in the wake of Trump’s election—turned their attention to local politics. They volunteered with their local Democratic parties and dipped their toes into municipal elections—running, quite often, for seats on their library and school boards. “There was a desire to do something different because clearly, what Democrats were doing hadn’t worked,” Kassa says of his inspiration to run. Sheehan had worried about what curriculum changes former Education Secretary Betsy DeVos might institute at the federal level and viewed a seat on the school board as a meaningful way to combat any Trump-era mandates.

This year, these resistance-era candidates confronted a new national movement: a culture war against mask and vaccine mandates in public schools, as well as diversity, equity, and inclusion curricula. Sheehan and her Democratic colleagues had been running unopposed until her school board voted in August to recommend masks for the start of school. “It was incredibly contentious,” she recalled of the meetings held after this decision, which often devolved into impromptu protests. After her GOP opponents declared their candidacy, they broadened their platform to “parent choice”—a catchall to describe their anti-mask, anti-vaccine, and anti–critical race theory stance.

Former Gov. Terry McAuliffe, the Virginia Democratic gubernatorial candidate, told the truth about critical race theory: that it had “never been taught” in Virginia’s public schools, and that the fight to ban it was nothing more than “a racist dog whistle.” But doing so may have cost him the election. Amanda Litman, the founder of Run for Something, which helps field first-time Democratic candidates, says this cycle’s slate encountered voters who “don’t share the same set of facts” as Democrats and, as such, telling them they’re wrong is pretty unhelpful. “Our candidates are trying to find a way to talk about the feelings or the anxieties that [CRT] brings up,” she explains. “You can’t try and persuade someone of something that they hold so fundamentally true to who they are as a person.’”

And that was, of course, if candidates felt comfortable approaching those voters at all. Kassa says he was scared not only to knock on doors but also to be in public generally. He worried he’d be confronted by an angry parent at the grocery store or gym. Sheehan says that, unlike her 2017 run, she did much less outreach to Republican voters. “There’s been such a high level of animosity,” Sheehan says, explaining why she passed up mass canvassing for individual outreach to voters who might share her beliefs. She opted for word-of-mouth campaigning and encouraged those voters to pass the word along to other sympathetic ears.

That shift in strategy seemed destined to doom these candidates, especially when coupled with predictions of Democratic volunteer burnout. So how did candidates like Sheehan and Kassa survive screaming parents and hundreds of thousands in opposition spending? Threats to voters’ children, turns out, are a huge motivator not just for anti-CRT sympathizers, but also for Democratic voters and others who rejected the right-wing push. Sheehan’s district nearly eclipsed 2019’s voter turnout in Tuesday’s election, which had been an all-time high for off-year elections. “The school stuff is personal—you can’t mess with people’s kids,” Litman explains.

But Lara Putnam, a professor of history at the University of Pittsburgh who has studied post-Trump grassroots activism, explained the high turnout in grimmer terms—namely, that national polarization has finally hit the lowest levels of government. “Both sides feel like they’re under assault,” she says. “It’s not about this one school board election, but about an opposition party that doesn’t share core values and is a threat to a nation.”

For the time being, Kassa and his fellow school board members can get back to what the pandemic put on hold: a renovation to the district’s dilapidated high school, which has the same boilers and electrical wiring from its 1971 build. But Litman cautions against viewing his and other school board members’ reelection as a reason for complacency. “The goal isn’t ‘destroy thousands of school boards in a year,’” she says of the GOP efforts. “It’s ‘take ’em over in the course of multiple cycles because no one has a long-enough attention span to notice.’”