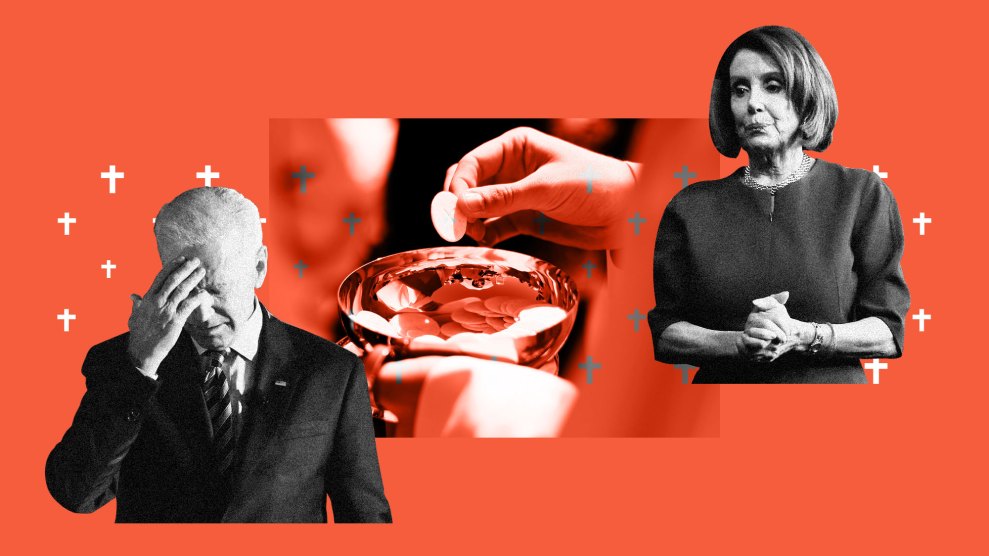 On November 17, 2020, the head of the US Conference of Catholic Bishops (USCCB), Archbishop José Gomez, announced that Joe Biden, who had just been elected president, presented “a difficult and complex situation for the church.” A devout Catholic, Biden nonetheless had expressed support, albeit sometimes lukewarm, for abortion and LGBTQ rights. Therefore, the bishops’ body had decided to form a working group to consider how to deal with a Catholic president at odds with church doctrine.

Two months later, on Inauguration Day, Gomez issued a press release that tempered the USCCB’s traditional congratulations with the claim that Biden had “pledged to pursue certain policies that would advance moral evils and threaten human life and dignity.” Gomez’s press release was met with immediate rebuttals from other high-ranking bishops, one of whom described it on Twitter as “ill-considered” and demonstrative of “internal institutional failures,” as well as a subtle rebuke from Pope Francis, who sent Biden a warm note of congratulations later the same day. It reflected a stark divide in the church and now, with only the second Catholic to become president, the conservatives among the bishops felt compelled to act.

Last week, a year to the day after the USCCB signaled that it would go on the offensive against the nation’s second Catholic president—potentially barring him from receiving the sacrament of communion—Catholic bishops met in Baltimore to determine the final outcome of the year’s debate. But as had become expected by the time they gathered, the meeting produced only a tepid consensus document that satisfied almost no one—considered “simultaneously bland and divisive” by liberals, and “an invitation for disobedience” that was “worse than nothing,” by conservatives.

But if the official proceedings were anticlimactic, they still represented an important showdown of sorts. That is, in terms of the broader civil war engulfing US Catholicism, which has become as bitterly divided as the rest of the country, even as Catholicism seems more prominent in national politics than ever. Catholics occupy the presidency, the House Speaker’s office, two-thirds of the Supreme Court, and the ranks of some of today’s most innovative, and frightening, far-right thinkers.

There was an unprecedented politicization of conservative Catholic clergy, some saying that any Catholic who voted Democratic would go to hell while others threatened to deny communion to Democrats in their parishes.

Throughout the 2020 presidential campaign, the “Catholic vote” emerged as one of the most sought-after swing constituencies. While in reality, US Catholicism is too broad and diverse to qualify as a single voting bloc—pollsters break it down instead by race, ethnicity, and frequency of church attendance—it’s still seen as a reliable predictor of election outcomes, with Catholics voting with the victor in most of the last 10 presidential contests. And so, faced with an opponent who was known as a devout Catholic, Republican attacks shifted from calling Biden a bad Catholic—for his position on social issues—to an anti-Catholic who would usher in a new wave of church persecution. The head of the conservative political group CatholicVote, which shared a staff member with Trump’s Catholic advisory board, accused Democrats of fostering the “climate of hate” that made attacks on church property possible. Meanwhile, there was an unprecedented politicization of conservative Catholic clergy, some saying that any Catholic who voted Democratic would go to hell while others threatened to deny communion to Democrats in their parishes. The far right Catholic media outlet Church Militant warned that under a “Harris-Biden administration, the Chuch would be snuffed out” and necessitate underground churches as in Communist China. Trump himself claimed, during an appearance on the Catholic cable network EWTN, that a Biden administration would “take all of [Catholics’] rights away.”

Once Biden won, many right-wing Catholics shifted their focus and became players in various efforts to overturn the election results. One Texas bishop, Joseph Strickland, refused to acknowledge Biden as the president-elect and addressed a December rally in Washington, DC, that was widely seen as a precursor to the violence on January 6. Another bishop tweeted a call for all Christians to pray “in conjunction with the filing of election-related documents at the Supreme Court.” More esoterically, beginning in November, a Colorado priest in Denver led a months-long series of prayers to “bind” evil spirits that were attempting to steal the election. And on January 6, another priest traveled from Nebraska to perform an exorcism on the US Capitol after watching YouTube videos from a popular Catholic Right author who charged that a demonic spirit was trying to “dissolve” the United States and remake it into something new.

Soon after Biden took office, Gomez’s working group proposed that the USCCB craft a statement on “Eucharistic coherence”—a reaffirmation of Catholic teachings regarding communion that might also serve as a formal response to high-profile Catholics such as the president and Speaker of the House Nancy Pelosi who dissent from church teaching. (In May, Pelosi praised a Vatican letter that she characterized as warning US bishops not to create division with the issue.) Gomez said that in June, the entire bishops’ conference should vote on the question of drafting such a document, even though, in practical terms, the question of whether Biden would actually be denied communion was settled in advance. According to church law, local bishops decide to make that call, and both bishops overseeing President Biden’s church membership, in Washington and Delaware—conspicuously missing from Gomez’s working group—had already declared that they wouldn’t “politicize the eucharist.”

And yet, in the months in between, the political differences in the US Church remained on public display. Liberal Catholic groups who circulated petitions challenging bishops who called for denying Biden communion, were met with counter-petitions created by conservative Catholic groups that had campaigned for Trump. Right-wing media outlets rallied readers to contact their local bishops and urge them to “act in unison to exclude Joe Biden from Holy Communion for his scandalous promotion of abortion.” The Catholic League sent a report to all US bishops identifying 32 times that Biden had allegedly violated Catholic moral teaching since assuming the presidency, including by letting trans people serve in the military and repealing the Mexico City Policy that forbids nonprofit recipients of US funds from talking to clients about abortion.

Writing at the liberal National Catholic Reporter, journalist Christopher White explained that most bishops calling for Biden to be barred from communion had also supported a now-disgraced archbishop’s 2018 demand for the resignation of Pope Francis and that most were connected through the same network of right-wing donors who had brokered ties between bishops and Republican leaders. The Vatican even weighed in, warning that the planned document would divide the US church and suggesting that they wouldn’t approve any proclamations that didn’t achieve consensus support.

Yet when the USCCB met in June to discuss the plan, after a contentious, hours-long debate, the working group’s proposal of denying communion was approved. Progressive and moderate Catholics reacted with alarm, including 60 Catholic congressional Democrats, who released a statement denouncing any moves to “weaponize” the Eucharist.

Through the fall, the sparring continued. Conservative San Francisco Archbishop Salvatore Cordileone launched a public prayer campaign calling on “all Catholics and others of goodwill” to pray for “the conversion” of House Speaker Nancy Pelosi’s “maternal heart.” Los Angeles Archbishop Gomez delivered a polarizing public address at a conference in Spain arguing that “wokeness,” “social justice,” and “intersectionality” were “dangerous” and “atheistic…pseudo-religions” that “have come to fill the space that Christian belief and practice once occupied.” Meanwhile, in Rome, the pope told reporters that he had “never refused the eucharist to anyone,” and later met with both Pelosi and Biden—Biden emerging from his visit with the report that the pope had told him to continue receiving communion.

Archbishop Gomez delivered a polarizing public address at a conference in Spain arguing that “wokeness,” “social justice,” and “intersectionality” were “dangerous” and “atheistic” pseudo-religions that “have come to fill the space that Christian belief and practice once occupied.”

And yet, by the time a working version of the bishops’ guidance document was leaked in early November, it said almost nothing about the “scandal” of pro-choice politicians, and some conservative bishops scrambled to suggest they’d never sought to deny prominent Democrats communion, but merely to educate the laity about church teachings.

Finally last week, the bishops met again, in Baltimore, to vote on the document they’d created, “The Mystery of the Eucharist in the Life of the Church.” In the end, the final document makes only oblique reference to Catholic politicians and mentions none by name. In the final document, most of the ire of the preceding year boiled down to one heavily-workshopped sentence: “Lay people who exercise some form of public authority have a special responsibility to form their consciences in accord with the Church’s faith and the moral law, and to serve the human family by upholding human life and dignity.”

The anodyne nature of the ultimate document—and the reasons it was created in the first place—drew protests on both sides. Progressive Catholic groups, including Catholics for Choice, held an event outside the Baltimore hotel where the bishops were meeting, calling on bishops to not politicize church sacraments. A group of 200 anti-abortion activists held a “Men’s March” from a Baltimore Planned Parenthood to the same hotel, demanding the bishops refuse communion to those “obstinately persevering in manifest grave sin.” And Church Militant, which regularly issues blistering condemnations of the pope and church hierarchy, held a rally on a pier overlooking the hotel, leading hundreds of supporters to chant slogans in the bishops’ direction: “Shame on You,” “Lock Them Up.”

Writing at the National Catholic Reporter on the eve of the conference, journalist Michael Sean Winters predicted that, “even the bishops who think it was a mistake to draft a document on the Eucharist in the first place, and many of those who think the draft is lousy, may end up voting for the text just to put the issue behind them.”

But little optimism seemed to greet this underwhelming resolution. And the results of a poll of US priests conducted by the academic journal Public Discourse, released this month, seemed to reveal more clearly that fissures within the leadership of the US Catholic church mirrored those in society at large. On the whole, it found that the priesthood is becoming more conservative; that younger priests are most stridently opposed to the politics of their pope; and that clerics on both sides of the political spectrum believe things are getting worse, not better, in the US church