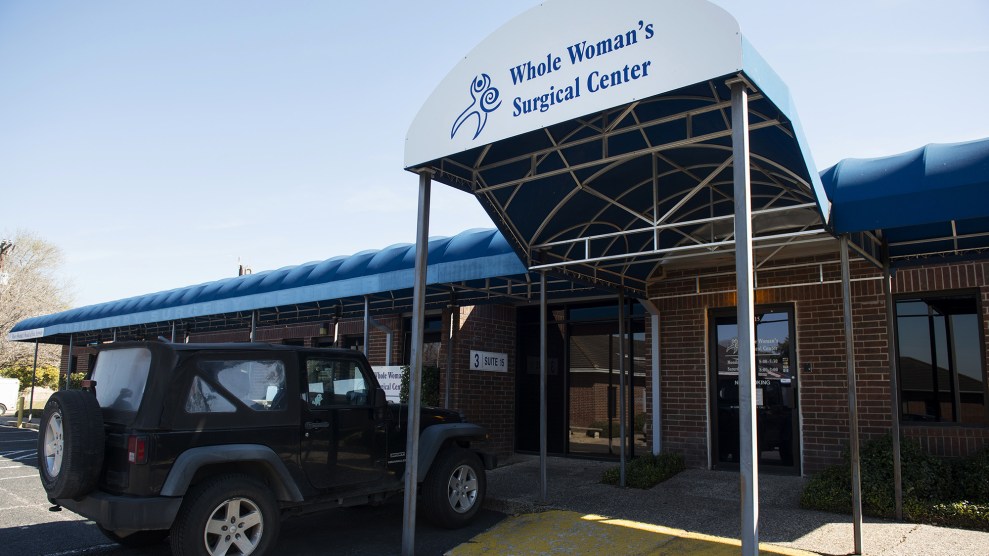 After months of punting, and repeated insistence for action from the Department of Justice, today the Supreme Court will hear oral arguments challenging and defending Texas’ new abortion law. The court will address it through a pair of cases—Whole Woman’s Health v. Jackson and United States v. Texas.

Senate Bill 8, which went into effect in September, bans abortion before six weeks (or before flickers of cardiac activity can be detected). It also allows any private citizen to sue both abortion providers and anyone who “aids and abets” patients trying to obtain an abortion. The first suit against a provider has already been filed in Arkansas by “a disbarred and disgraced former Arkansas lawyer”—the plaintiff’s own words—who is currently on house arrest because he was convicted on tax fraud and conspiracy charges.

It’s easy for outsiders to lose sight of the issue at hand in all the legal hubbub, but the fact is that this is a law that is causing very real harm to pregnant Texans, who are now being forced to seek care out of state or on the internet. I have spent the past couple months reporting out of reproductive health clinics for a book project I’m working on, and I’ve seen Texans seeking care in Alabama, Kansas, and Tennessee. The one that sticks with me was a young woman who came to Huntsville, Ala. after traveling to Jackson, Miss., where she was told she was barely over that clinic’s gestational limit. She had been traveling for almost a week and was exhausted. She told me it was only the second time in her life that she had ever left Texas.

“The day after SB 8 went into effect, we had a caller who had to travel 15 hours overnight [by car] to Wichita, Kansas—she was seven weeks pregnant.”

Zaena Zamora, executive director of the Frontera Fund, a nonprofit that works to help pregnant people in deep southern Texas to get abortion care, was unsurprised by this anecdote. “The day after SB 8 went into effect, we had a caller who had to travel 15 hours overnight [by car] to Wichita, Kansas—she was seven weeks pregnant,” Zamora says. She is seeing unprecedented demand for help with travel and logistics. She told me that the group spent more on travel support just in the month of October than it did in the entire year of 2020.

Zamora said that the barriers facing Texans who live in the Rio Grande Valley, a region of the state that is close to the border, are especially great. “We’re the furthest away from any state border,” she says. “Typically, the people that we help have to travel the furthest than any other person would typically have to travel in Texas…we’re looking at 12-plus hours to get to your appointment.” Many of the people the fund seeks to help don’t have paid time off, and that’s just the beginning—there’s childcare to consider, along with money for food, lodging, transportation. Sometimes the support of the fund isn’t enough.

For undocumented Texans, there are even more hurdles. They cannot, of course, cross the border into Mexico, because it is unlikely they would be able to return to their homes and their families in the United States. They also risk exposure and deportation traveling north to seek care, because they have to cross through northern Border Patrol checkpoints that are set up throughout the state.

As I wrote in September, the Texas law is only the beginning, and all eyes are on the Supreme Court to see whether it will set precedent for other anti-abortion legislatures to follow Texas’ lead. To be sure, when one state loses access to abortion care, it affects the surrounding states deeply.

This is uncharted ground,” says Robin Marty, director of operations at the West Alabama Women’s Center and author of the Handbook for a Post-Roe America. Now, the clinic is preparing for an influx of patients from eastern Texas and from Louisiana, where clinics have experienced interrupted services due to the hurricane. Marty tells Mother Jones that at least two of the three clinics in Louisiana are not open this week. “That’s how it is right now. We in Alabama are getting Louisiana patients calling currently and that’s before we have to deal with the overflow of Texas patients.”

Still, if the court rules in favor of abortion rights advocates, Texas is still Texas, a state deeply restrictive of abortion. In 2015, another law that was ultimately taken up by the Supreme Court, House Bill 2, shuttered half the clinics in the state. Though the court overturned the law on the grounds that it caused an “undue burden” for pregnant people who wished to exercise their constitutional right to abortion, the vast majority of those clinics were never able to reopen.