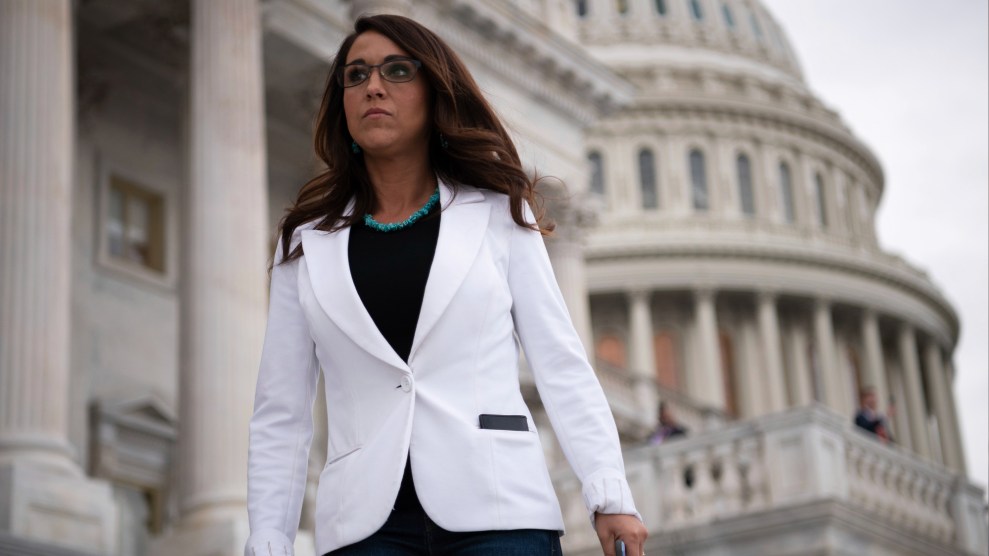 A video of Rep. Lauren Boebert (R-Colo.) effectively describing her colleague Rep. Ilhan Omar (D-Minn.) as a terrorist went viral over Thanksgiving weekend. In the obviously false tale, she tells a story of being in an elevator with Omar when a Capitol police officer hurried to get in with them. “I look to my left, and there she is, Ilhan Omar,” Boebert quipped. “I said, ‘Well she doesn’t have a backpack, we should be fine.’”

Naturally, it didn’t stop there. The following day, Boebert issued a non-apology and said she would speak with Omar over the phone. That call took place on Monday after the Thanksgiving holiday, and did Boebert express any regret for what she had done? Quite the reverse. Boebert demanded that Omar apologize for “anti-American, anti-Semitic, anti-police rhetoric.”

In response, Omar hung up the phone. On Tuesday, CNN posted another video of Boebert making similarly bigoted comments at a conservative dinner party in Staten Island, New York, in September. The event had been written up on SILive.com, a local outlet but received little attention. Following that story, threatening voicemails began pouring into Omar’s office.

“There’s plenty that would love the opportunity to take you off the face of the fucking earth,” one unidentified caller said. “We know what you are, you’re a fucking traitor. You will not live much longer bitch. I can guarantee that.”

Is it possible to reduce Boebert’s wildly irresponsible and racist remarks and Omar’s reasonable responses as just another face-off between two political opponents? After all, the country has never been more polarized, as the pundits like to say. But a handy reminder for the holiday season: This isn’t about differences of opinion or political views. This behavior by elected officials becomes a matter of life and death. How much longer can we let people like Boebert and her merry band of unhinged racists spew hate from the second branch of government before a member of Congress gets hurt? And where is Republican so-called leadership in addressing this problem?

“This is not about one hateful statement or one politician,” Omar said in a statement earlier this week. “It is about a party that has mainstreamed bigotry and hatred. It is time for Republican Leader [Kevin] McCarthy to actually hold his party accountable.”

Boebert has been trying to approach the dizzying heights of Rep. Marjorie Taylor Greene’s (R-Ga.) infamy since she was elected to serve the people of Colorado’s Third District last November. She received criticism (and ridicule) when she released a video of her walking around downtown Washington, DC, packing heat. DC’s attempts at stricter gun laws have been thwarted by Congress.

After the January 6 insurrection, accusations swirled that Boebert aided some of the organizers. But while the representative from Colorado was trying to brand herself as Your Conservative Facebook Aunt On Steroids, Greene, her colleague from Georgia, was stealing the spotlight with some truly demented behavior, such as claiming mass shootings are false flag events and denying a plane crashed into the Pentagon during the 9/11 terrorist attacks.

Until now, it seems as if at last Boebert has found her sweet spot in leaning heavily into post- 9/11 racist stereotypes about Muslims. And it’s not hysteria or some kind of partisan posturing to declare that Boebert’s actions will lead to violence. Her sentiments and the threats against Omar are happening during a period where it seems as if death, misery, and suffering are what constitute the priorities of the conservative agenda.

Boebert’s sentiments and the threats against Omar are happening during a period where it seems as if death, misery, and suffering are what constitute the priorities of the conservative agenda.

In the midst of a pandemic that has killed more than 780,000 people in the United States, Republicans are pulling out all the stops to hinder the vaccination campaign and public health restrictions designed to save lives, like challenging the federal government’s vaccine mandate for health workers in court.

Then there’s Kyle Rittenhouse, who was acquitted of the murder of two Black Lives Matter protesters in Kenosha, Wisconsin, and is now a hero in certain GOP circles. In 2020, when Rittenhouse was 17, he traveled from his home in Antioch, Illinois, to “protect businesses” from demonstrators in Kenosha. Protesters had taken to the streets after police shot Jacob Blake seven times, paralyzing him. Rittenhouse’s lawyer said he was acting in self-defense when he shot three people, killing two, and the jury was convinced this was the case. After he was acquitted, two of the most egregious Republican members of Congress, Reps. Paul Gosar (R-Ariz.) and Matt Gaetz (R-Fl.), who both have their own histories of injudicious remarks, tweeted about arm wrestling to determine who gets the 18-year-old on their staff.

The sad, sorry fact is that there is no incentive to correct their behavior. Rep. Alexandria Ocasio-Cortez (D-N.Y.) who has also been the victim of excessive death threats, called for Boebert to face consequences for actions, such as losing her committee assignments. That’s what happened last month to Gosar after he tweeted an anime meme that depicted the Arizona congressman killing Ocasio-Cortez. But it’s unclear if any punishment would be sufficiently meaningful to force the Republicans to stop threatening their Democratic colleagues.

After videos surfaced of Greene harassing the surviving victims of the Parkland shooting, commenting about killing Democrats, and endorsing anti-Semitic conspiracy theories, she was removed from her committee assignments. McCarthy, assuming they will handily win reelection, has already said if the GOP wins back the House next year, Gosar and Greene will be able to serve on committees once again. But her removal only seems to have freed her up to do more terrible things. Now, instead of legislating (if anyone is even doing any of that) Greene spends her time trolling on Twitter; she most recently got into a spat with fellow Republican Nancy Mace (R-S.C.), who condemned Boebert’s comments about Omar. Greene referred to Mace as “trash” for supporting a rape exception in an anti-abortion bill. (Mace was raped as a teenager). McCarthy told CNN he had a simple message for Mace and Greene: “Stop it.” How could that not be persuasive?

Obviously, the real problem isn’t just polarization and political disagreements, it’s that one of the major parties has wholeheartedly embraced hatred and racial grievance. They’re not even pretending to legislate or advocate for policies that can improve the lives of their constituents.

The extremely bitter pill to swallow is that none of this matters, at least for now. This kind of behavior in the so-called sacred halls of Congress is the end result of a not-insignificant portion of the electorate simply not caring that their representatives aren’t trying to make their lives better. Republicans wouldn’t be able to behave so grotesquely without approval from the people who put them in office.

This cherished Republican base made a cameo appearance in the latest video of Boebert referring to Omar as a terrorist at that dinner in Staten Island. There they were, perhaps some of the same ones who made sure to show up for Trump’s rallies in the past, hooting and hollering in agreement as Boebert spewed her racist, dangerous, rants. These politicians and their constituents were emboldened by Trump, but it was naive to imagine they would calm down once he left office.

At the September event, Boebert’s favorite anecdote changes. This time she’s in an elevator with a staffer when Omar joins them. “It was just us three in there and I looked over,” she tells the crowd, “and I said, well, lookie there, it’s the Jihad Squad.” The attendees were cheering and laughing before she even got to the punchline.