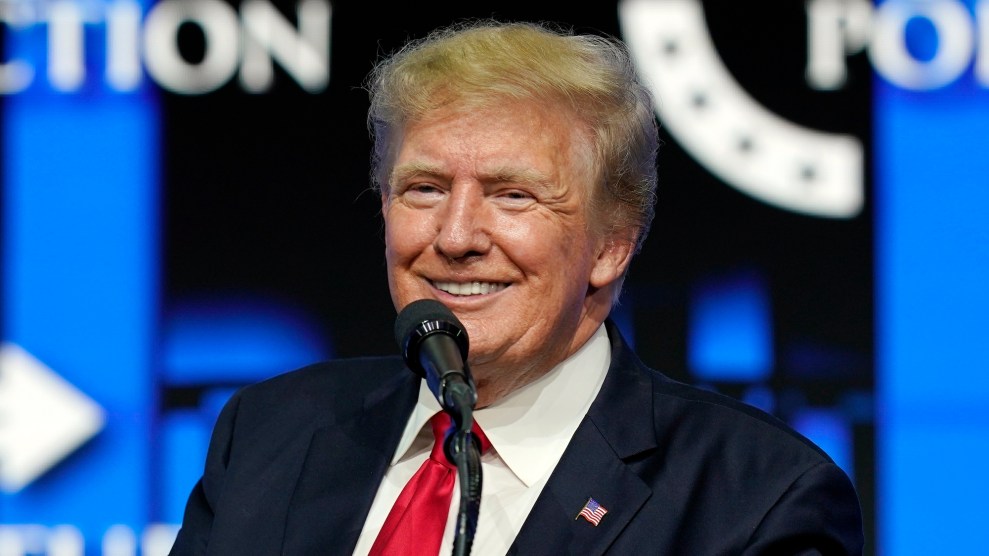 Former President Donald Trump’s media company scored a coup over the weekend, announcing it had landed $1 billion in investment. But the public might never know who has funded Trump’s media dreams, creating a potential conflict of interest on a colossal scale. And even before the deal was announced, the company, which has already missed one deadline to unveil a beta product, appears to have come under scrutiny from regulators over its funding practices.

Earlier this fall, Trump announced a plan to create a sprawling media empire, dubbed the Trump Media & Technology Group, that would take advantage of a relatively new Wall Street innovation: a special purpose acquisition company, or SPAC. A SPAC is a company that goes public without having an actual business—an empty shell of a corporation. After launching, it searches for a partner company that does have a purpose and then merges with it. Wall Street investors, whether they are big institutional players or regular people, can buy into the stock. Then, before the final merger, a group of more traditional investors, like banks or big Wall Street firms, pour in a large chunk of cash known as a “private investment in public equity,” or PIPE.

“This PIPE is structured so that the identity of the PIPE investors may not be known for a long time, if ever.”

That’s potentially ideal for someone in Trump’s position—with his long history of bankruptcies, fights with lenders, and increasingly toxic brand, few traditional funders might be willing to stake Trump the money to launch a project as ambitious as the Trump Media & Technology Group, which, according to pitches sent to investors, aimed to quickly start a MAGA-friendly alternative to Twitter and Facebook and then roll out streaming entertainment and news options to undermine Netflix and the cable news giants. For good measure, investors were also told a plan was in the works to develop a web-hosting company to compete with Amazon. Each part of the project would be an extremely challenging and expensive undertaking, especially for Trump, who recently fell off the Fortune 500 list and might otherwise lack the resources to undertake such a massive project. A SPAC—which would give him access to the stock market without having to partner with a big bank for an initial public offering—could be perfect for Trump’s plans.

Over the weekend, the organizers of Digital World Acquisition Corp., the SPAC that Trump has proposed merging his nascent media company with, announced that it had secured $1 billion in PIPE funding. That’s on top of money raised over the fall from a first round of investors that included hedge funds and a DWAC share price that rocketed from $9.96 to $94, before settling back into the mid-$40-range more recently and then once again spiking above $65 this week.

That’s a huge influx of cash for Trump’s plans, but it’s also one that leads to a familiar issue for Trump, especially if he has designs on serving a second term in office: There is no transparency whatsoever into who exactly is putting up that $1 billion. Over the four years of his presidency, Trump was deeply in debt to a number of banks, including Germany’s Deutsche Bank, which was an unprecedented situation for a US president. If the PIPE funders remain anonymous and Trump retakes the White House in 2024, the country would once again face the possibility that a president is relying on deep-pocketed outside interests who hold a great deal of power over his business—but this time the sums would be much larger, and the funders completely anonymous.

It’s one of several strange things about Trump’s SPAC deal.

Usha Rodrigues, who teaches corporate finance and securities law at the University of Georgia, says that typically when PIPE funding comes in, it is very clear who the funders are. In fact, that’s often the whole point, since it tends to represent money coming from well-regarded sources with reputations for wise investing. Unlike the initial round of funding from hedge funds, which may be opportunistic and uninterested in the actual long-term business plan of the SPAC, or the investors who snapped up the stock after it went public, the PIPE investors are seen as a stamp of institutional approval.

“The theory is that the PIPE investment serves as a validation of the deal, because a sophisticated investor or investors have looked under the hood of the proposed acquisition target and decided to invest,” she says.

Usually, the PIPE investment is announced around the same time as the news about the company the SPAC is going to merge with—but Rodrigues says it wasn’t in this case, which was a surprise. Not only was a big PIPE investment not announced when the partnership with Trump was revealed, now that it has been announced, the names of the investors have not been made public. That’s because each investor has been limited to controlling no more than 4.99 percent of the voting stock, just under the Securities and Exchange Commission’s threshold requiring anyone controlling 5 percent or more to be identified publicly in filings.

“This PIPE is structured so that the identity of the PIPE investors may not be known for a long time, if ever,” Rodrigues says.

While the public and general shareholders don’t know who the PIPE investors are, Trump apparently does. In fact, Reuters reported last week that Trump has been personally calling certain potential PIPE investors, trying to get them to commit to a $100 million investment, which heightens a potential for a conflict of interest—only Trump would know what other interests he might have to serve.

“Are they individuals or companies or countries that have a stake in something that he could affect as president?” Kathleen Clark, a professor of legal ethics at Washington University in St. Louis says. “Yes, of course they are, whoever they are, but I think the bigger question right now, is: Will we ever know their identities?”

If the reason for keeping the PIPE investors names anonymous isn’t for a particular business purpose, it raises a lot of questions, Clark says.

“In a sense, that’s consistent with Trump’s past practice—his refusal to disclose customers of the hotels and clubs,” she says. “And it raises the question of whether this is an arrangement motivated by normal business concerns or by future improper influence concerns.”

That, however is a long-term issue. In the short-term, Trump’s SPAC plans face a more immediate problem. In the same SEC filing in which DWAC’s organizers announced their spectacular $1 billion in PIPE funding, they also disclosed some less happy news—mainly that the SEC and the Financial Industry Regulatory Authority (FINRA) are probing the company’s first round of funding that came largely from hedge funds. In theory, this round came well before DWAC’s organizers ever conceived of a partnership with Trump to create a huge publicly traded media business to challenge the likes of Facebook and Netflix.

In fact, that’s the whole point of a SPAC. When a normal company goes public, it has a purpose—a business plan or a product—and investors get to look at the business and decide whether it’s something worth buying. But that’s a long arduous process that involves quite a bit of scrutiny. A SPAC, on the other hand, is a publicly traded company that can be launched quickly and easily into the market, where it will eventually find a business to acquire—but it’s not allowed to have a preexisting plan to merge with a specific company. In October, however, the New York Times reported that Patrick Orlando, the CEO of DWAC, had met with representatives of Trump about his proposed media idea as far back as April—despite the fact that DWAC did not go public until Sept. 3. Representatives of TMTG told the Times that the conversations were about a potential partnership between Trump and another SPAC that Orlando also was the CEO of, and were not related to DWAC’s involvement with Trump. Representatives from DWAC and Trump Media did not respond to requests for comment from Mother Jones.

Not everyone is convinced—Sen. Elizabeth Warren, for instance, has called for an investigation, and apparently the SEC and FINRA are taking a look. According to the disclosure filed over the weekend by DWAC, the two regulators are asking questions about meetings between company officials and Trump Media representatives, as well as the identity of early investors. While publicly traded companies are required to disclose all sorts of potential risks—even some that seem fairly remote—Rodrigues says that a note reporting scrutiny from regulators is not normal.

“This is out of the ordinary,” she says. “It’s not good anytime that the regulators are asking questions.”

The development is potentially problematic for Trump’s media conglomerate dreams because the merger between DWAC, with its high stock price and $1 billion in PIPE funding, and the Trump Media & Technology Group hasn’t actually been consummated yet. It needs SEC approval, Rodrigues says.

“There’s a clock ticking, because they want to get this deal done and the SEC has to approve certain filings before it can go forward,” she says. “There will be a lot of pressure on the company to resolve it before the merger concludes.”

If it did turn out that Trump Media representatives were talking with DWAC officials before the deal was publicly announced, that would be no small matter, Rodrigues adds.

“The whole premise of a SPAC is supposed to be that it’s not a preordained conclusion,” Rodrigues says. “The sponsors go out and hunt for a target. And if before they start they already have a company in mind, not only are they misleading the public when they say there haven’t been any prior conversations, but it also makes it seem more like an inside deal.”