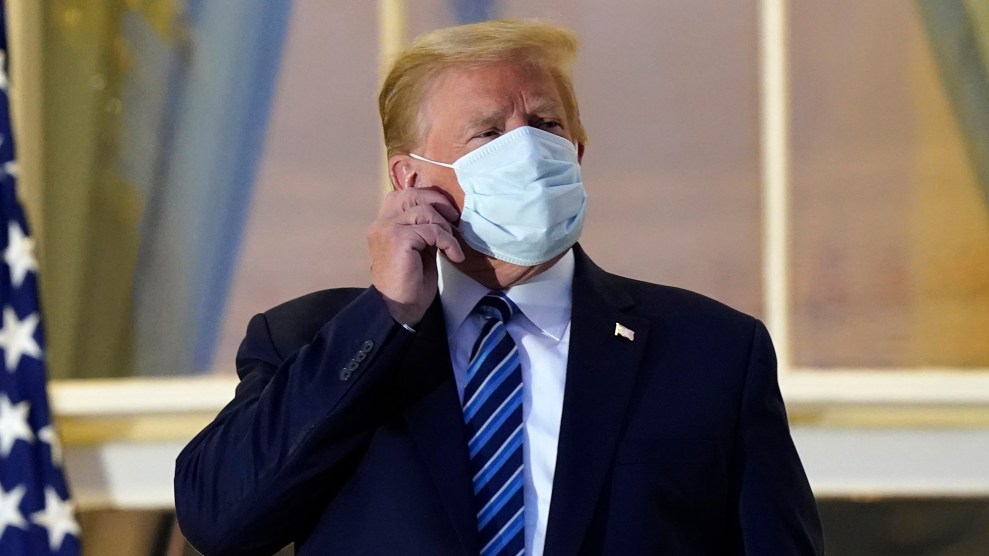 Franz Kafka would be proud of this mess. Yesterday, my colleague Noah Kim wrote about what appeared to be a stunning confession: Donald Trump received a positive COVID-19 test before his first debate with Joe Biden, last September. Relying on a pre-release copy of a book by Mark Meadows, Trump’s former chief of staff, the Guardian reported that the positive result, three days before the event, was followed by a negative result from a different test, but Trump pressed on, regardless.

What a hero! seems to be Meadows’ moral of the story—never mind the fact that Trump could have infected countless people, including his 77-year-old opponent. At any rate, Trump was indeed soon terribly ill with COVID-19. When exactly Trump began to test positive—who knew what and when?—has been the subject of intense scrutiny ever since. The timeline outlined in Meadows’ book, The Chief’s Chief, was confirmed by two additional officials to Maggie Haberman, at the New York Times, and three to the Washington Post.

In response, Trump called the account “fake news.” And he was furious at his former underling, according to reporting by the Post. Meadows is in trouble, and a very Trumpian fog has been cast across the whole story.

Time to hose this story down with mud, thought Meadows: He went on Newsmax last night to agree with Trump: Yup, my own book is fake news. Meadows describes the first test Trump took, pre-debate, as a “false positive;” two subsequent tests, he added, were negative, showing Trump didn’t have COVID before the debate. Still with me?

Newsmax is the definition of friendly territory for all manner of Trumpians. The hosts themselves are typically diehard MAGA. But even the anchor Rob Schmitt asks the obvious follow up question: “The timing is interesting, though, you have to admit. I mean, wasn’t it just a week later they choppered him to Walter Reed and he was very sick?”

Meadows performed that pivot right from the suck-up playbook, and immediately praised his former boss: “There’s a lot of great stories in the book that candidly talk about the miraculous work, the historic work, that Donald Trump did,” he said, with a hint of panic familiar to a disciplined child. “I think most of your readers will find it a very enjoyable read.”

This has all predictably set off a bunch of questions. The Washington Post’s Dan Diamond has a great summary of the new concerns, which focus on what kind of tests Trump did and when, and whether or not Team Trump stuck to protocol by following a positive rapid test result a more accurate confirmatory PCR test, or simply another rapid. And, did they retest the same swab on a new kit? Without the book in hand, right now we’re relying on details from the Guardian, and from Meadows himself.

3) From Meadows’ description and the Guardian’s summary, it sounds like Trump was tested with an unnamed rapid test — and after his positive result, that same sample was rerun, somewhat later, through another antigen test.

This is not the way to do accurate coronavirus testing. pic.twitter.com/fkDlJtSOZd

Our work Slack chat immediately lit up with questions of our own, including (and I quote):

As my colleague Kiera Butler points out, “It’s obvious that something was fishy, but we will almost certainly never know exactly what happened.” But we will certainly keep you abreast of all the developments we learn along the way.