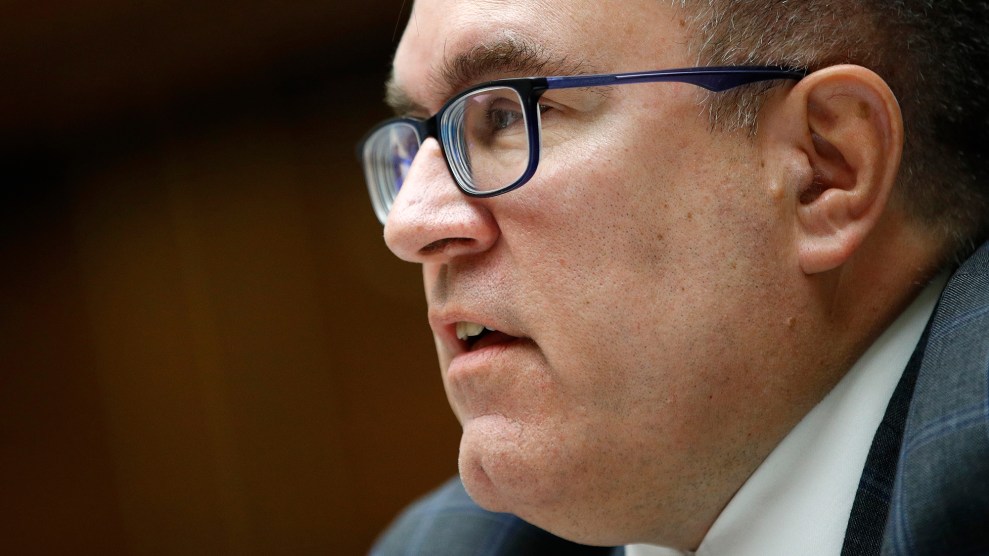 Earlier this month, Virginia Gov. Glenn Youngkin (R) announced Wheeler as his pick to serve as secretary of natural resources. The choice outraged state Democrats and environmental groups, who described Wheeler as “the absolute worst pick” for the post.

​​AFGE Council 238, a union that represents more than 7,500 EPA employees nationwide, has joined the effort to block Wheeler’s nomination. In a letter to Virginia state senators on Thursday, Marie Owens Powell, the union’s president and a longtime EPA employee, wrote that Wheeler “destroyed or weakened dozens of environmental safeguards at EPA, with the sole intention of bolstering polluting industries’ profit margins.”

They warned that Virginia could expect the same of him.

“There are few who understand more acutely the threat Mr. Wheeler poses to [the Virginia Department of Natural and Historic Resources] and the natural environment that Virginians cherish than those of us who saw first-hand the impact of Mr. Wheeler’s misguided leadership at the EPA,” the letter reads.

Public backlash to Youngkin’s nominee sets the stage for what is likely to be a contentious confirmation process. Democrats maintain a 21-19 majority in Virginia’s Senate. As The Hill reported, two key moderate Democrats have signaled that they are unlikely to support Wheeler for the job.

Wheeler served as the EPA’s deputy administrator before taking over for his scandal-plagued predecessor, Scott Pruitt, in 2019. Wheeler helped spearhead the Trump administration’s industry-friendly agenda, dismantling numerous pollution rules and other clean air and water safeguards to the benefit of the extractive industries that he once represented as a lobbyist. Along the way, he repeatedly downplayed the threat of global climate change and sidelined scientific advisory committees.

Owens Powell, who has been with the EPA for nearly three decades and works as an underground storage tank inspector in its Philadelphia office, said the work environment at the federal agency during Wheeler’s tenure was “extremely hostile.”

“The simple rejection of scientific principles was just so demoralizing to our staff,” she said.

During Wheeler’s tenure, the EPA scrubbed climate change language from the agency’s website. And Wheeler questioned the results of a sobering federal climate assessment, saying some of its findings were “based on the worst-case scenario.”

Owens Powell was surprised that Youngkin tapped Wheeler for the job given what she felt was a clear and well-documented record at the EPA. If he’s confirmed, she fears he will not only cause similar damage in Virginia, but negatively impact the EPA’s ability to collaborate with the state agency, ultimately making it more difficult to confront climate change and other environmental threats.

“I couldn’t imagine that anyone would have thought he would be a good idea for this position.”

“I couldn’t imagine that anyone would have thought he would be a good idea for this position,” she told HuffPost by phone. “It’s ​​AFGE Council 238’s sincere hope that someone in a position of authority will stand up for sound science and the enforcement of corresponding environmental laws and reject this nomination.”

Youngkin’s office did not respond to specific questions Thursday, instead referring HuffPost to an interview the governor did with WTVR-TV in Richmond last week in which he called Wheeler “the most qualified person for this job.”

A former private equity executive, Youngkin is the first Republican governor of Virginia since 2009. One of his first actions after being sworn in Jan. 15 was to sign an executive order aimed at withdrawing Virginia from the Regional Greenhouse Gas Initiative, a program that several states joined to slash greenhouse gas emissions from the power sector.

It’s a move that Wheeler, who defended Trump’s decision to withdraw the U.S. from the historic Paris climate agreement, would no doubt approve of, and one Owens Powell suspects Wheeler’s fingerprints are on. Wheeler was a member of Youngkin’s transition team.

The EPA union’s letter comes less than a week after more than 150 former EPA staffers urged Virginia state lawmakers to vote down Wheeler’s nomination. In their own letter, the group said the Trump official “sidelined science” at the EPA and “pursued an extremist approach, methodically weakening EPA’s ability to protect public health and the environment, instead favoring polluters.”

Sharon Bethune is a Virginia resident, longtime former EPA employee and past vice president for civil rights at AFGE Local 3331. She shares her former colleagues’ concerns. She told HuffPost that during Trump’s term, morale at the EPA was shot, and the “destruction” Wheeler caused factored into her decision to retire in 2019 after nearly four decades at the agency.

“I’m thinking about the fact that my grandchildren may not be able to benefit from some of the things I benefit from, all because we put the wrong man in office.”