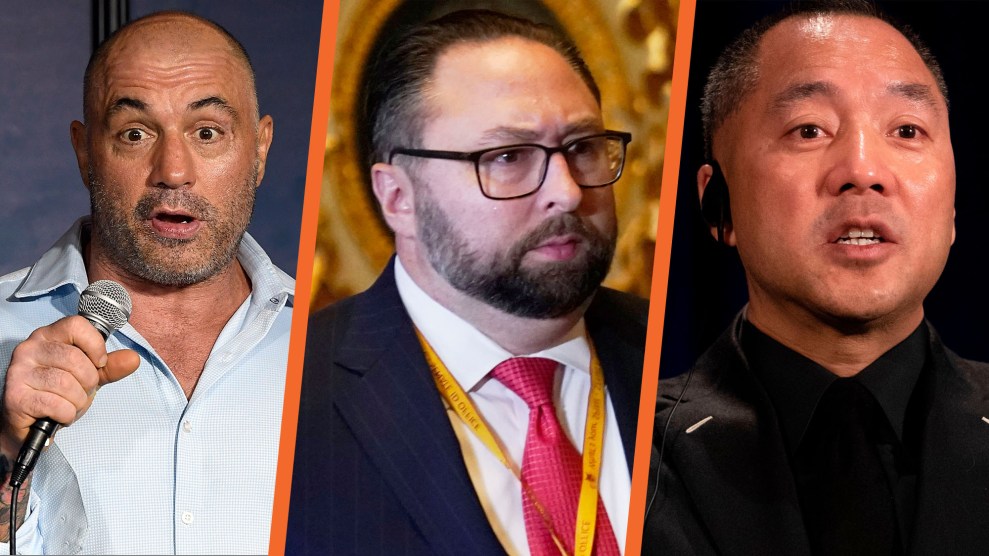 Last week, Gettr, the social media site that sells itself as a MAGA alternative to Twitter, entered damage control mode. The hugely popular podcaster Joe Rogan, who days earlier had signed up for the app, was publicly blasting Gettr as “fuckery” and “fugazi” and accusing the startup of artificially boosting his follower count by adding his massive Twitter following of 8 million to his much smaller audience on Gettr. Rogan was essentially saying Gettr was juicing the numbers and claiming millions of users it didn’t have.

An attack from Rogan, the host of the biggest podcast in the country who is popular on the right, was a big problem for a social media firm that is only six months old and targets conservatives as its consumer base. As he dealt with the fallout, Jason Miller, the former Trump campaign spokesperson who is the company’s CEO, traded messages with Guo Wengui, the controversial fugitive Chinese billionaire and ally of Steve Bannon, whose company created an early version of Gettr. Miller and Gettr have repeatedly asserted that Guo does not play an active role in the company’s operations. But these messages—which were obtained by Mother Jones—show Guo dispensing advice (arguably instructions) to Miller and suggest he is more involved than the company has acknowledged.

“Yeah, it’s not good,” Miller said in a WhatsApp text message to Guo, noting that he had recently spoken to Rogan’s producer in an effort to smooth things over. “…[H]opefully we won’t have anymore outbursts.”

“We don’t want to do any bad things to this guy [Rogan],” Guo, who speaks slightly fractured English, responded in an audio message. “We need to respect him. Just…explain to him what happened.”

“Keep it gentleman-style,” Guo stressed. “No fight back. We are friends. We need to respect him.”

“Exactly,” Miller replied by text. “I was very humble when I spoke with his producer yesterday.”

“That’s why I love you. You’re a 100 percent gentlemen,” Guo responded in another audio message. Guo added, seemingly jokingly, that he himself was a “fake gentleman.”

Guo appears to have communicated one-on-one with Miller, then forwarded the exchange to a group of around 20 associates according to a person who shared the messages with Mother Jones. To this group, Guo provided a description of what he had discussed with Miller. “Regarding Joe Rogan, last night, we discussed with Jason to display the number of followers separately: GETTR followers and total followers,” Guo wrote in the WhatsApp chat that originally appeared in Chinese. “The web version has been launched, and the mobile version is also being submitted. After all the changes are made, Jason should respond to this issue. An announcement to explain.”

Guo, who became a vocal critic of the Chinese Communist Party after fleeing to the US in 2015, heads a constellation of commercial and nonprofit entities that he and Bannon describe as a “whistleblower movement” battling Chinese government corruption. This network includes media properties that traffic in disinformation and conspiracy theories, including the baseless claims that election fraud cheated Donald Trump of the 2020 election and that Covid is a Chinese bioweapon. Guo’s prolific social media presence and attacks on the Chinese Communist Party have won him thousands of fiercely loyal adherents among the international Chinese diaspora, and he often gives instructions to supporters and employees through WhatsApp audio messages and group texts, according to people who have previously worked with him.

Gettr is based on a nearly identical social media application that Guo first developed called Getter (and before that Getome). Getter was hosted on Guo’s streaming video site, GTV, before it was launched as a new corporate entity in July with Miller at the helm. At the time, GTV was under federal scrutiny for holding an unregistered offering of its stock and faced a cascade of lawsuits from investors who alleged they had been defrauded. GTV and other firms tied to Guo were later fined more than $500 million by the Securities and Exchange Commission. (The Chinese government, which has sought Guo’s extradition, has also charged him with various corruption-related crimes. Guo has denied wrongdoing and said the charges are politically motivated.)

From the start, Miller claimed that Guo had little involvement with Gettr, telling the Daily Beast that Guo had no formal role, had not contributed any money, and was not part of the day-to-day operations. Miller later told the Wall Street Journal that Gettr’s investors included “the Guo family foundation,” but he claimed that Guo did not have a direct financial stake nor a direct role in in the business. He told the New Yorker in a story that appeared on January 11 that Guo “does not have a direct personal financial stake” in the social media company.

Yet their WhatsApp exchange last week suggests a deeper level of participation by Guo in the company’s affairs. Additionally, a legal document obtained by Mother Jones indicates a tight connection between Guo and Gettr. The social media app has said it is headquartered at 3 Columbus Circle in New York, but according to the document, the paychecks for Gettr employees bear a different address: 162 East 64th Street, an Upper East Side building that houses Guo’s commercial and nonprofit ventures. That is also the address of what Guo calls the “Himalaya Embassy” of the New Federal State of China, the supposed government-in-waiting dedicated to the CCP’s overthrow that Guo and Bannon launched in 2020.

Miller didn’t respond directly when asked whether the WhatsApp exchange and Gettr’s payroll address contradict his past statements about Guo’s role in the company. But he said in a text message that Guo was just one of many people offering him guidance about Rogan.

“I received suggestions from several dozen people that day, ranging from policy guidance to chewing me out,” Miller said. “Pointing out that we need to better communicate with some of our high-profile users isn’t exactly inside baseball.”

Guo did not respond to a request for comment.

Rogan had initially told his followers to “Rejoice!” when he joined Gettr on January 2. And Gettr touted his presence there, claiming it had brought a surge in new users. But actually using Gettr appeared to frustrate Rogan, who lambasted the app and questioned its metrics in a January 10 appearance on a podcast hosted by comedian Tim Dillon.

“You have like 9 million followers on Gettr,” Dillon said to Rogan, in remarks highlighted by the Daily Beast.

“It’s not real, though,” Rogan responded. “Gettr doesn’t even have 9 million people… This is where the fuckery is. They take all my Twitter followers… and then they port those over.”

“[Gettr is] definitely fugazi,” Rogan added, explaining that the site harvests his tweets by automatically reposting them. “I don’t know how to get off…Gettr,” he said. “I don’t think I can.” Rogan’s Gettr profile is still active, though he hasn’t posted since January 10.