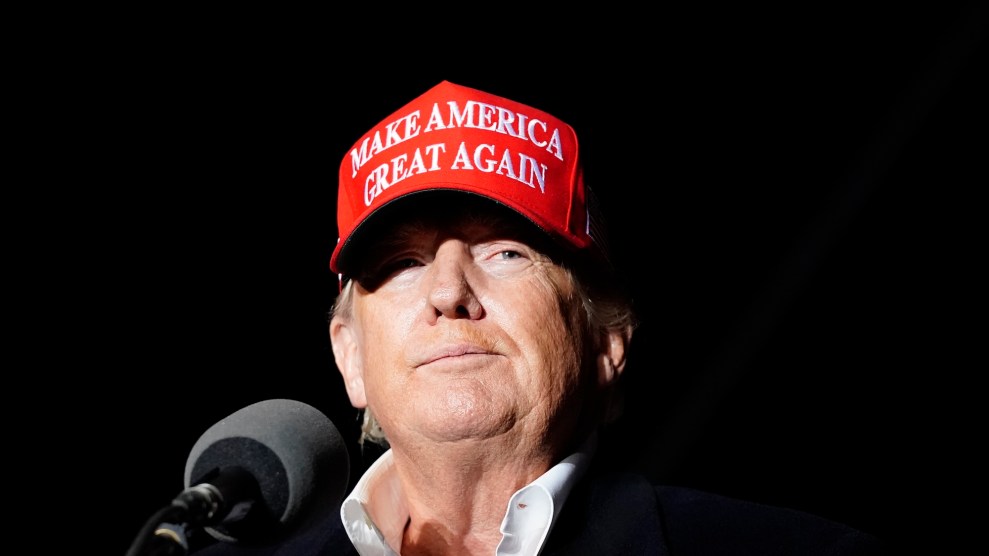 New York Attorney General Letitia James has escalated her investigation into former President Donald Trump’s business practices, telling a judge that she has evidence that the Trump Organization gave lenders and insurance companies incorrect information about the value of his properties for years and that she now needs the court’s help to force Trump and his adult children to cooperate in the probe.

Trump has a long record as a self-promoter who has offered wildly different assessments of his own net wealth and the size of his various properties. For example, on 9/11 he claimed that after the Twin Towers fell, his 40 Wall Street tower was the tallest building in New York when it definitely wasn’t even close. But in the instances outlined by James, the alleged misstatements are potentially quite serious. They were made in annual statements of financial condition—a document regularly prepared by the Trump Organization to assure financial partners about the status of Trump’s company. James’ filing says that “the evidence to date indicates that banks and other financial institutions relied on Mr. Trump’s financial statements in considering whether to grant Mr. Trump and the Trump Organization access to credit and coverage.” If Trump knew he was giving incorrect numbers and deceiving his lenders and insurance companies into giving him better terms or more money than he deserved, it could amount to fraud.

It’s been no secret that James is interested in the inner workings of the Trump Organization—or that Trump and his children weren’t being cooperative. But in the filing late Tuesday night, James laid out what she knows in very specific detail. James’ office included at least 268 exhibits, most of which were sealed. Based on their descriptions, those documents seem to include emails and letters sent by Trump or his children Ivanka Trump and Donald Trump Jr., as well as correspondence between the Trump Organization and financial institutions like Duetsche Bank. Some of the material appears to relate to the financing Trump received for his projects in Washington, DC, and Chicago.

In the early stages of James’ investigation, the Trump Organization was reportedly cooperative and provided documents and executives to talk with the AG’s office. But shortly before the 2020 election, the company seems to have stopped voluntarily cooperating. Eric Trump attempted to avoid talking to James’ investigators, though he eventually relented when a judge rejected his claims that the interview was politically motivated. Last month, however, Trump filed a lawsuit against James seeking to block her from interviewing him, Ivanka Trump, and Donald Trump Jr. and called the whole investigation a politically motivated fishing expedition.

“For more than two years, the Trump Organization has used delay tactics and litigation in an attempt to thwart a legitimate investigation into its financial dealings,” James said in a statement Tuesday night. “Thus far in our investigation, we have uncovered significant evidence that suggests Donald J. Trump and the Trump Organization falsely and fraudulently valued multiple assets and misrepresented those values to financial institutions for economic benefit.”

James recently flirted with a run for governor but in early December announced she would not join the race. Still, in their lawsuit against James, the Trumps have asserted, even after she said she wouldn’t run, that her investigation was politically motivated. In a statement released by the Trump Organization on Wednesday, the family mocked the investigation as a campaign stunt.

“The only one misleading the public is Letitia James. She defrauded New Yorkers by basing her entire candidacy on a promise to get Trump at all costs without having seen a shred of evidence and in violation of every conceivable ethical rule,” the statement reads. “Three years later she is now faced with the stark reality that she has no case. So, in response to Trump suing her and filing multiple ethical complaints, and on the heels of her failed governor’s race, she has no choice but to mislead the public yet again by misrepresenting the facts and ignoring her own inflammatory comments. Her allegations are baseless and will be vigorously defended.”

James’ new filing includes fairly detailed allegations that the Trump Organization regularly presented different sets of numbers about how much various properties were worth. For example, James says the Trump Organization created statements of financial condition that showed that the Trump Tower triplex that was Trump’s main residence before becoming president was worth as much as $327 million and based that figure on the fact that the apartment was 30,000 square feet. But the apartment is allegedly nowhere near that size—James says that Trump Organization CFO Allen Weisselberg testified that it was only about 10,000 square feet and that the $327 million evaluation was inflated by “give or take” $200 million.

James’ filing contends that other misstatements in the Trump Organization’s statements of financial condition include:

In her filing, James asked the judge in the case for help compelling Trump, Ivanka Trump, and Donald Trump Jr. to testify. Through 2016, James says, Trump himself signed off on the accuracy of the financial statements sent to banks and insurance companies and Trump Jr. certified the documents stating the value of the trust that holds all of his father’s assets. James says she wants to talk to Ivanka Trump because, before her father became president, she served as the Trump Organization’s main point of contact with its largest lender, Deutsche Bank.