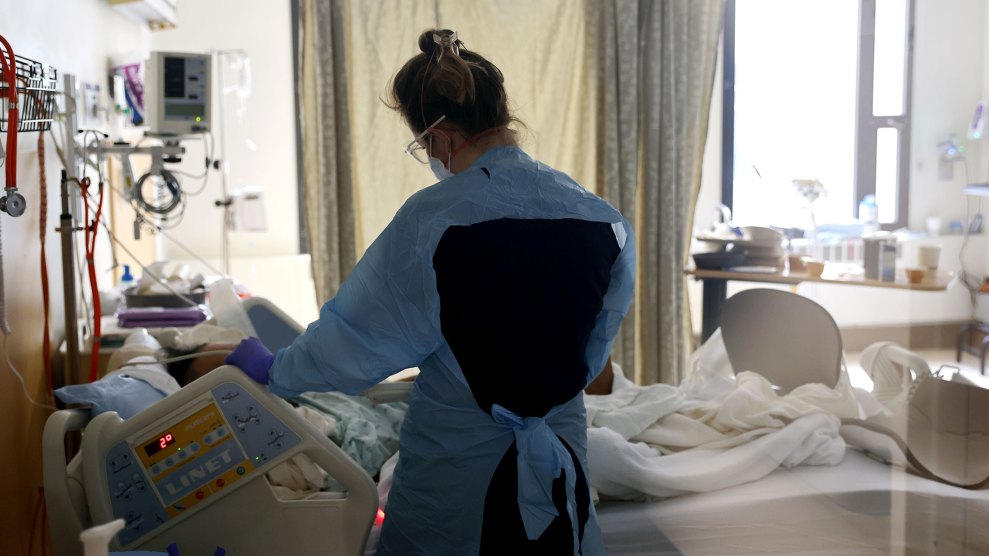 A nurse checks on a patient in the acute care Covid-19 unit at the Harborview Medical Center on January 21, 2022 in Seattle, Washington. Karen Ducey/Getty Images

Covid cases have started dropping nationally, and in many states, after the Omicron variant infected millions of people at a rate higher than at any point in the two years of the pandemic.

The New York Times reports this weekend that in recent days the United States was averaging about 720,000 new cases per day, down from 800,000 last week, according to its data tracking system. But even with the drop in hospitalizations and infections, the Times notes, “The threat has by no means passed”:

The United States continues to identify far more infections a day than in any prior surge, and some states in the West, South and Great Plains are still seeing sharp increases. Many hospitals are full. And deaths continue to mount, with more than 2,100 announced most days.

But following a month of extraordinary rates of case growth, blocklong lines at testing centers and military deployments to bolster understaffed I.C.U.s, the declining new-case tallies offered a sense of relief to virus-weary Americans, especially in the Northeast and parts of the Upper Midwest, where the trends were most encouraging. After another round of masking up or hunkering down, some were considering what life might look like if conditions continued to improve.

But it’s not all good news: I live in one of those southwest states where Covid infections are still rising, and I am still seeing the graph trend up with more Covid infections than ever before. And the data shows things worsening in Utah, which is averaging 11 times as many Covid cases a day compared to a month ago, and in North Dakota and Alabama, which are also reaching record level of infections. Plus, even in places like New York where cases are falling, deaths continue to rise. Times data shows there are more fatalities announced each day than at any point since the first months of the pandemic in New York.

At the same time, I’d like to think the worst of Omicron will be behind us soon. The Times reports that in states where new cases have fallen, “the declines have so far been swift and steep, largely mirroring the rapid ascents that began in late December”:

Those patterns have resembled the ones seen in South Africa, the country whose scientists warned the world about Omicron, and the first place to document a major surge of the variant. New cases in South Africa have fallen 85 percent from their mid-December peak, to about 3,500 cases a day from a high of 23,400, though they remain above the levels seen in the weeks before Omicron took hold.

Scientists said it remained an open question whether Omicron marked the transition of the coronavirus from a pandemic to a less-threatening endemic virus, or whether future surges or variants would introduce a new round of tumult.

“It’s important for people to not be like, ‘Oh, it’s over,’” said Aubree Gordon, an epidemiologist at the University of Michigan. “It’s not over until we get back down to a lull. We’re not there yet.”