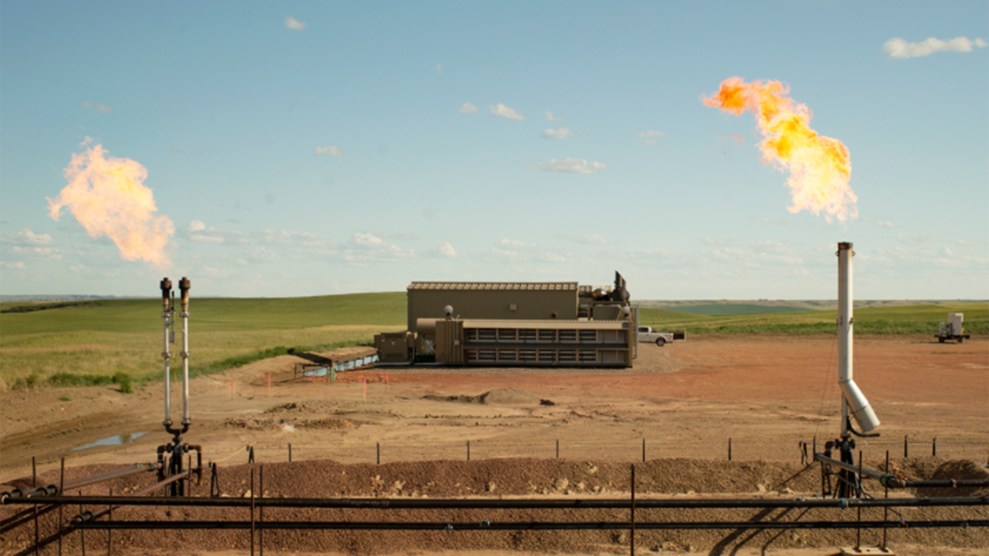 Crypto miners chase cheap energy—even setting up shop on oil and gas pads to utilize methane that otherwise would be flared. This image depicts a flare mitigation center in Montana.Crusoe Energy

The gradual shift of life away from the three-dimensional space to cyberspace once promised a Jetsons-style efficiency, a tidy transition from physical stuff’s environment-harming ways to a clean and impact-free digital world. We would telecommute through cyberspace rather than along dirty highways in polluting cars, working in paperless offices where no trees were sacrificed to print memos and correspondence. And, instead of using coins made from mined metals, we’d switch to digital currency—no mines, no blasting, no gouging required.

The Jetsons had it right, sort of: The Covid-sparked Zoom Boom has left many physical offices empty and drastically reduced mind-numbing, gas-guzzling commutes. Cash and coins are increasingly passé. And when was the last time you received a paper interoffice memo? The mass migration from physical to digital, however, has yet to take all the pressure off the physical environment. That’s because what happens in cyberspace doesn’t stay in cyberspace.

Every office email, every social media “like,” every credit card transaction and telecommuter call still has to be processed by physical computers—real machines that use real energy and water and have real environmental impacts. Even cryptocurrency, or Bitcoin, which lacks a physical presence of its own, must be “mined” in an energy-intensive way.

Thousands of servers, storage units and network devices stacked in warehouses across the West suck juice from the grid to process millions of transactions.

Thousands of servers, storage units, and network devices stacked up in sprawling warehouses across the West—on the fringe of Phoenix, Arizona, along the Columbia River, and even in Wyoming’s hinterland—suck juice from the grid to process millions of transactions. The electricity becomes equipment-straining heat, which must be shed using water or more electricity. Instead of seeking veins of gold or silver, cryptocurrency miners chase cheap energy—even setting up shop on oil and gas pads to utilize methane that otherwise would be flared—because more power use equals greater computing capacity, which equals higher profits.

As is the case with any sort of profligate energy use, the impacts depend upon where the electricity comes from. Google, Amazon and Facebook purchase solar and wind power, even build their own renewable energy facilities, to run their data centers. And a few Bitcoin miners have promised to power their operations entirely with excess solar power during times of low grid demand. That would certainly help solar—but so far the promise has yet to be realized on any large scale.

Power-guzzling and cryptocurrency: an inseparable pair

Cryptocurrency mining is often characterized as an act of solving a set of complex equations, evoking images of a Red Bull-guzzling genius hunched over a calculator searching for the Bitcoin-creation formula. But actually it’s less about calculation than it is about trial and error—making guesses in hopes of landing on a random, 64-digit number. Whoever has the most energy-intensive computing power can make the most guesses in a short time frame, and whoever makes the most guesses likely will solve the puzzle first, and will be rewarded for their “proof of work” with one of a finite number of bitcoins. Or, to put it another way, the more power one uses, the more likely they are to hit the jackpot. As the value of each cryptocurrency increases, so does the number of miners. More miners means more computing power means more electricity consumed. Some cryptocurrencies are considering moving away from “proof of work” to a “proof of stake” system that uses less electricity but is also less secure.

In the early days of Bitcoin’s creation, people could “mine” the coins using a powerful standard desktop computer. But with each bitcoin that is mined, the process of acquiring the next one requires more computing power and therefore more energy. Now that 18.5 million of the 21 million bitcoins in existence have been mined, only huge banks of cryptocurrency mining “rigs” can provide enough computing power to be successful. That, in turn, requires huge amounts of energy.