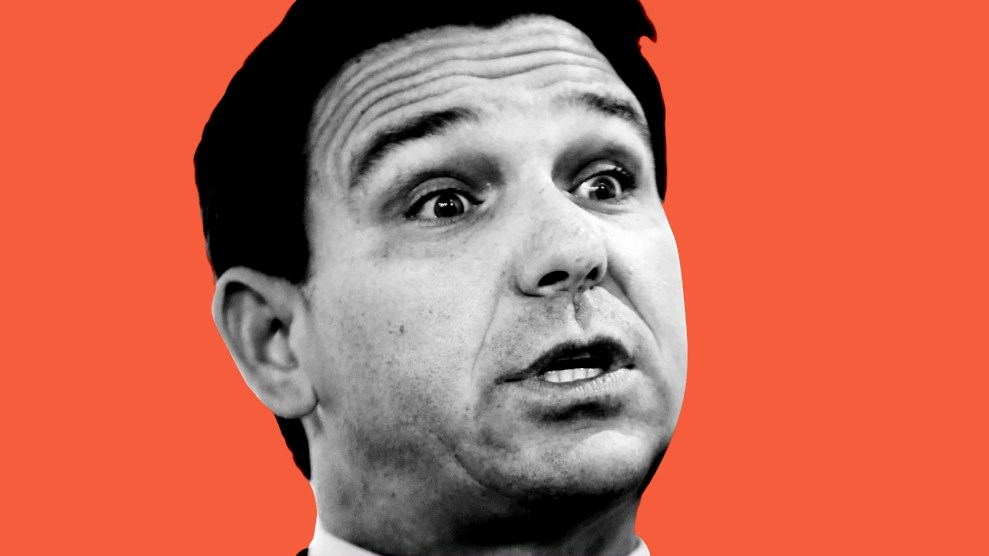 The word that was once a rallying cry for Black Americans to stay alert to racial injustices has been co-opted by the conservative right to denounce any educational, cultural, or policy position that attempts to reckon with our nation’s racist history. People appropriate the language of Black struggle all the time. Like a game of telephone, the more politicians use a phrase as shorthand for things-I-don’t-like, the less it means. Take your pick of victims: socialism, critical race theory, Black Lives Matter. On the right, these have become less ideas to be discussed than large, blinking, neon signs to indicate destruction of conservatives’ idea of “America.”

Arguably no one has done more to dilute the meaning of “woke” than Republican Florida Governor Ron DeSantis. When the potential 2024 GOP nominee proposed legislation to ensure that a student “not be made to feel discomfort, guilt, anguish, or any other form of psychological distress on account of his or her race,” he named it The Stop the Wrongs to Our Kids and Employees Act. Get it? “Stop W.O.K.E.,” for short.

But that’s hardly the start of it. We dug up some examples of DeSantis’ attempts to label anything that bugs him as “woke.” And, don’t worry, this list is a work in progress.

Transportation Secretary Pete Buttiegieg has clearly read The Power Broker. “If an underpass was constructed such that a bus carrying mostly Black and Puerto Rican kids to a beach…in New York was designed too low for it to pass by,” he said at a press conference in November, “that obviously reflects racism that went into those design choices.”

DeSantis disagrees. “I heard some stuff, some weird stuff from the Secretary of Transportation trying to make this about social issues,” he said afterward. “To me, a road’s a road.”

Earlier this month, he doubled down on his oblivious-to-history position, this time with a neologism that gives “yassification” a run for its money. Referring to provisions of President Biden’s bipartisan infrastructure bill, he said, “There’s trees they’re putting in. They’re saying that highways are racially discriminatory. I don’t know how a road can be that. This is the woke-ification of federal policy, when you see this stuff.”

"There's trees they're putting in, they're saying that highways are racially discriminatory, I don't know how a road can be that." pic.twitter.com/0lQyhYDcPc

In a November 2021 address to the Republican Jewish Coalition in Las Vegas, DeSantis babbled about various -isms he failed to define. After randomly alluding to Trump’s first impeachment, he said, “You also look at what animates so many of these people. It’s a woke ideology, which I think is much more dangerous than simply saying it’s socialism. It is, but it’s much more pervasive. It’s a form of cultural marxism.”

Nice. That’s a three for one right there. But, just wait. Then, the whopper: “Let’s just be clear. The woke are anti-Semitic. They are anti-Israel. We know that.”

Conflation of anti-Zionism with anti-Semitism, what a kicker.

In December, the governor’s office released a statement entitled, “Governor DeSantis Takes Action Against Communist China and Woke Corporations.” I’m honestly a little confused about what’s going on here, but DeSantis seems to be condemning what he perceives to be Chinese influence in Florida business. “If you look at how these major companies behave when faced with Chinese disapproval, they censor what the CCP tells them to censor and we see groveling apologies,” he said in the statement. No word on which particular companies he may have been referring to. But the gist seems to be that Florida will attempt to make sure its tax dollars don’t go to Chinese firms. Why include woke in this at all? Habit? Unclear.

At the Common Sense Society Conference and Gala in late January, DeSantis spouted off against DEI consultants, “corporate wokeness,” virtue signaling, and an education system that teaches kids “to hate our country or to hate each other.”

“The goal is to delegitimize the founding of this country, the principles that the founders relied on, our institutions, our Constitution, to tear basically at the fabric of our society,” he continued. “This wokeness is dangerous, and we’ve got to defeat it on all fronts.”

At this hit rate, Ron DeSantis will have trouble defeating wokeness. To him, it seems to be nearly everything.

This is a growing list. Please email us if you know of another instance of Ron DeSantis calling something”woke.”