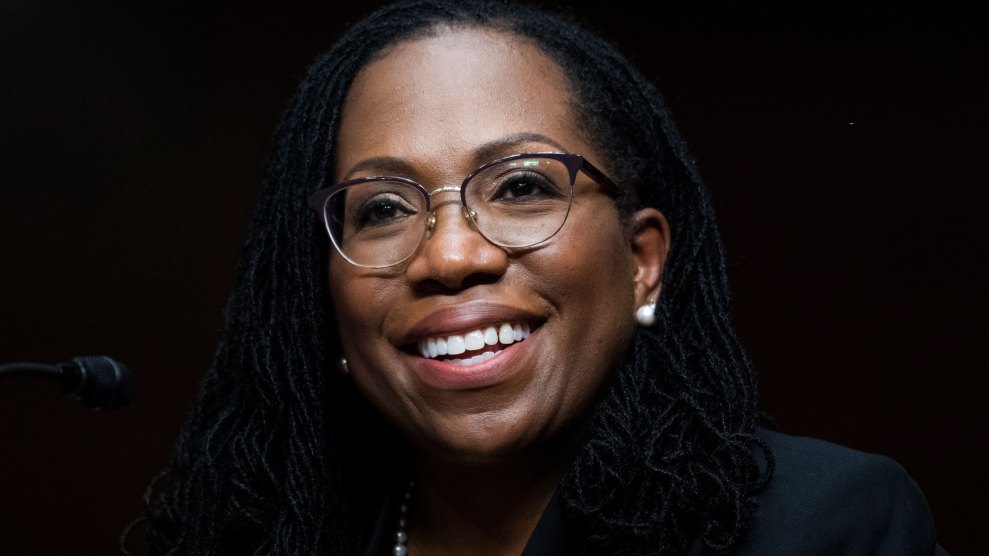 Ketanji Brown Jackson testifies during her Senate Judiciary Committee confirmation hearing to be US Circuit judge for the DC Circuit.Tom Williams/CQ Roll Call

Supreme Court confirmation hearings are often more a forum for primetime senatorial grandstanding and culture war skirmishes than a process for eliciting useful information from the nominees. That’s likely to be even more true when the Senate Judiciary Committee convenes to consider President Joe Biden’s eventual nominee to replace retiring Justice Stephen Breyer. After all, some Republicans have already said they won’t support anyone Biden nominates—especially if he follows through on his pledge to nominate the court’s first Black woman. “This new justice will probably not get a single Republican vote,” Sen. Roger Wicker (R-Miss.) told a local radio show after suggesting that a Black woman nominee would be a “beneficiary” of “affirmative racial discrimination.”

For a preview of how all this might play out in a confirmation hearing, Republican senators’ treatment of DC Circuit Judge Ketanji Brown Jackson, one of Biden’s Supreme Court shortlisters, offers some clues. Jackson appeared before the Senate Judiciary Committee last April after Biden nominated her to replace now–Attorney General Merrick Garland on the powerful DC Circuit Court of Appeals.

Members of the judiciary committee were aware that she was a Supreme Court contender. President Barack Obama had considered Jackson for the high court in 2016 to replace the late Justice Antonin Scalia, but at the time, she was seen as somewhat inexperienced because she had been a federal district judge for only three years. Obama instead tapped Garland, a 19-year veteran of the DC Circuit Court of Appeals, which was just as well. Senate Republicans blocked his appointment to hold the seat open for President Donald Trump, who then appointed Justice Neil Gorsuch.

After taking office last year, Biden promptly nominated Jackson to the DC Circuit, a court that’s been a stepping-stone to the Supreme Court for several justices, including Brett Kavanaugh, Clarence Thomas, Ruth Bader Ginsburg, Scalia, and Chief Justice John Roberts. Given the current political climate, Jackson’s April confirmation hearing was fairly demure, with Republican senators trying to be on their best behavior for the cameras and only occasionally failing. Sen. John Cornyn (R-Texas), for instance, mumbled a few things about how the public has more confidence in the court when Americans know that “people like them can serve on the bench, and we applaud that diversity,” before going on to ask a question never posed to white nominees: “What role does race play, Judge Jackson, in the kind of judge you have been and the kind of judge you will be?”

“Since becoming a legal adult, have you participated in any rallies or demonstrations where you or other participants have willfully damaged public or private property?”

Jackson gracefully replied that “race would be the kind of thing that would be inappropriate to consider in my evaluation of a case.” That said, quoting Oliver Wendell Holmes, she told Cornyn, “The life of the law has not been logic. It has been experience. I’ve experienced life in perhaps a different way than some of my colleagues and that might be valuable, I hope it might be valuable, on the DC Circuit.”

After the hearing, however, Republican senators weren’t so shy in their written follow-up questions to Jackson, many of which bordered on bizarre for any nominee, but when directed at a person of color seem grossly offensive.

Sen. Ben Sasse (R-Neb.), for instance, wanted to know if Jackson, who had by then been a federal district court judge for eight years, had ever participated in a riot. “Since becoming a legal adult, have you participated in any rallies or demonstrations where you or other participants have willfully damaged public or private property?” he asked.

Sasse has asked the riot question of a few other Biden nominees, including another Black woman, Candace Jackson-Akiwumi, whose nomination to the 7th Circuit was considered by the Judiciary Committee at the same hearing with Jackson. But it wasn’t something he felt compelled to ask Federal Circuit Court of Appeals nominee Leonard Stark, one of the two white men Biden has nominated to an appellate court. In fact, Sasse didn’t ask Stark any follow-up questions, though he did ask Toby Heytens, a white man nominated to the 4th Circuit, about any rioting in his past. Sasse’s office did not respond to a request for comment.

By the time Biden nominated Jackson to the DC Circuit last year, she had previously survived two Senate confirmation proceedings, once for her nomination to the DC federal district court and also for her appointment as the US Sentencing Commission vice chair. As a result, she’d already been vetted by Congress and the FBI more thoroughly than some Supreme Court nominees. Nonetheless, Sen. Tom Cotton (R-Ark.) still felt the need to ask in a written follow-up, “Since becoming a legal adult, have you ever been arrested for or accused of committing a hate crime against any person?”

In case the FBI somehow missed this three times, Cotton also asked, “Since becoming a legal adult, have you ever been arrested for or accused of committing a violent crime against any person?” The answer in both cases, of course, was no. Cotton didn’t bother to ask either of the white male circuit court nominees these questions—or any questions, for that matter. But he has quizzed many of the women nominated to the appellate courts, as well as a Latino man, 9th Circuit nominee Gabriel Sanchez, about whether they might be secretly out committing hate crimes and assaulting people. His office did not respond to a request for comment.

Sen. Ted Cruz (R-Texas) has been one of the more outspoken Republican senators on the subject of Biden’s promise to appoint a Black woman to the Supreme Court. On his podcast recently, Cruz declared that such a pledge was “offensive.” Not only that, he insisted, the promise was “an insult to Black women.”

“If he came and said, ‘I’m gonna put the best jurist on the court and he looked at a number of people and he ended up nominating a Black woman, he could credibly say, ‘Okay, I’m nominating the person who’s most qualified,’” the senator said. “He’s not even pretending to say that. He’s saying, ‘If you’re a White guy, tough luck. If you’re a White woman, tough luck. You don’t qualify.’”

So perhaps it’s no surprise that after Jackson appeared in person before the Judiciary Committee, Cruz had a lot of written questions for her about whether she thought various things are racist, like the entire criminal justice system or, well, America.

“President Biden has promised to nominate judges ‘who look like America.’ What do you understand this to mean?” he asked. “Is it appropriate to consider skin color or sex when making a political appointment? Is it constitutional? Is there systemic racism in public policy across America? Is the criminal justice system systemically racist?” In fairness, Cruz did ask Stark and Heytens, the white, male circuit court nominees, similar questions. But he didn’t direct these other, distinctly Karen-focused, Central Park birdwatcher sorts of questions at them:

“Is it appropriate for a witness to a crime to consider the race of the perpetrator when deciding whether to provide information to the police or federal authorities?” Cruz asked Jackson. “Is it racist for a person to call police out of concern over the threatening or unlawful conduct of a person of color?”

Then, Cruz asked Jackson a series of questions he’s thrown up to other Biden appellate court nominees that reflect his recent obsession with critical race theory:

“If you are to join the D.C. Circuit, and supervise along with your colleagues the court’s human resources programs, will it be appropriate for the Court to provide its employees trainings which include the following:
a. One race or sex is inherently superior to another race or sex;
b. An individual, by virtue of his or her race or sex, is inherently racist, sexist, or oppressive;
c. An individual should be discriminated against or receive adverse treatment solely or partly because of his or her race or sex; or
d. Meritocracy or related values such as work ethic are racist or sexist”

Cruz wanted Jackson to commit to opposing any trainings for court employees that “teach that meritocracy, or related values such as work ethic and self-reliance, are racist or sexist.”

Jackson responded by reminding Cruz, who graduated from Harvard Law School a year before she did, that if confirmed, her job would be on the bench, reviewing district court decisions, not in HR vetting the training curricula.

Finally, Cruz wrapped by asking Jackson a question he’s asked a few other female circuit court nominees, but not any male ones:

“Given the information in the public domain, do you believe that Brett Kavanaugh sexually assaulted Christine Blasey Ford?” As Cruz no doubt expected, Jackson declined to comment.