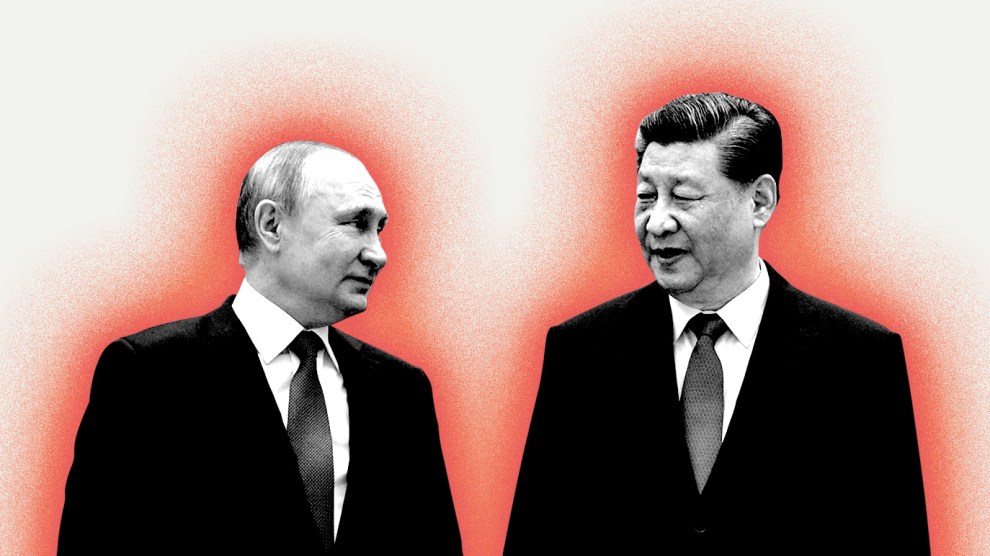 Diplomatic readouts—the official statements issued by governments after heads of states chat—are not usually prone to verbosity. You can expect a few, simple paragraphs, at best, vaguely characterizing the issues discussed. In contrast, when Chinese leader Xi Jinping and Russia’s Vladimir Putin met earlier this month, their countries released a nearly 6,000-word joint statement outlining their shared values at the beginning of a “new era.”

Fewer than three weeks later, this starry-eyed partnership is being put to the test. On Monday, Putin recognized two separatist areas in Ukraine as independent republics and deployed troops into each, leading US officials—after some delay—to call his actions an “invasion.”

While Western nations, including the United States, Germany, and France, have tried to avert war, China has stayed aloof, seemingly torn between breaking with Putin and accepting his expansionist designs on Ukraine. The Global Times, a Chinese propaganda outlet, summed up the tension with an anodyne headline on Tuesday: “China cautiously handles complex Ukraine situation.”

During the Winter Olympics, China’s senior leaders stayed out of public view for over a week, debating in private “how far Beijing should go to back” Putin, the Wall Street Journal reported. Support its new BFF or look responsible—that’s the choice.

“China does not want to be seen as a disruptive power,” says Bonnie Glaser, director of the Asia Program at the German Marshall Fund of the United States. “It actually wants to be seen and prizes its position as a responsible power in the international system.”

“The sovereignty, independence, and territorial integrity of any country should be respected and safeguarded. Ukraine is no exception.”

At issue for China is its desire to maintain its friendly relationship with Russia without antagonizing the West (still a more potent trading partner than Russia). Then there’s China’s own focus on “sovereignty and territorial integrity”—an expression its leaders typically employ when referring to Taiwan—and the appearance of hypocrisy should China criticize Russia’s justification of its actions in Ukraine on the basis of those same principles.

Chinese Foreign Minister Wang Yi asserted these values directly in a speech to European diplomats in Munich on Saturday. “The sovereignty, independence, and territorial integrity of any country should be respected and safeguarded,” he said in a virtual address. “Ukraine is no exception.”

That is almost word-for-word how China responded to Russia’s annexation of Crimea nearly eight years ago. “China always respects all countries’ sovereignty, independence, and territorial integrity,” a Foreign Ministry spokesperson said at the time. To date, Glaser told me, China “has never recognized Russia’s occupation of Crimea.”

Secretary of State Antony Blinken seemed to not-so-subtly remind China of its own position when he tweeted about a call with Wang on Monday:

I spoke with People's Republic of China State Councilor and Foreign Minister Wang Yi. I underscored the need to preserve Ukraine’s sovereignty and territorial integrity.

Even as China refrains from giving Russia its full support, it does not appear in any rush to break with its ally. Bill Bishop, a veteran China watcher who pens a daily newsletter on Chinese politics and culture, said the Chinese government “will try for the gold in rhetorical gymnastics” as it balances “not condemning Russia but hoping to be seen by the EU as not complicit.”

That strategy has created a weird discordance in China’s public statements. On the one hand, China opposes Russia’s invasion and calls for de-escalation. On the other, China supports Russia’s push to leave Ukraine out of NATO and echoes Putin’s own reasoning in its propaganda. A Global Times piece on Tuesday argued that the “root cause of the Ukraine issue is that the US has promoted NATO’s eastward expansion unrestrainedly, thus pushing Russia into a corner where there is no way to retreat.” Putin could not have expressed his own rationale better himself.

China’s state media organs have also rejected the notion that Ukraine could “drive a wedge” between China and Moscow. “Beijing and Moscow remain the main driving force for the development of bilateral relations, not other external factors,” a different Global Times article stated. On Weibo, China’s Twitter-like platform, the Washington Post reported that one propaganda account even mistakenly posted “instructions on Ukraine coverage” that said “no posts unfavorable to Russia or with pro-Western content should be published.”

Russia and China are not fully aligned on all issues and—Xi certainly does not love Russia’s sale of weapons to Vietnam and India—but the two countries “have been very adroit at compartmentalizing their differences,” Glaser said. A potential problem for the Chinese may be getting grouped together with Russia as problem actors on the international stage, which Glaser noted could actually be a “possible” Biden administration strategy. A circumstance, she said, “that would make China increasingly uncomfortable and awkward.”